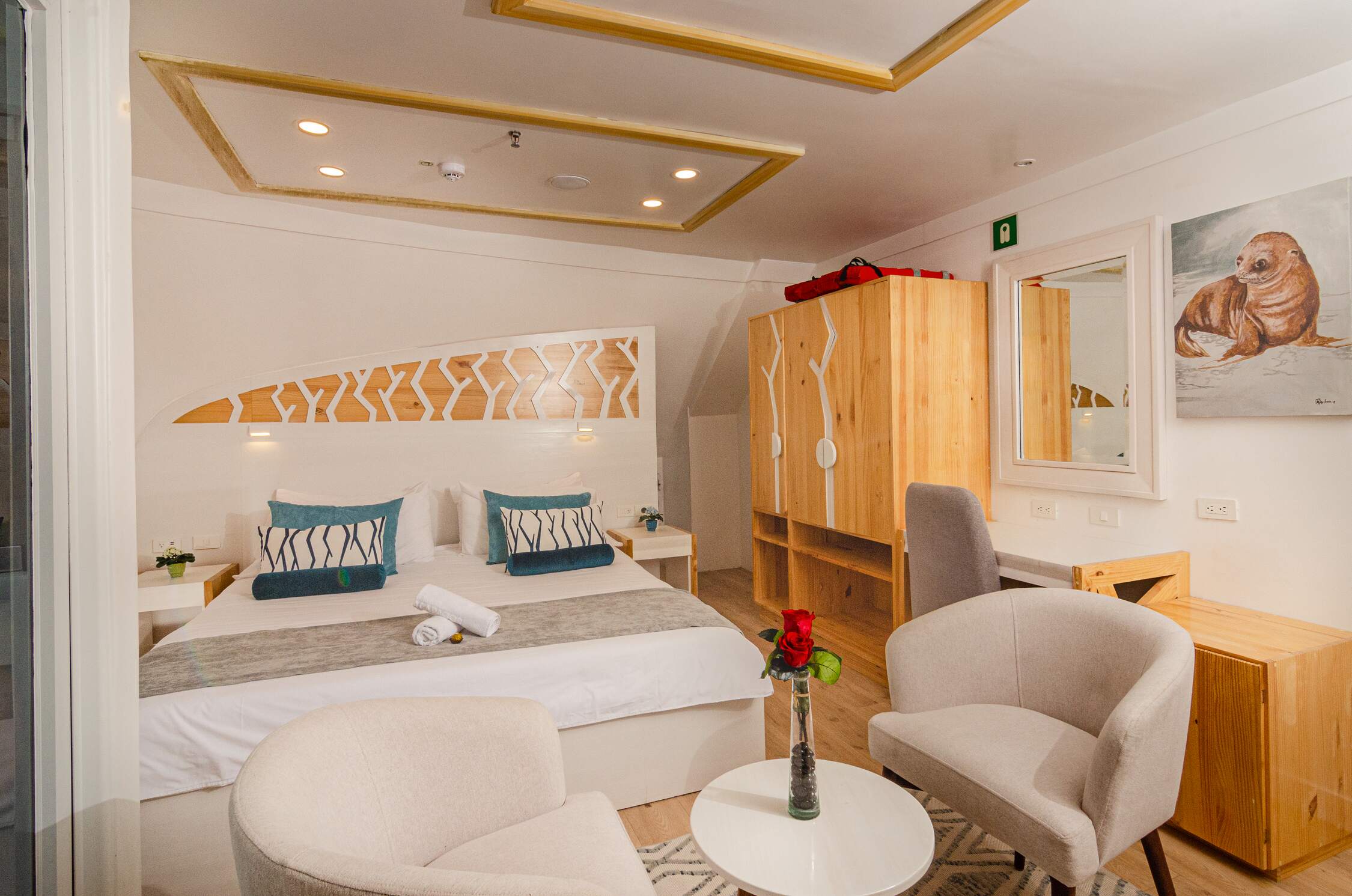 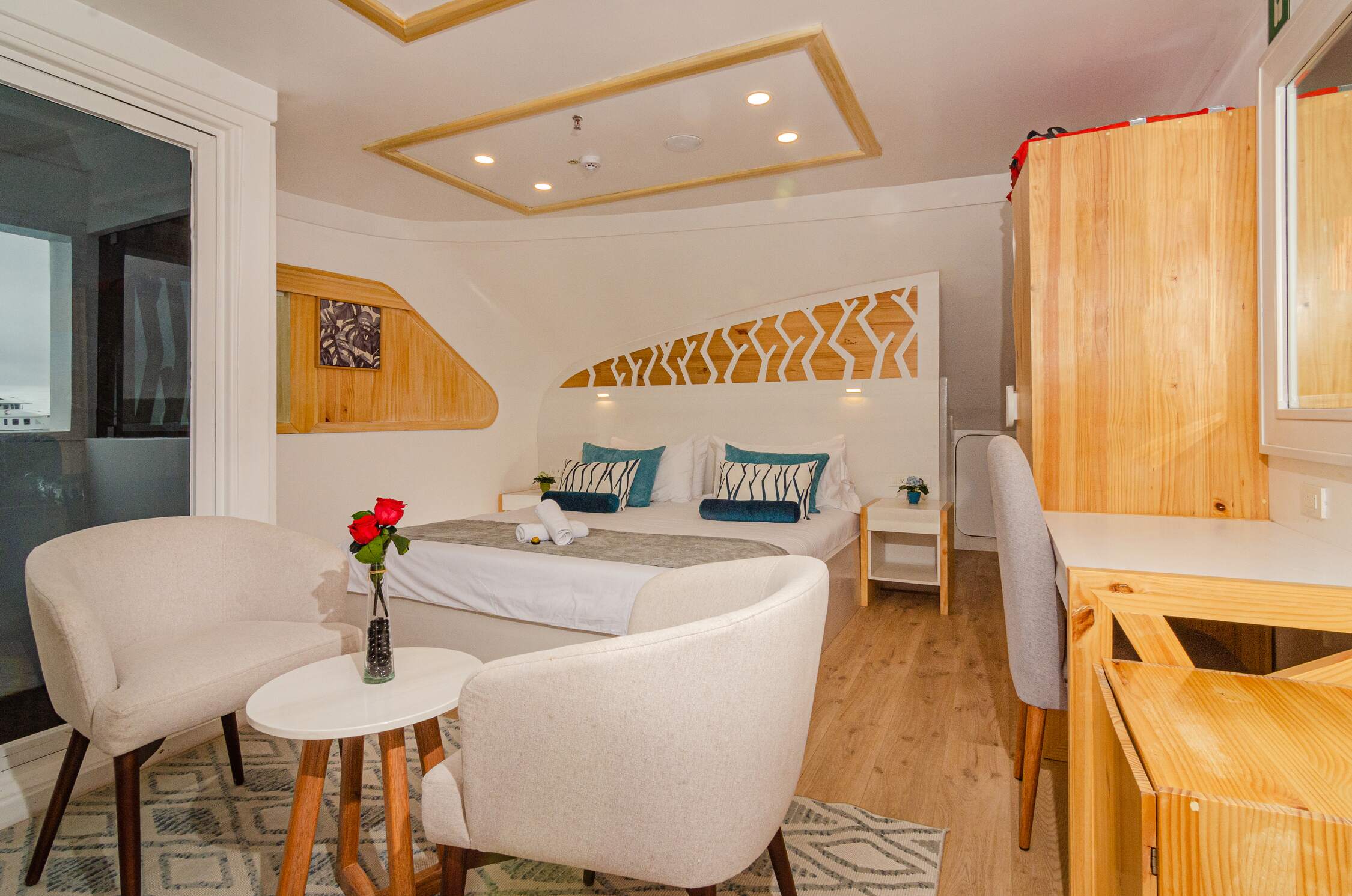 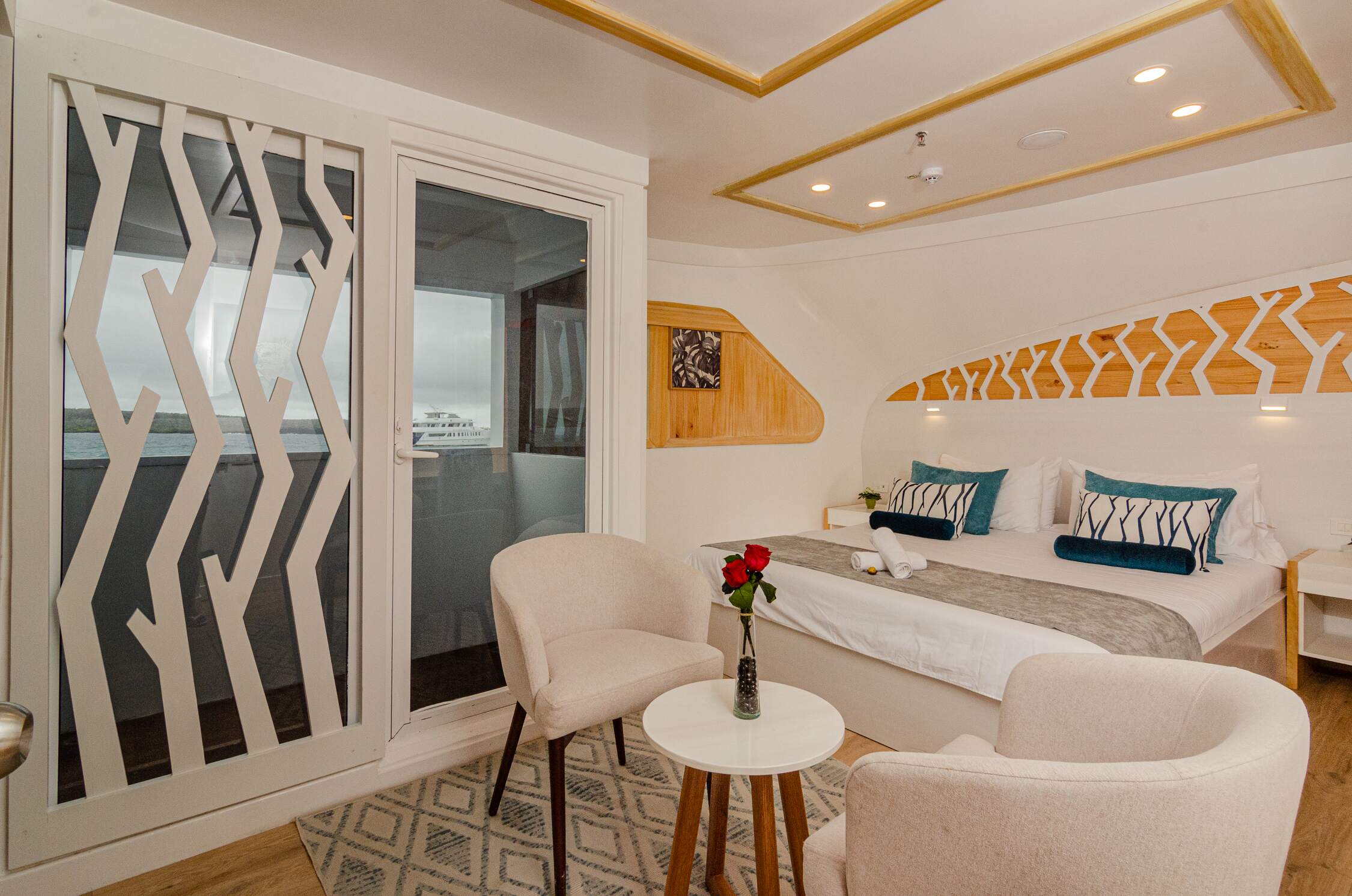 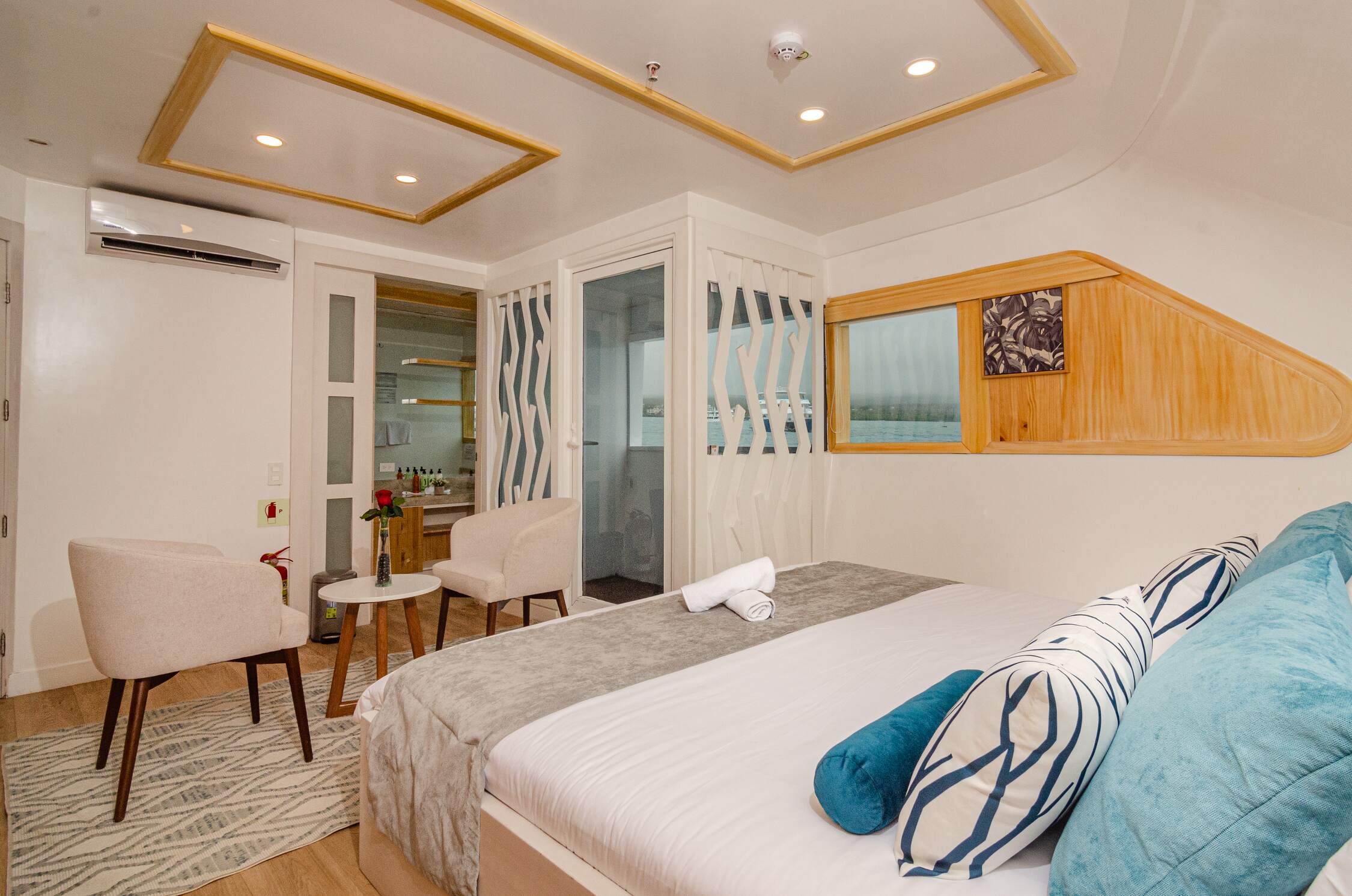 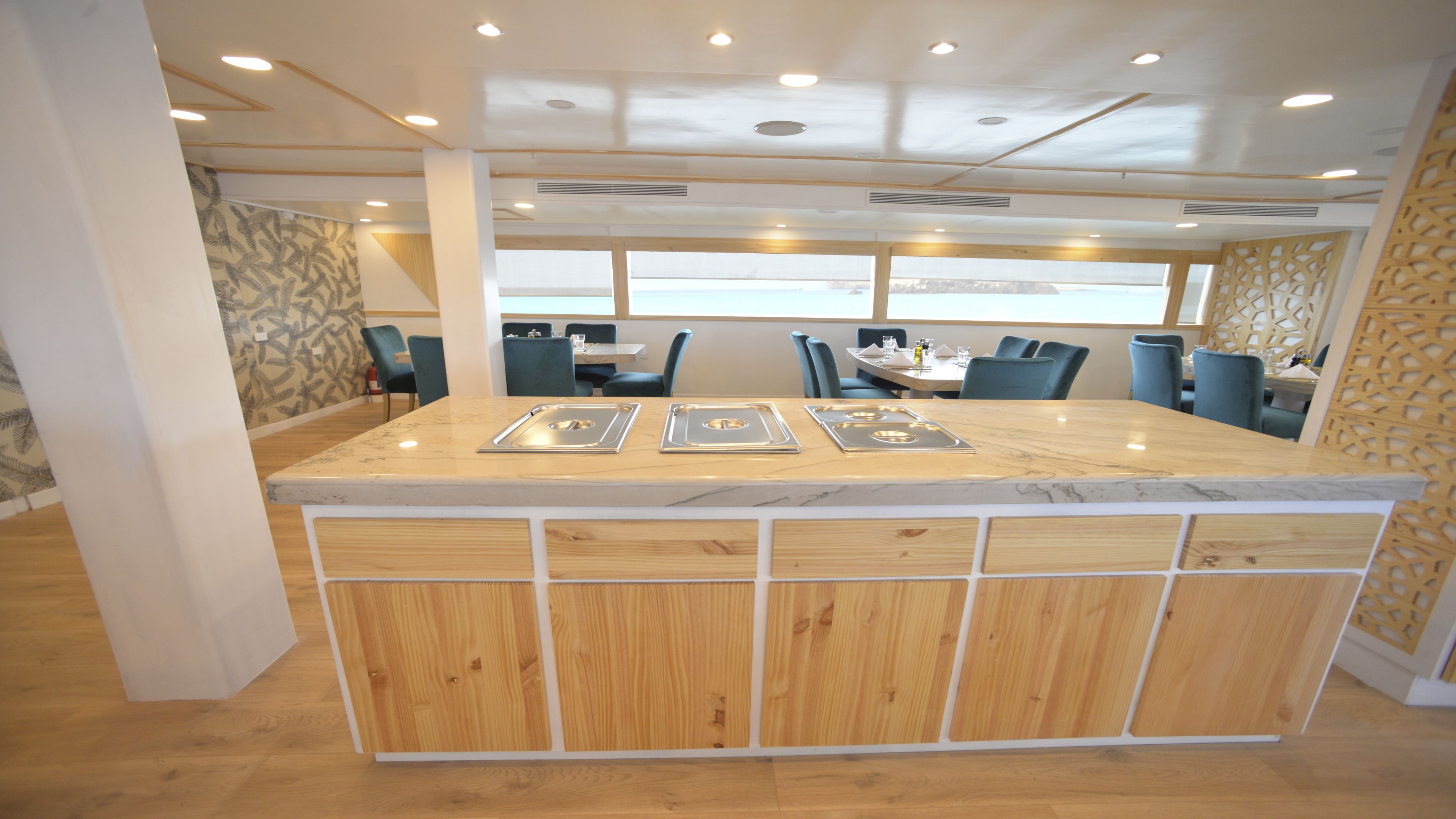 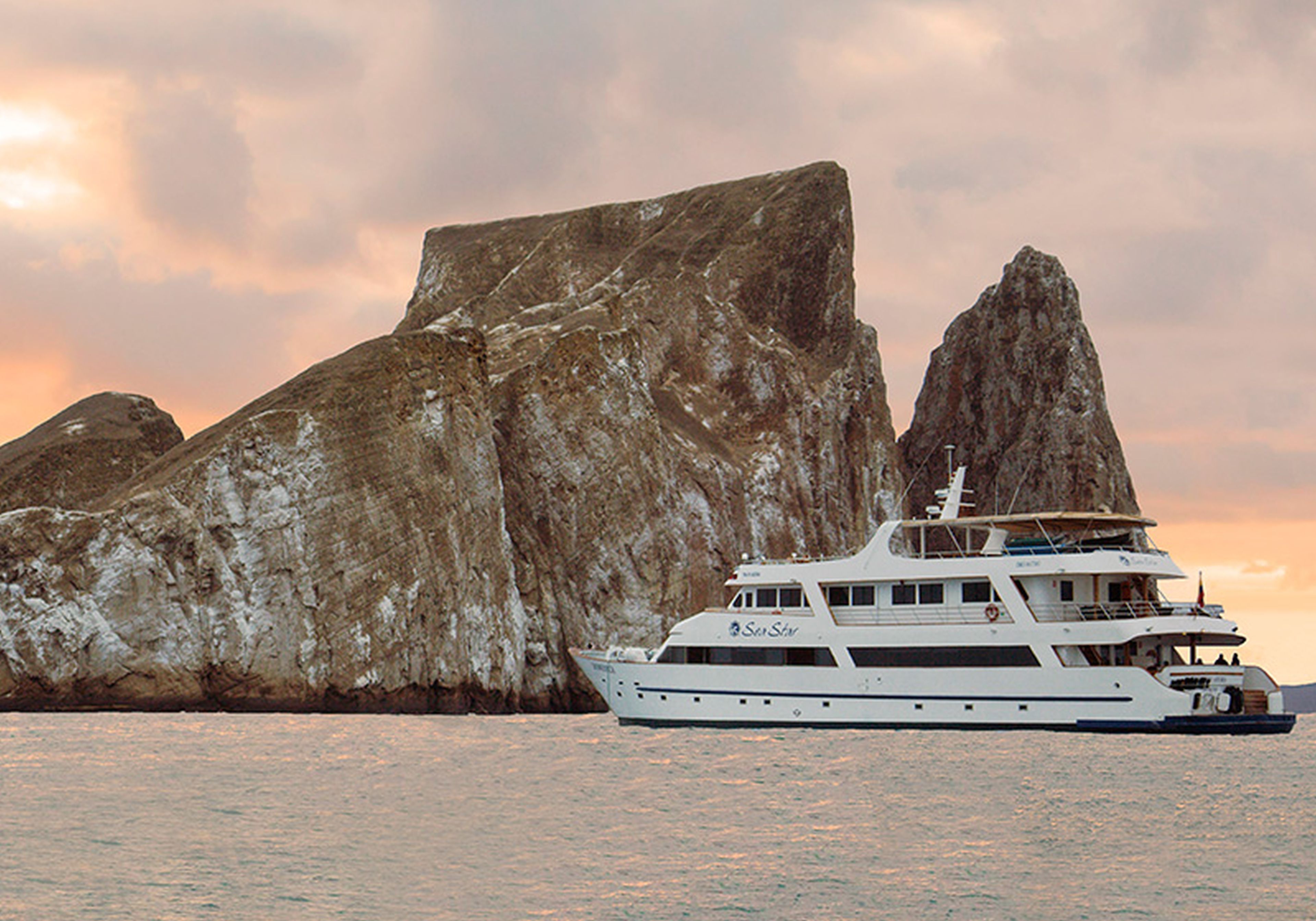 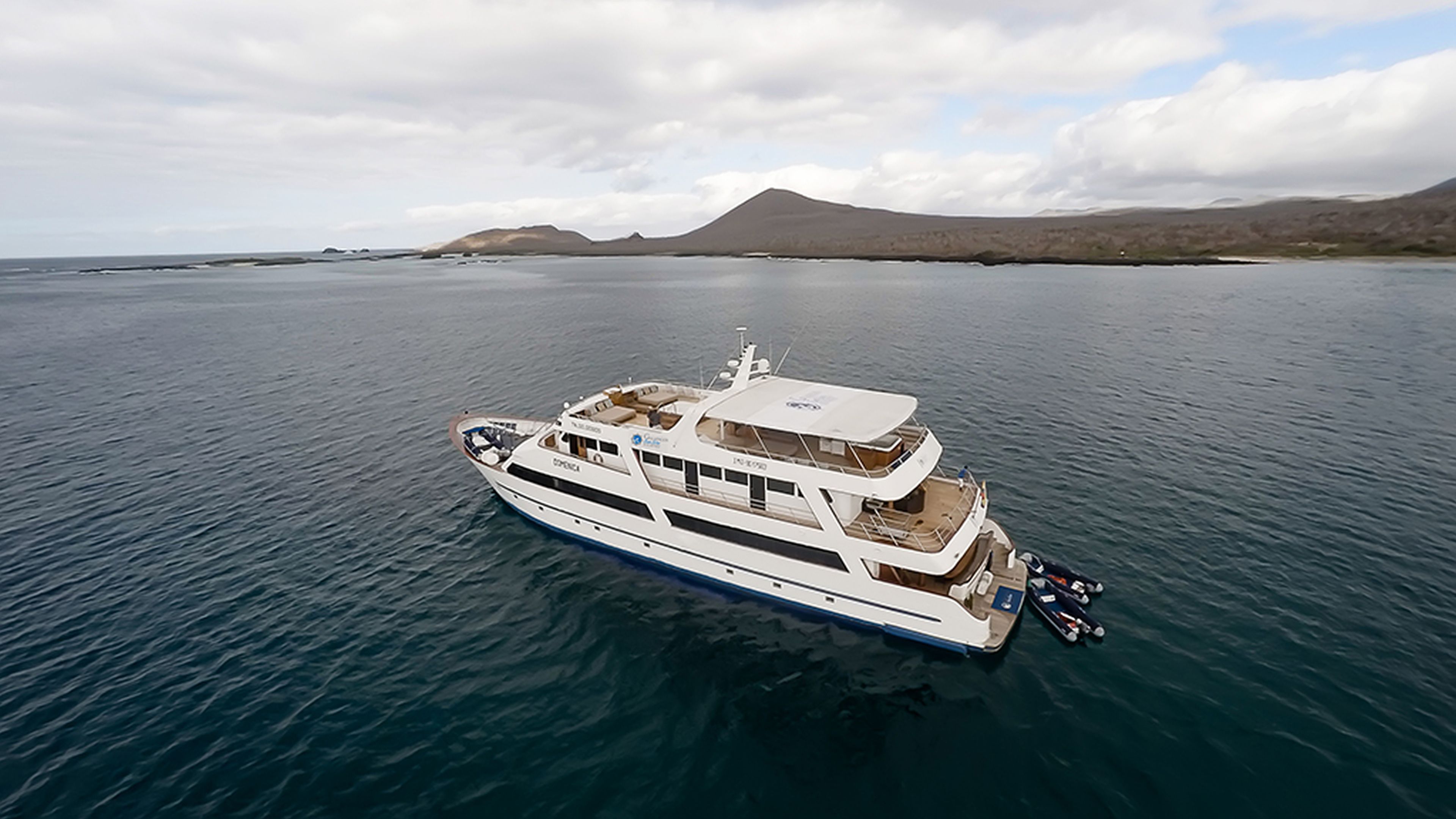 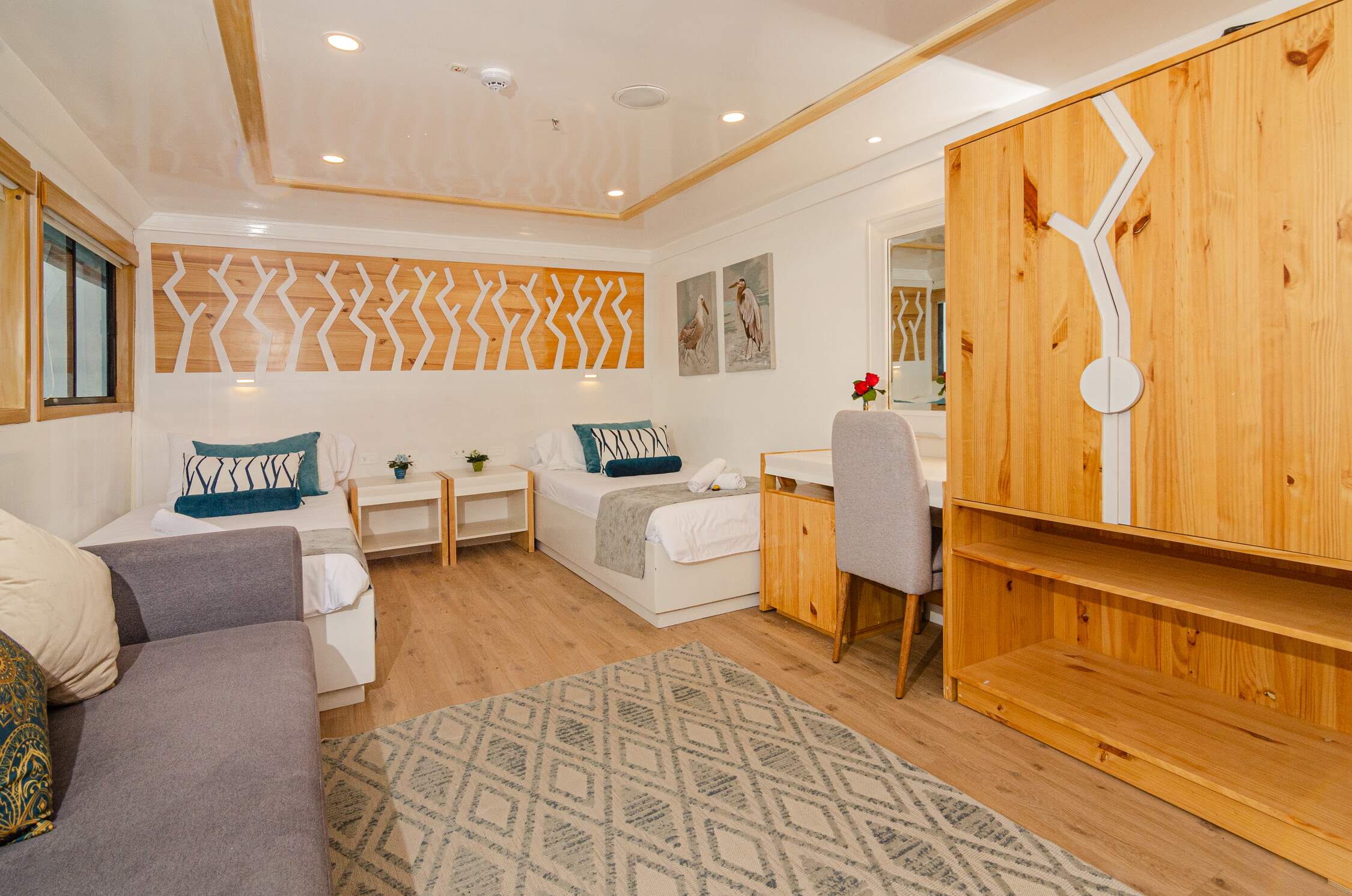 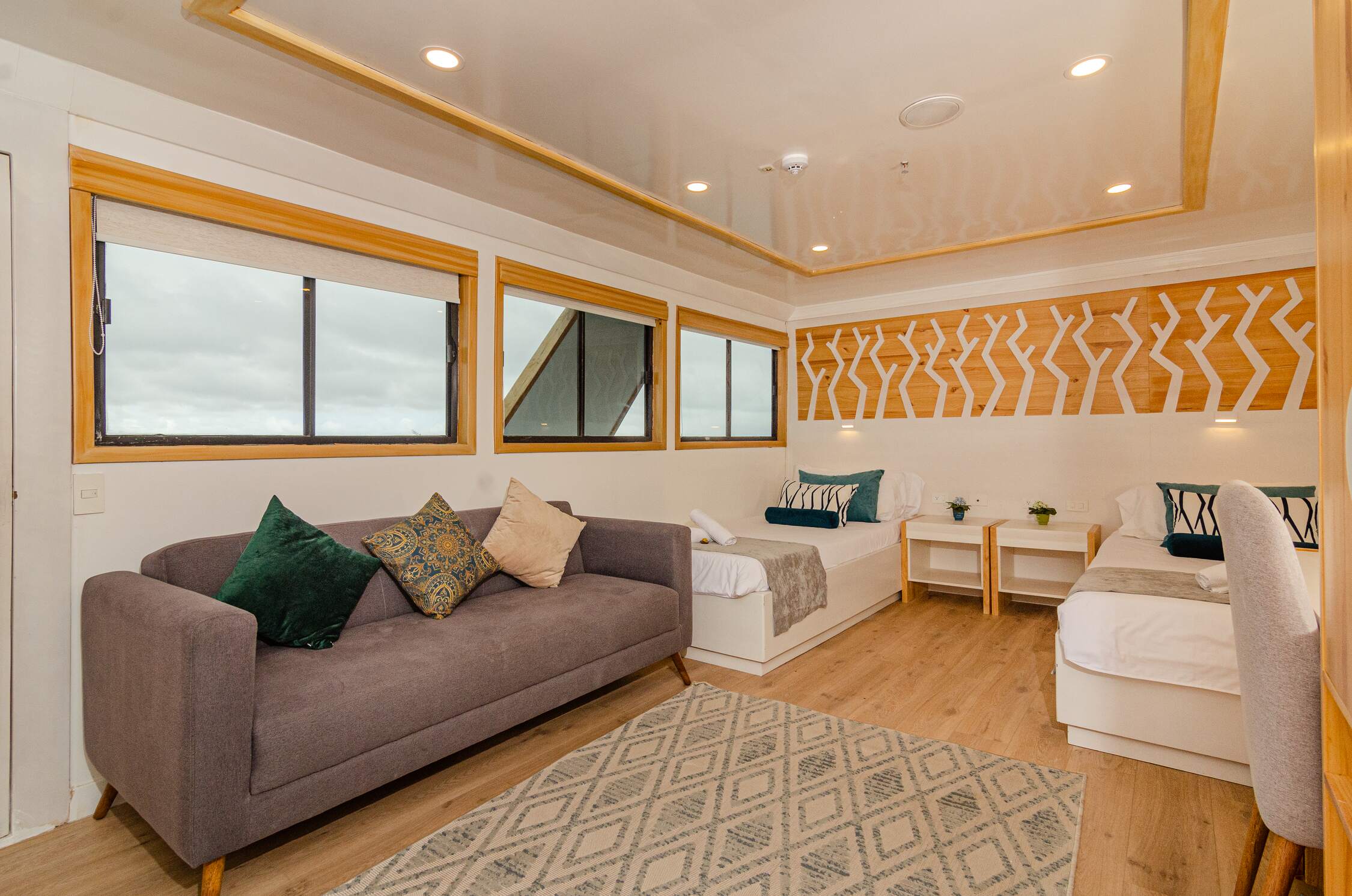 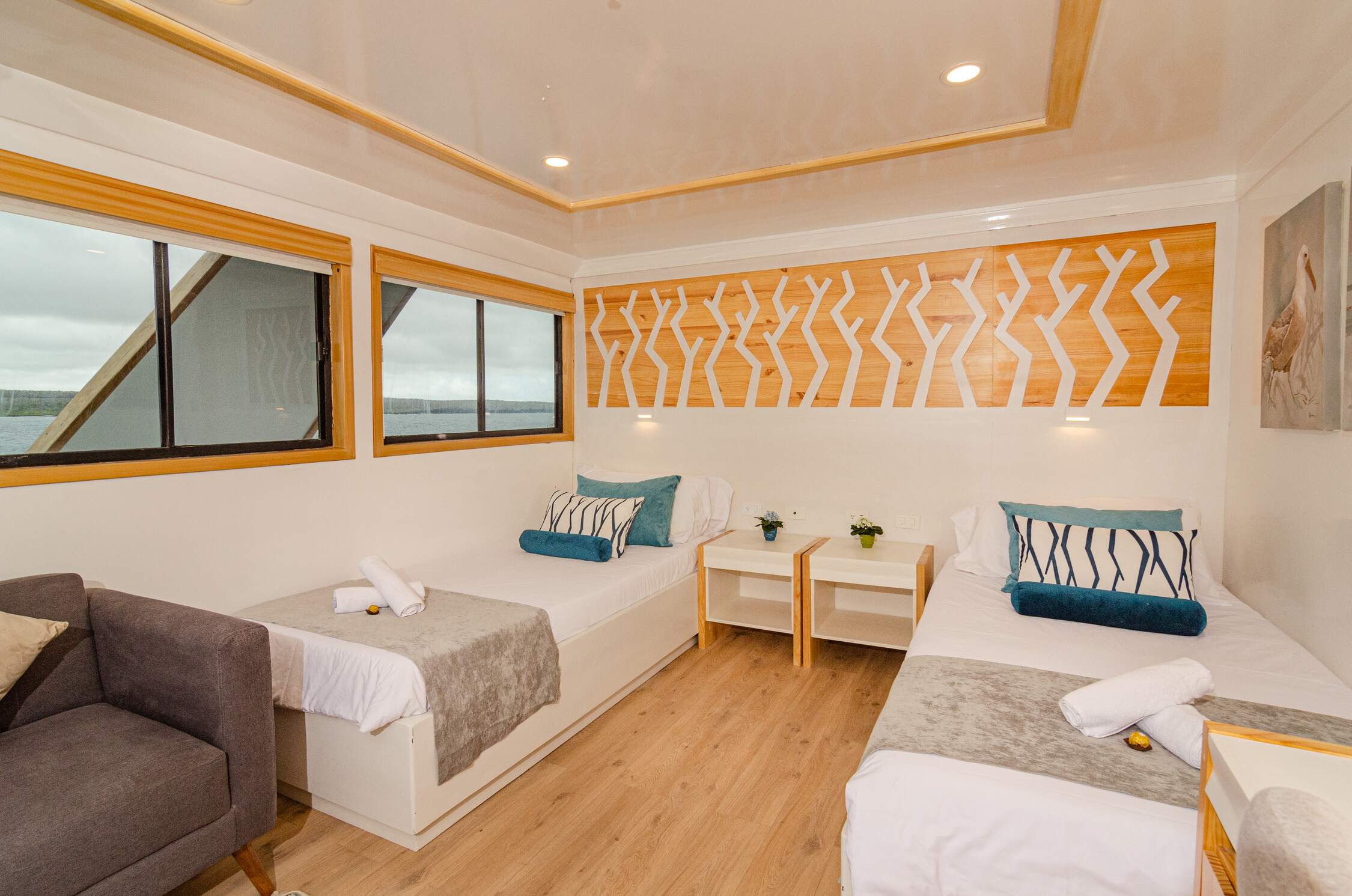 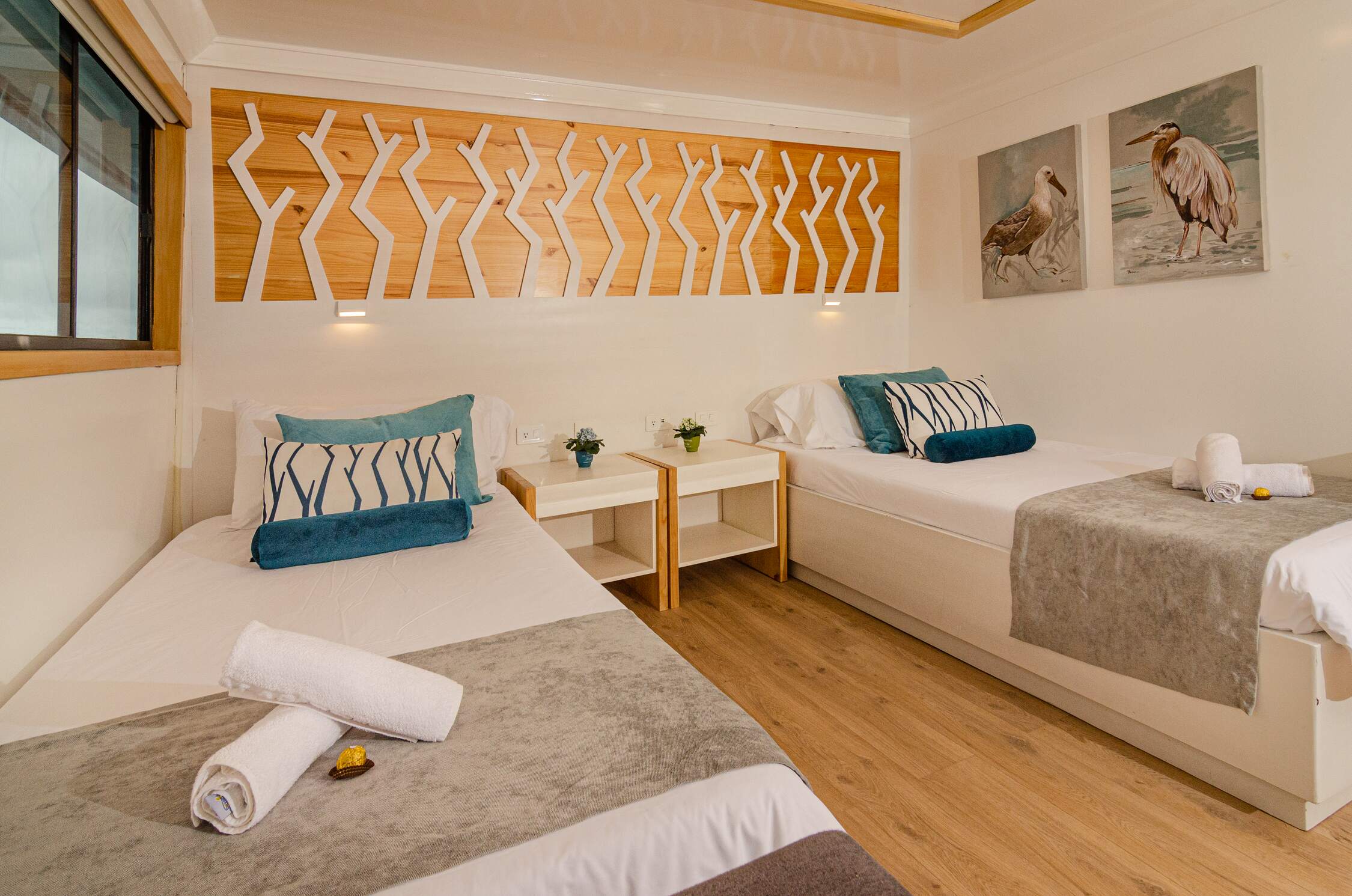 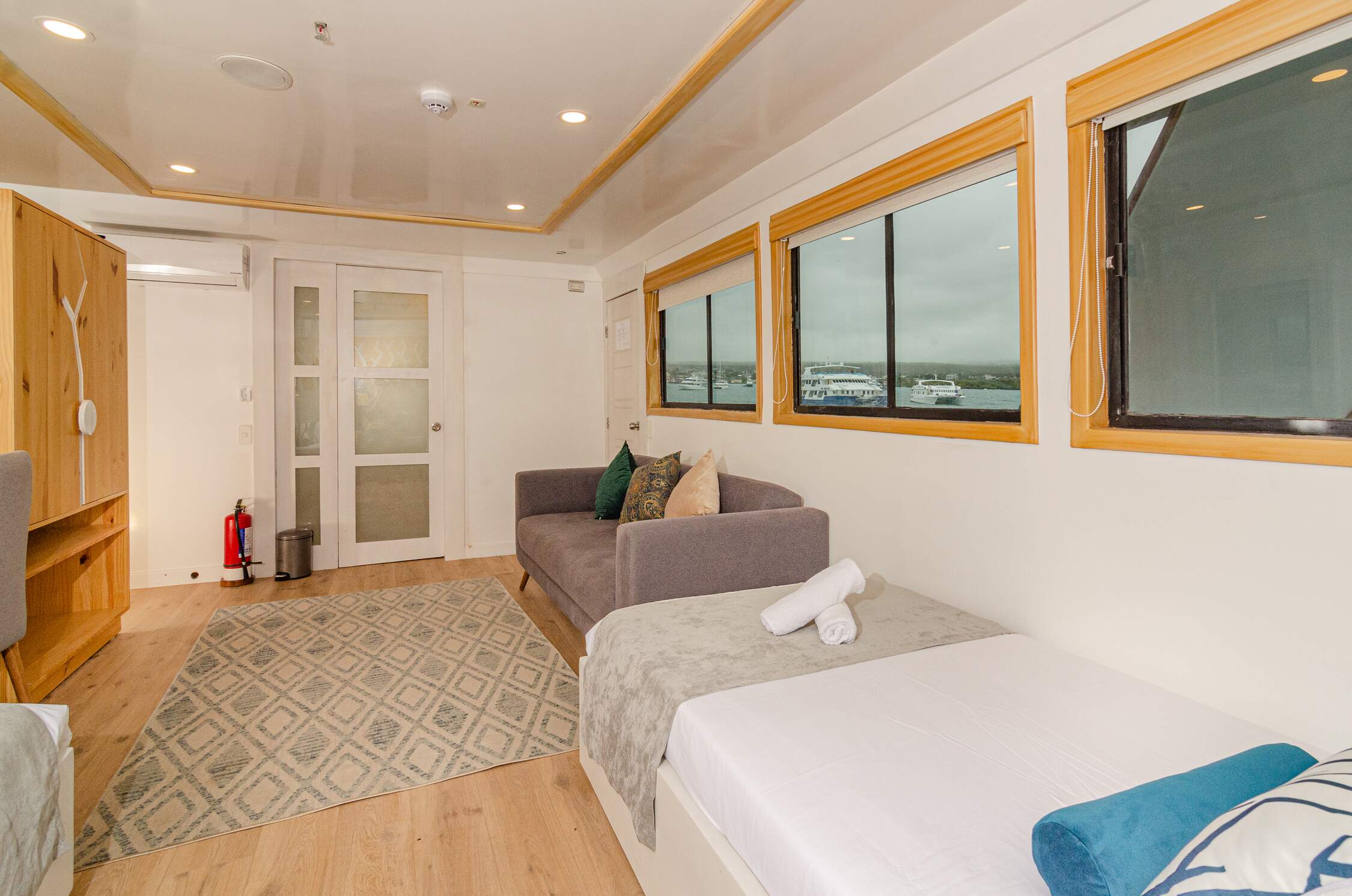 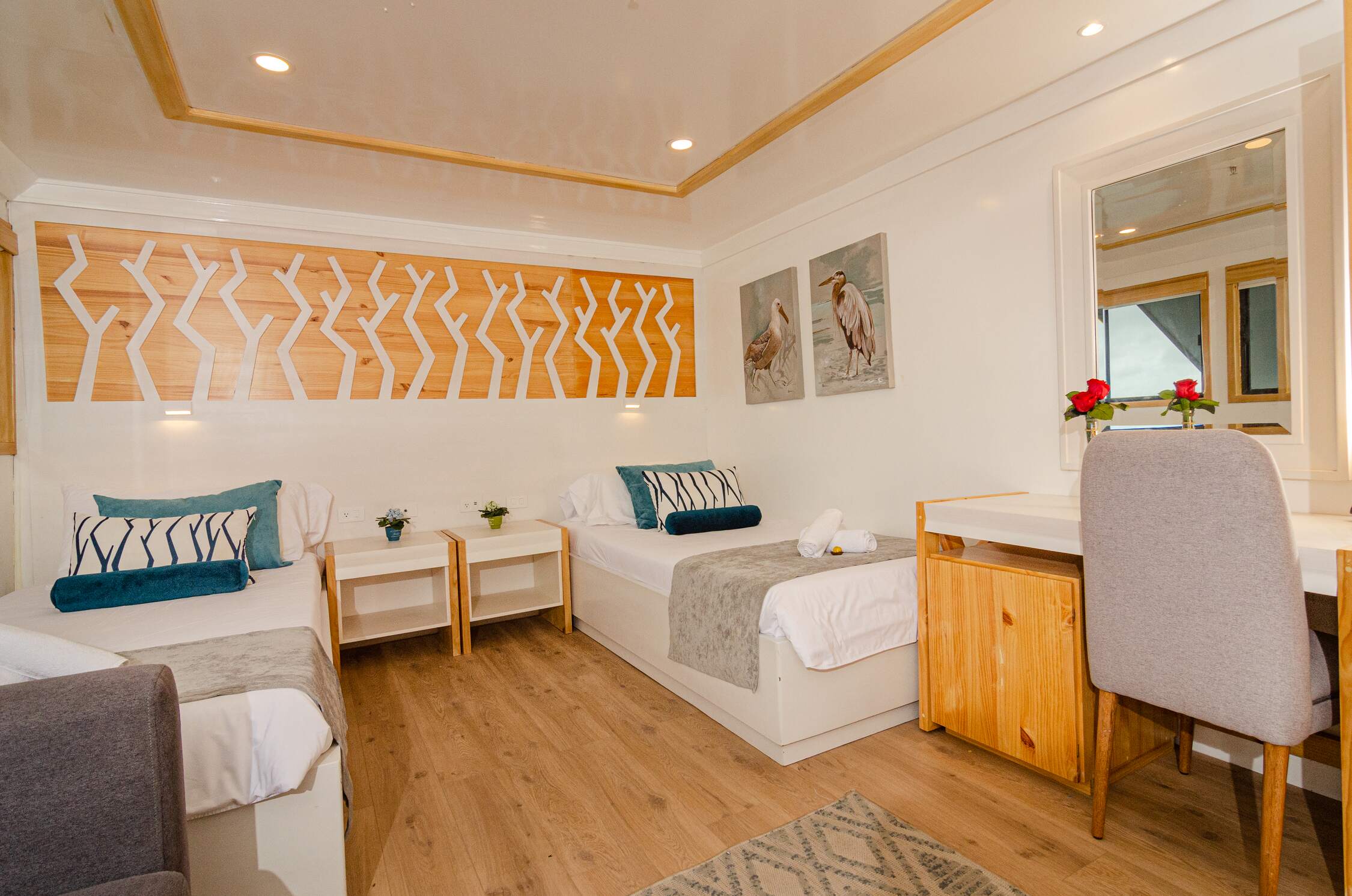 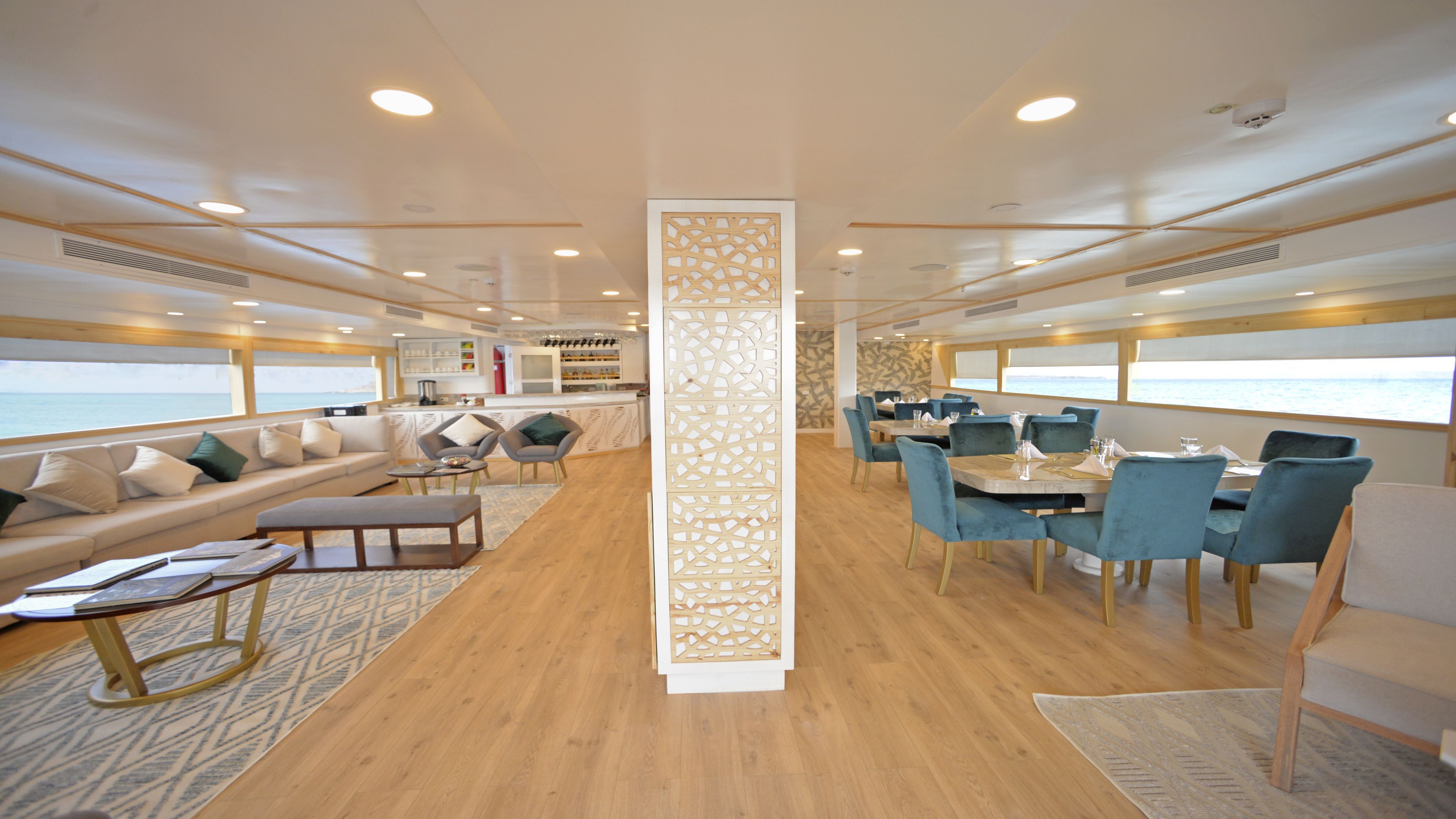 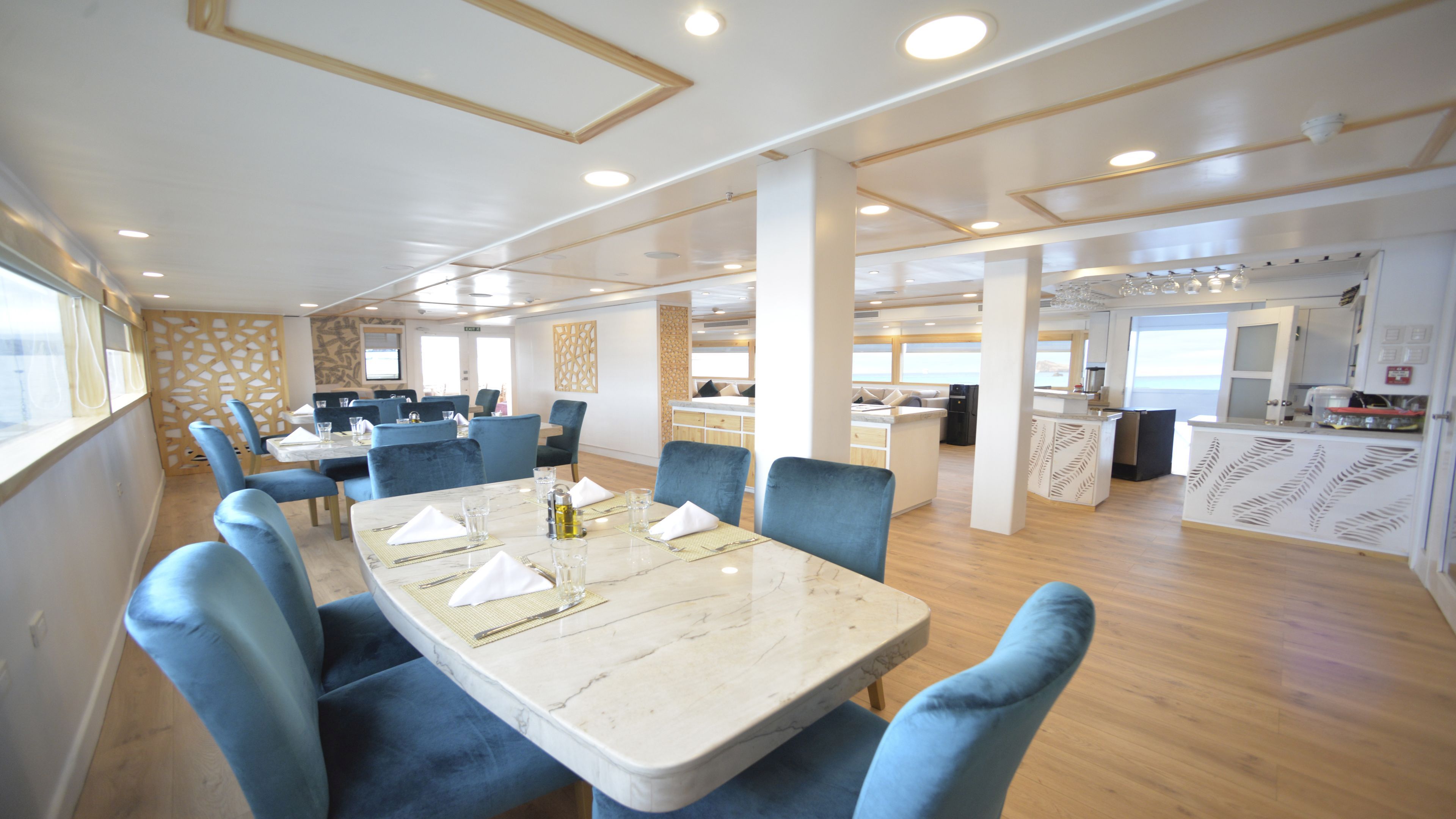 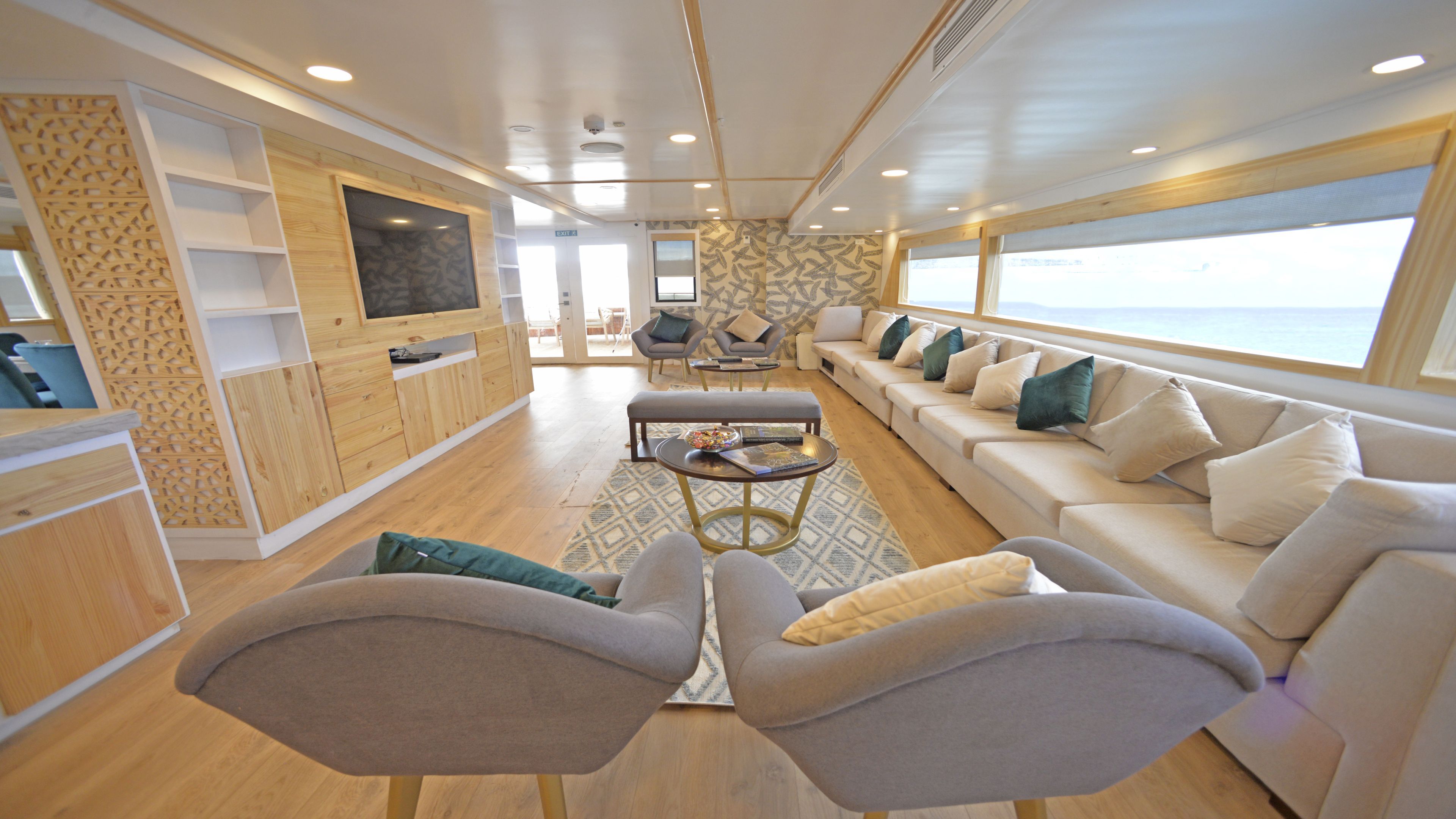 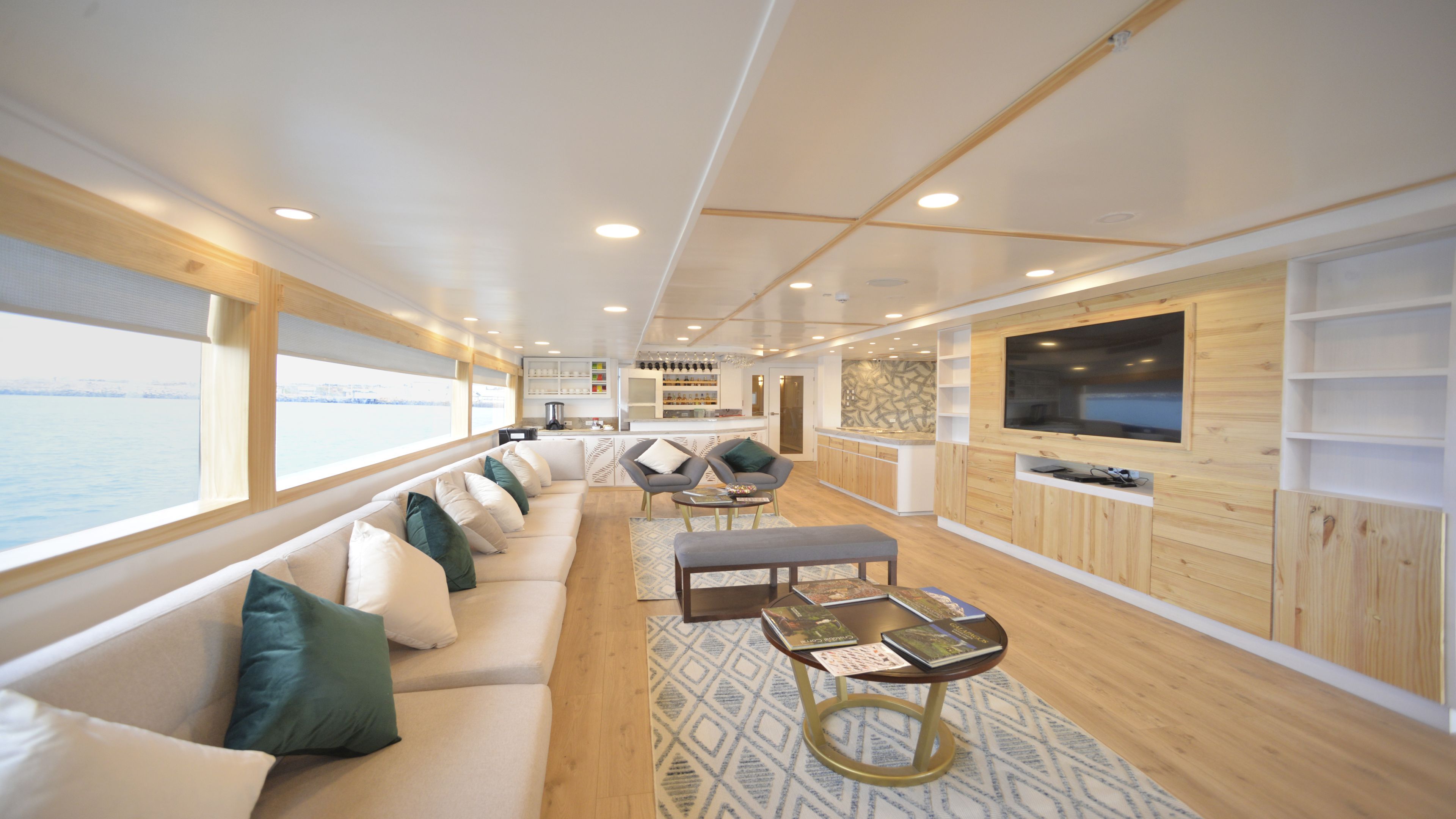 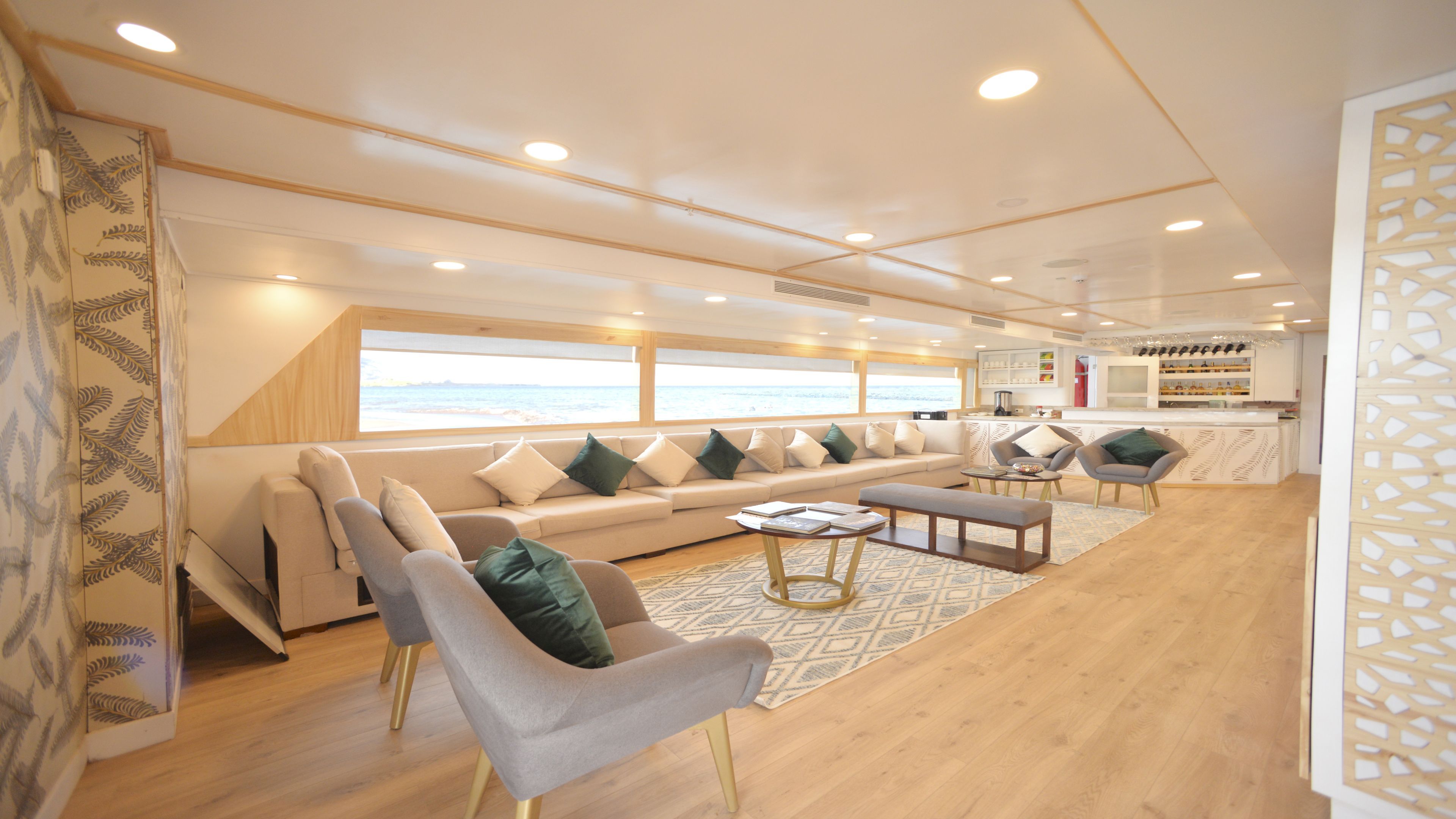 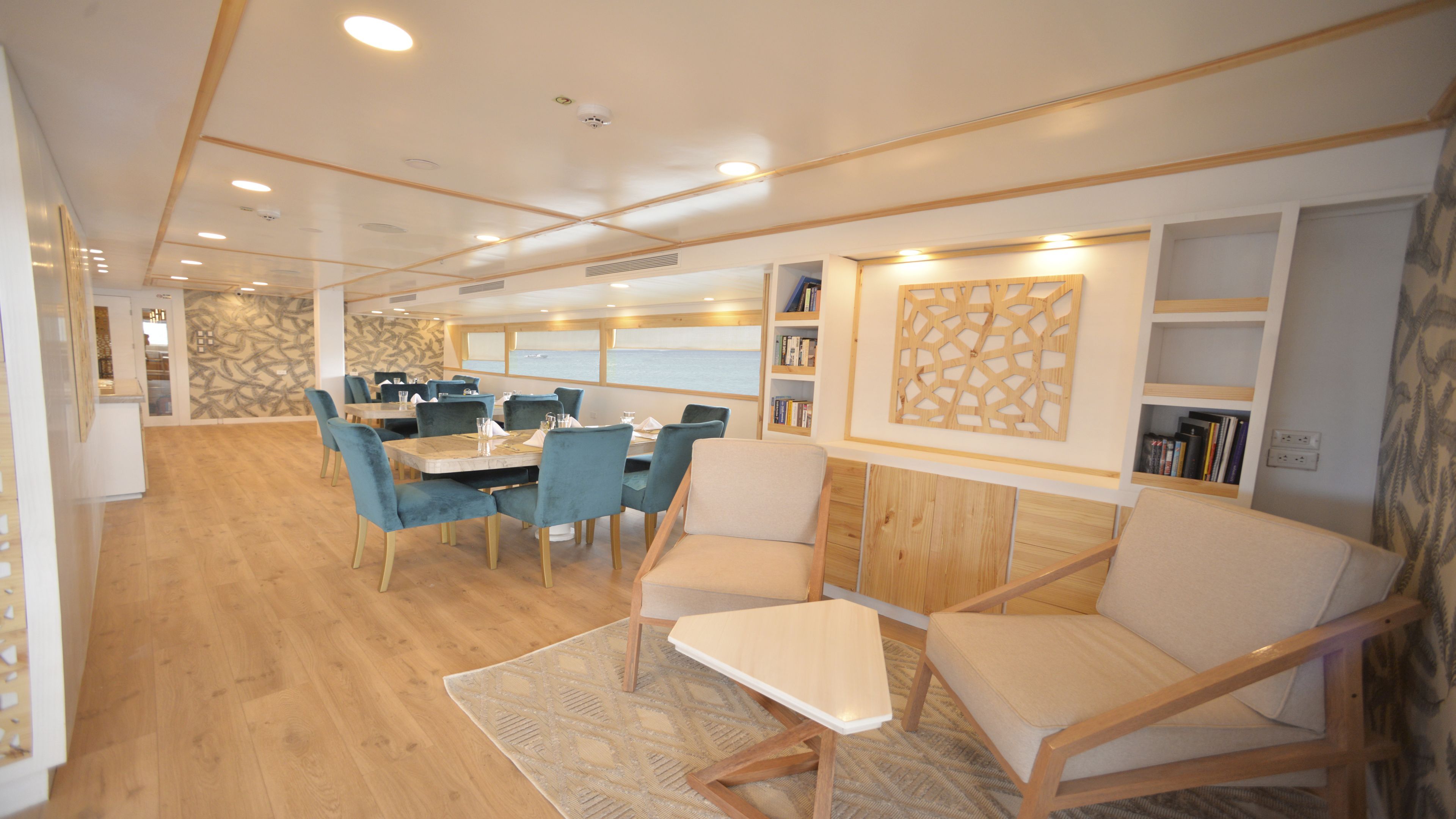 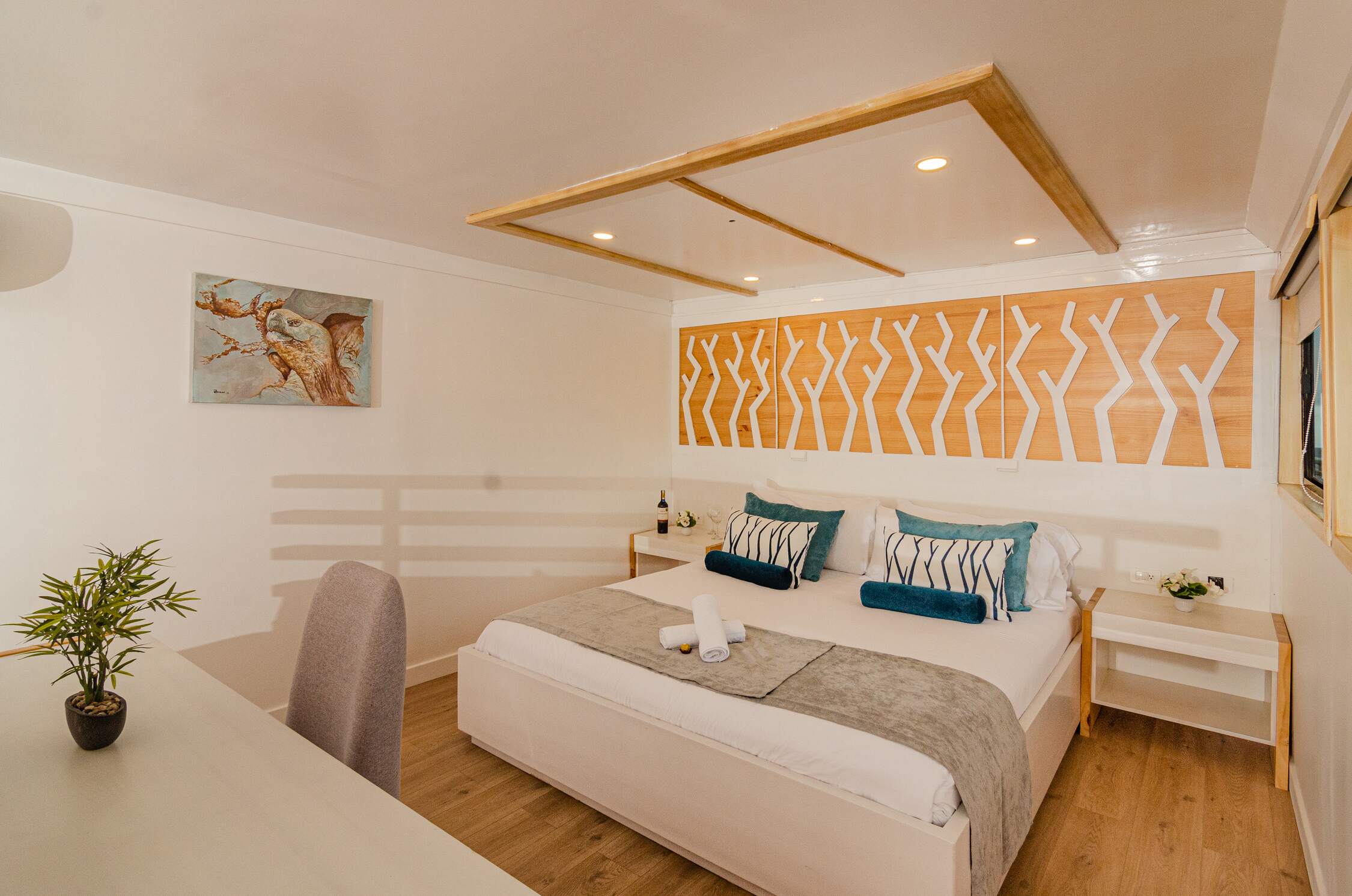 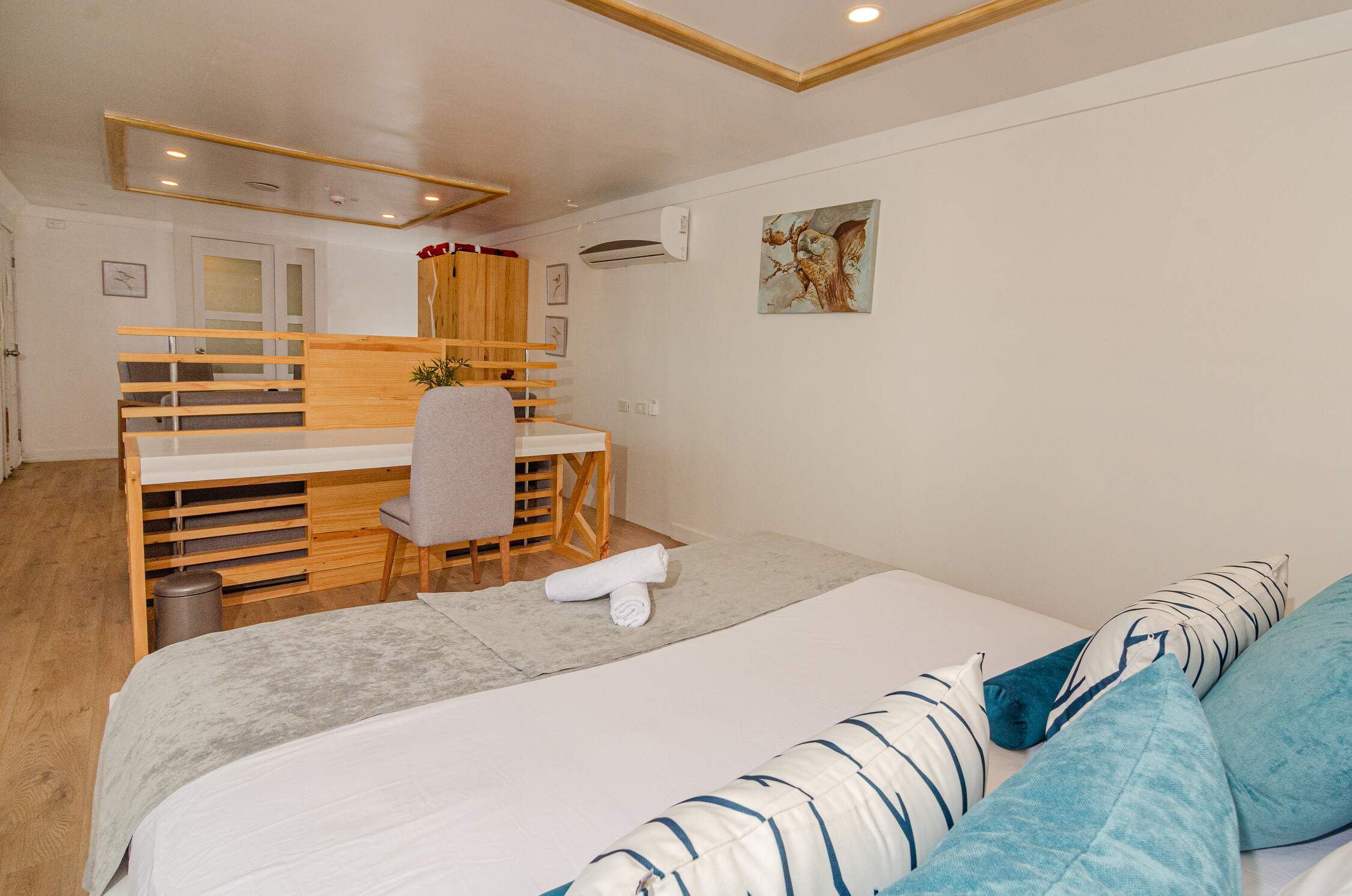 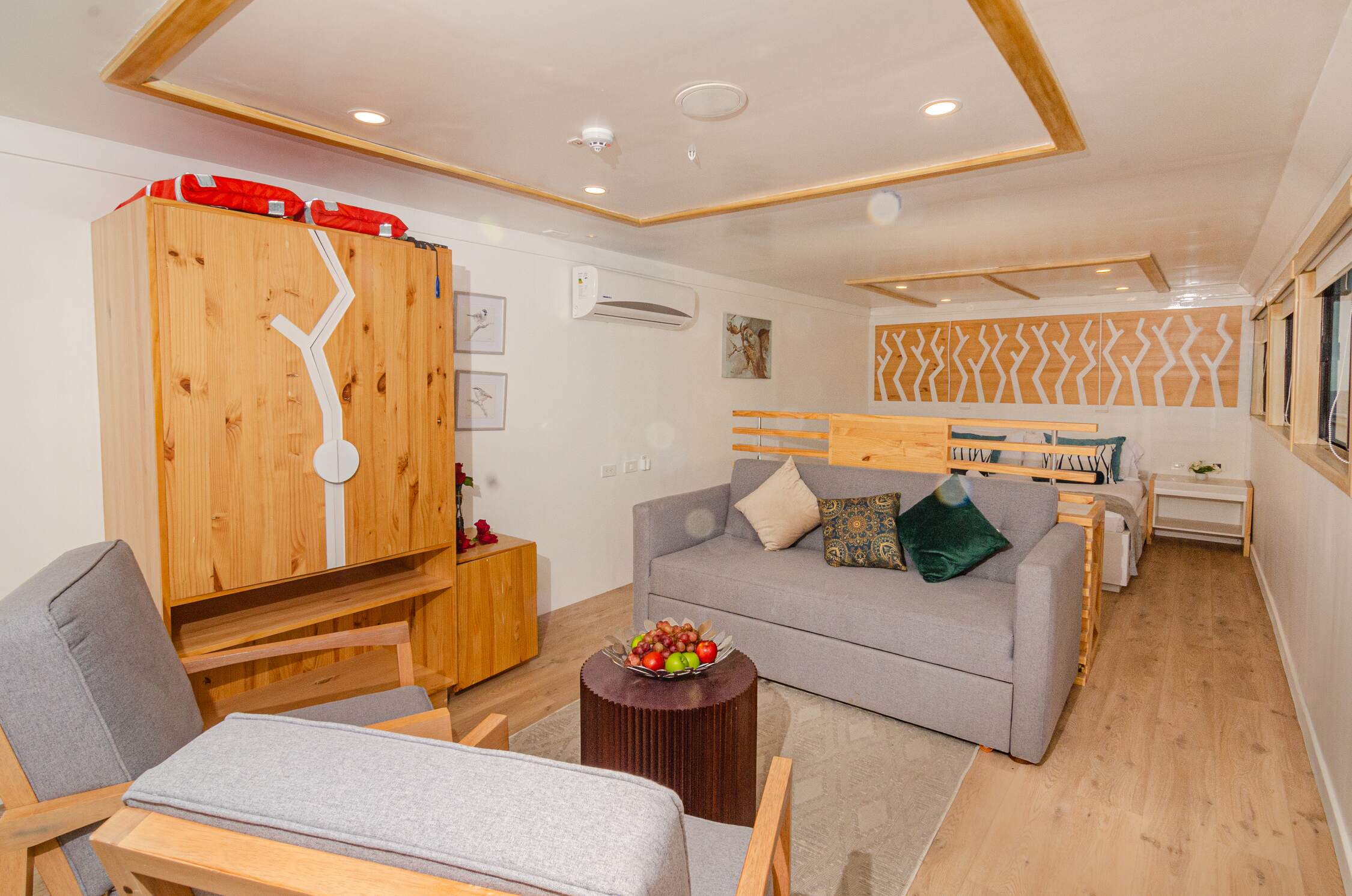 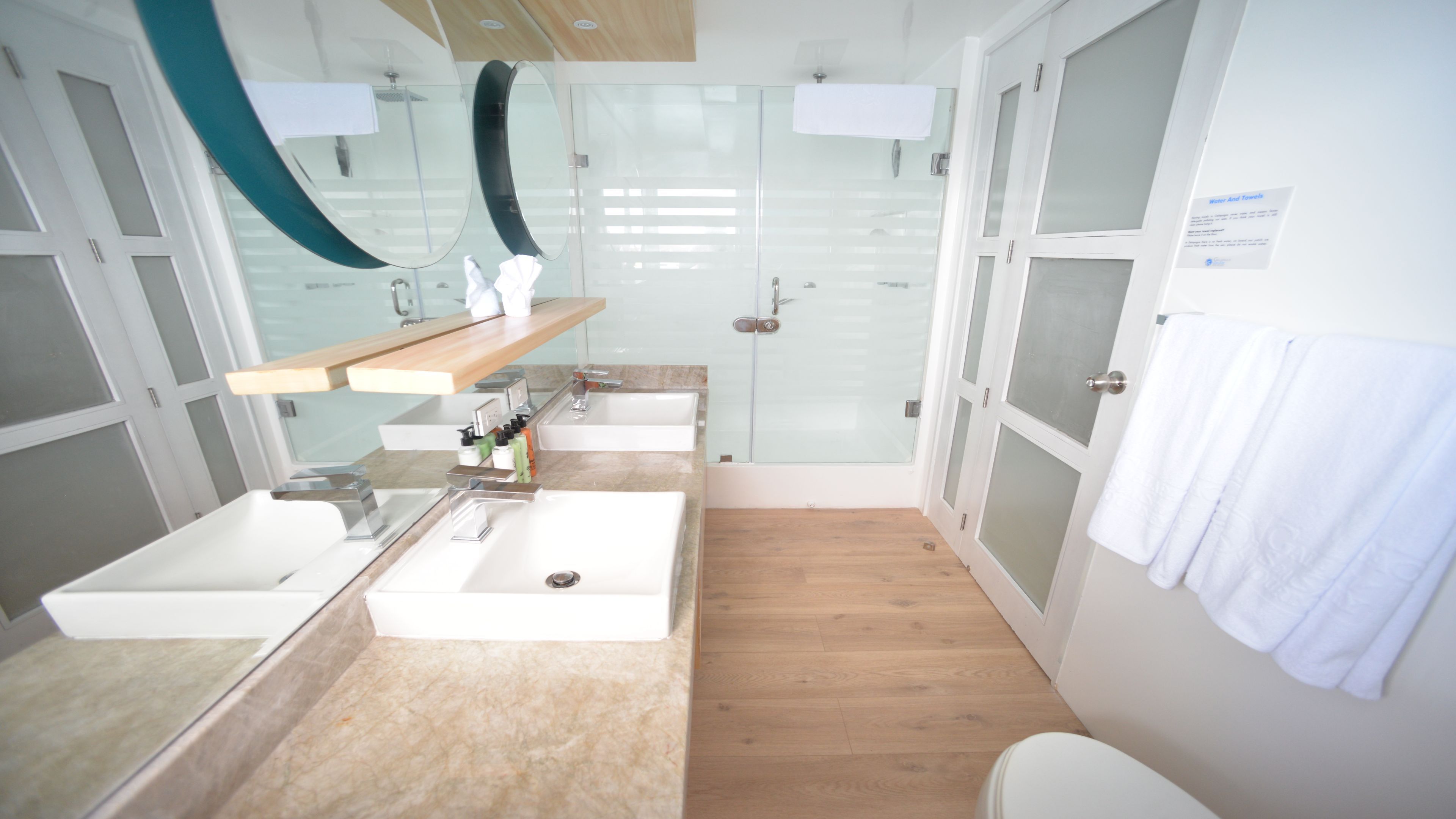 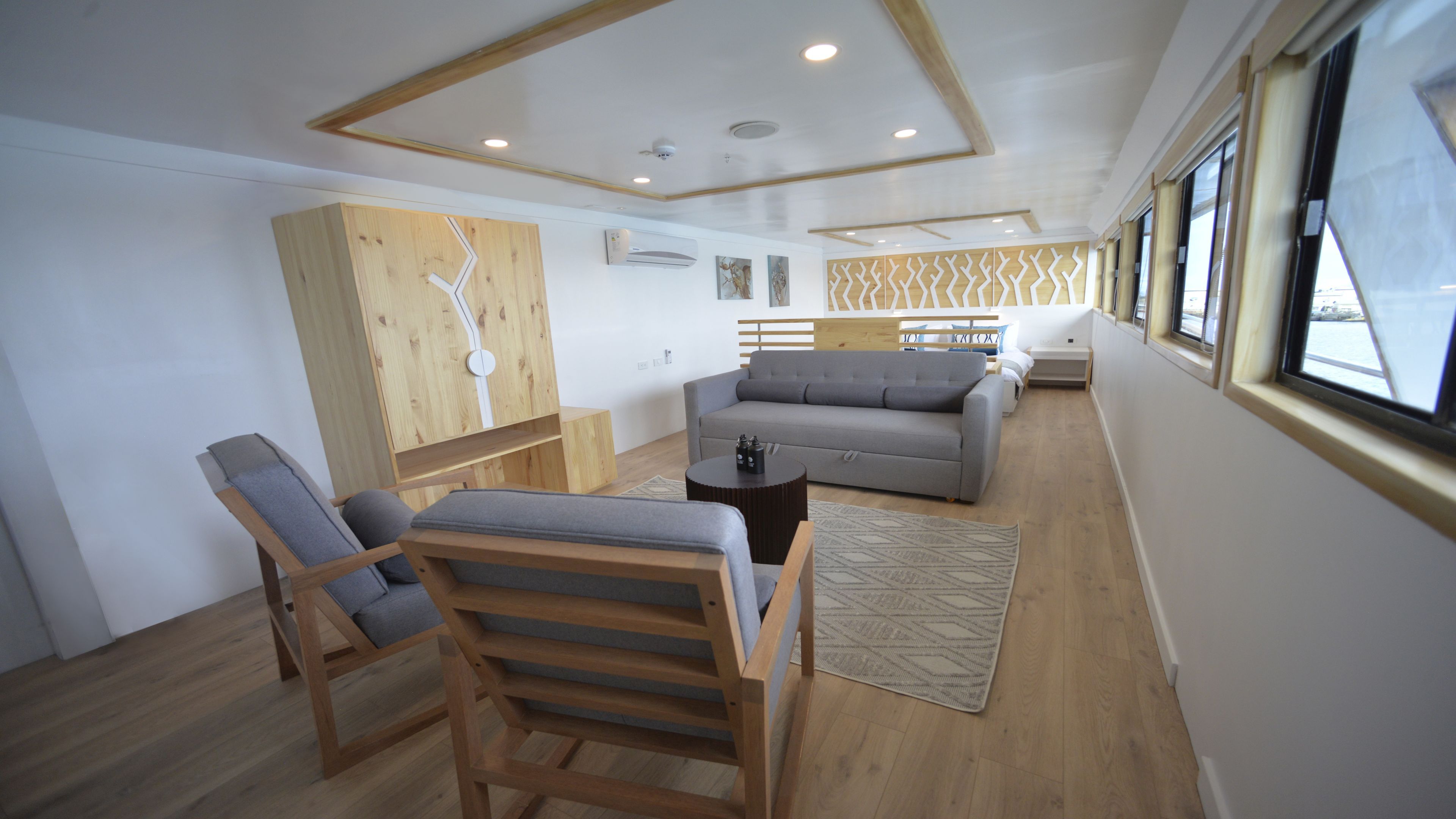 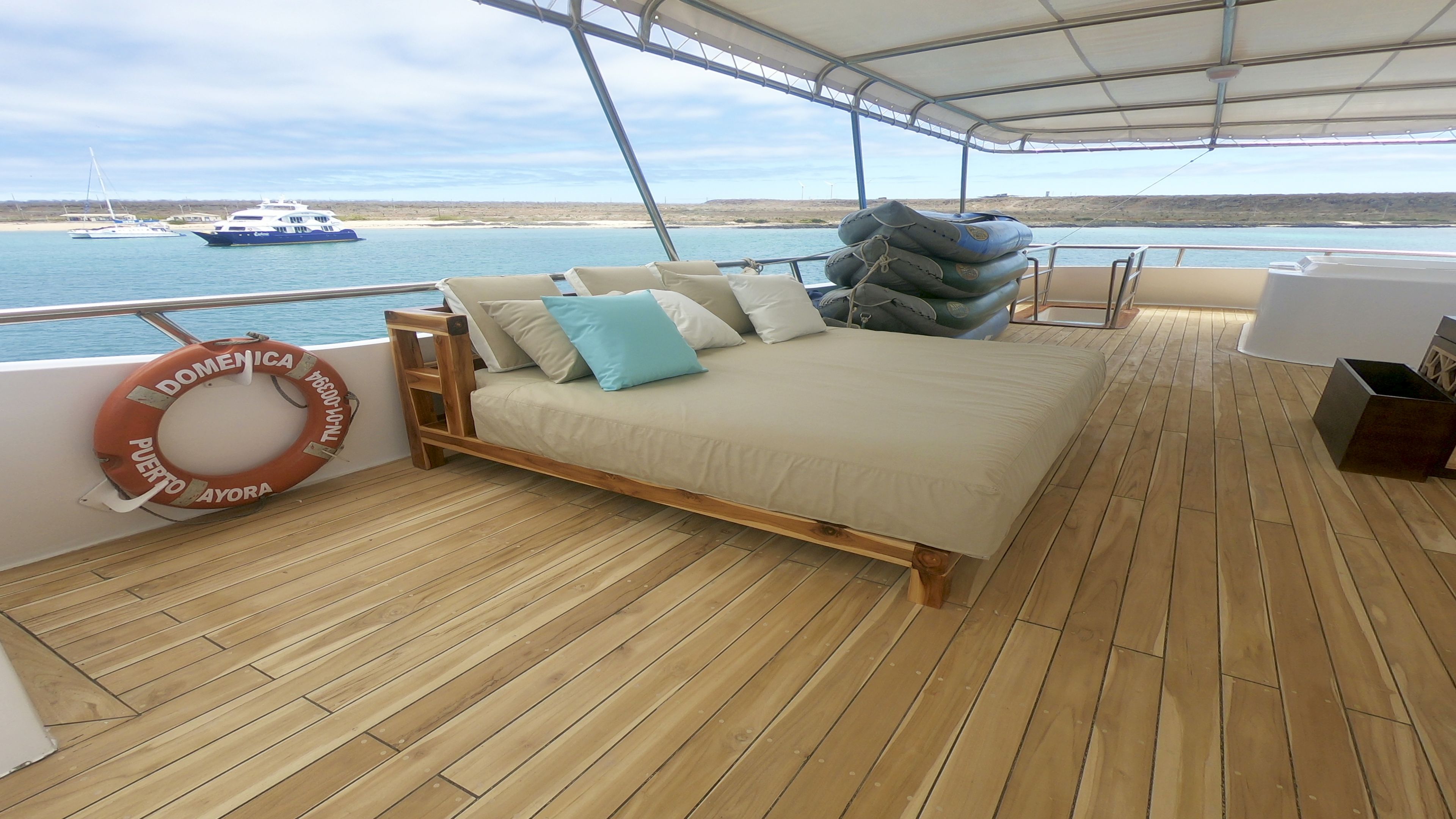 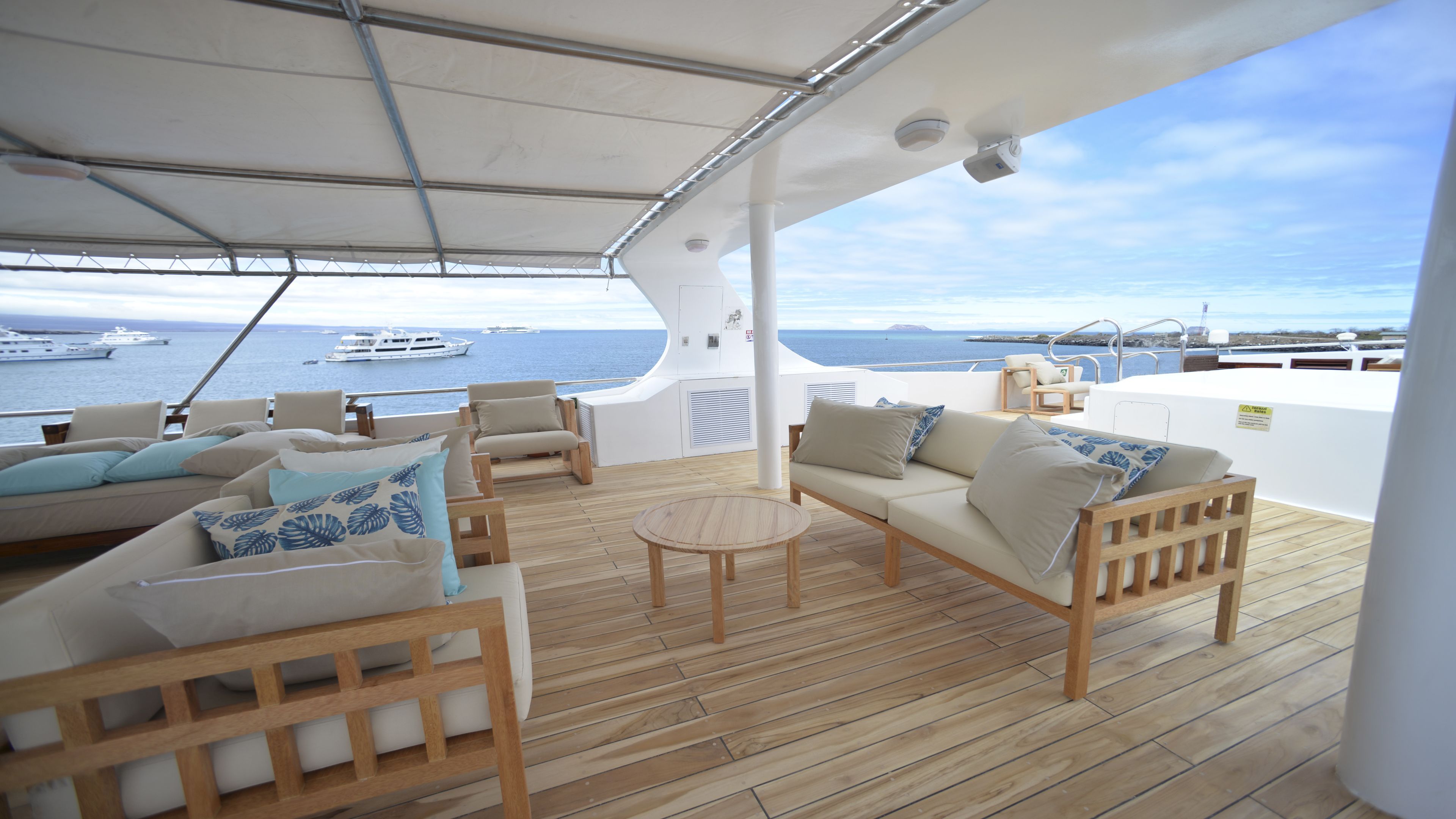 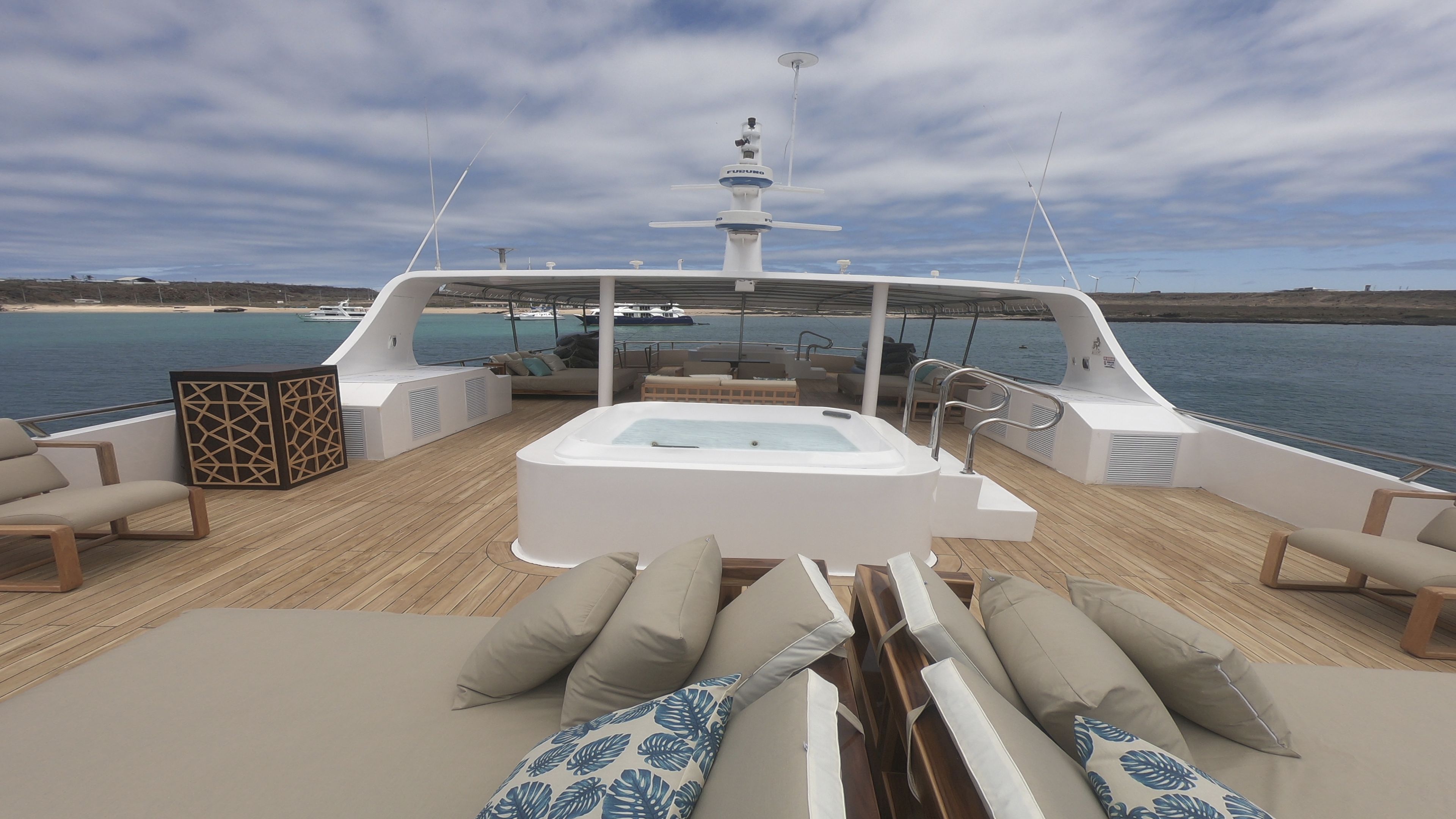 Sea Star journey b itinerary -galapagos islands cruises ecuadorSea Star journey “B” itinerary: Upon arrival at Baltra Airport, travelers pass through an airport inspection point to insure that no foreign plants or animals are introduced to the islands, as well as to pay the park entrance fee of $100 (unless it has been prepaid). A guide will meet you, help you collect your luggage, and escort you on a short bus ride to the harbor and then on board M/Y Galapagos Sea Star Journey

The visitor site at Dragon Hill has been open for visits on 1993. This site is located in northwestern Santa Cruz Island and consists of a trail that lead to a hyper-saline lagoon behind the beach, frequented by flamingos, pintail ducks and other species of birds. This site has been re populated with land iguanas from Seymour, Isabela and Santa Cruz islands. There is a short walk to the Hill, which offers a beautiful view of the bay.

This little cove is located at the northern side of Santa Cruz island, this is a red mangrove lagoon very calm and quiet which made an ideal place as nursery for many sharks and rays. Its crystal waters permits to observe large groups of white-tip reef, black tipped reef and hammer heads sharks, schools of golden rays and spotted eagle rays.  There are no landing sites so the visit is done by panga or kayak. Sea turtles are frequently seen and sometimes they are seen mating in the mangrove-lined waters. Pelicans and Herons are
also seen in this area.

This is a small islet (1 sq km) located just off the southeastern tip of Santiago Island. It is a recent volcanic cone, shaped like a Chinese hat when seen from north side. On the west it can be seen lava formations, formed under the sea and raised upward, this is why coral heads are found on the lava. This is an excellent visit for interpretation of geological features such as lava tubes and lava flows. The landscape is covered by sea lions colonies, marine iguanas and Galapagos penguins.

This bay has origin when the crater of this island collapsed below sea level. The wet landing is on a beautiful white coral sandy beach. This is a favorite island for birdwatchers: red footed-booby, masked boobies, wandering tattlers, lava gulls, whimbrels Yellow-crowned, black-crowned and lava herons, with and yellow warblers can be seen in the area.
Continuing on the trail, visitors climb gradually to the edge of the cliff seeing Red-Foots nesting in the Mangrove trees below. Bird watching includes sightings of Sharp-Beaked Finches, Large Cactus and Ground Finches, Galapagos Doves and Swallow-Tailed Gulls. Reaching the end the trail at the cliff’s
edge offers an incredible view of the island and the many birds living there.

El Barranco is located in the southern part of Darwin Bay and it is also known as Prince Philip’s Steps, passengers will climb to a plateau that is part of the stretch of land that surrounds Darwin Bay on its eastern side. There is a big population of Masked boobies and Red-Footed boobies in the tree; Storm petrels and Short-eared Owls have found in Genovesa lava flows the ideal place for nesting.

Bartolomé Island is situated across Sullivan Bay. It has an altitude of 114 meters, from where we can observe one of the most beautiful sceneries of the Galapagos Islands such as: Volcanic cones, lunar-like craters, lava fields, and the famous Toba formed pinnacle eroded by the sea. There is very little vegetation on this island.

It has two breathtaking beaches where marine turtles exist and at the base of the pinnacle, as well as a very small colony
of Galapagos penguins.

Santiago, also called James, or San Salvador Island, is located in the west central part of the Galapagos archipelago. It is the fourth largest island in the archipelago (following Isabela, Fernandina and Santa Cruz). Along with some of the large western volcanoes of Isabela and Fernandina, Santiago is also volcanically active, with many young flows and cones to be seen, particularly along the south, west, and east coasts. These may even be seen from the summit of Darwin Volcano and from space. A number of historic eruptions have been reported over the last 2 centuries. Santiago actually consists of two coalesced volcanoes: a typical shield volcano on the northwest end and a low, linear fissure volcano on the southeast end.

The trail to the highlands leaves from Bellavista and passes through the agricultural zone, near the National Park boundary, the Miconia Zone, and then goes to the Fern and Sedge zone. With clear weather (unpredictable) this area affords beautiful scenes of rolling hills and extinct volcanic cones covered with grass and lush greenery all year round.

Then transfer back to Baltra for embarkation on flight back home.