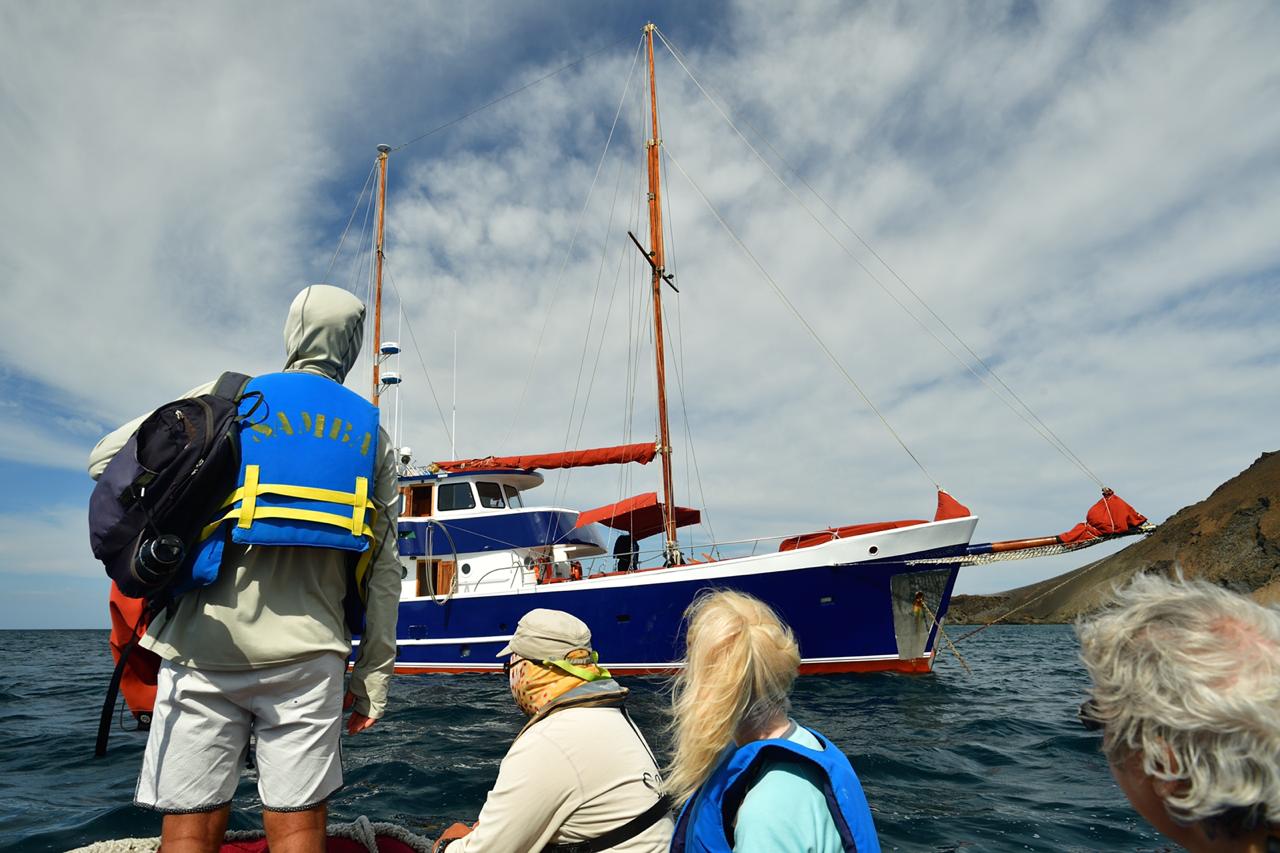 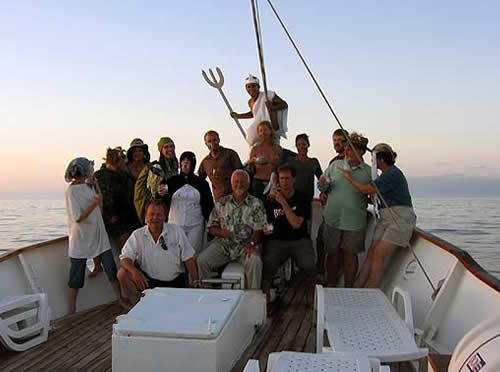 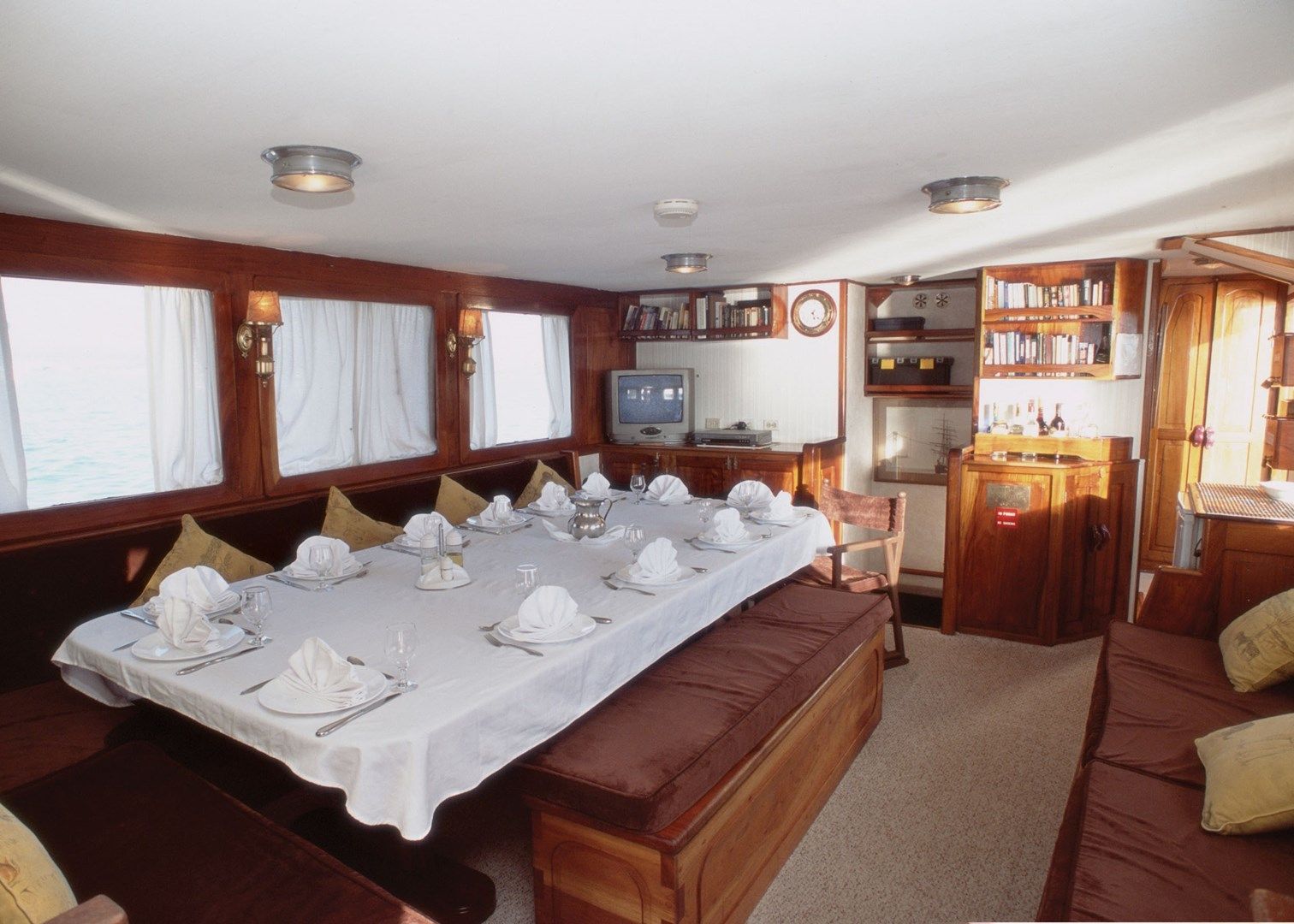 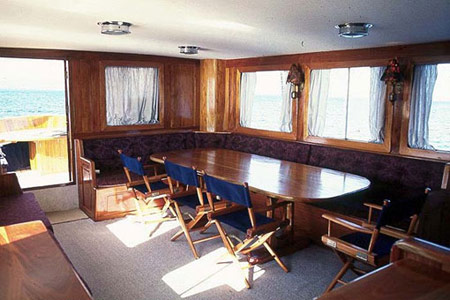 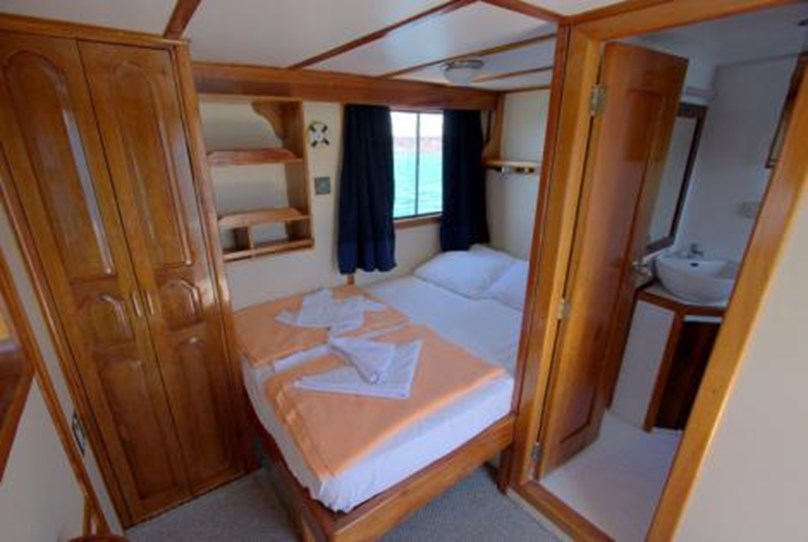 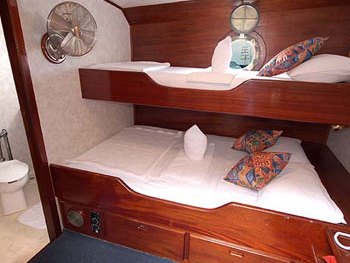 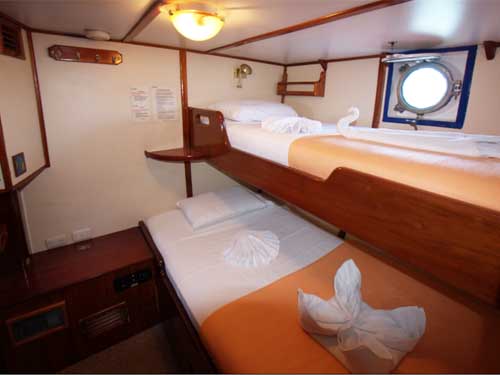 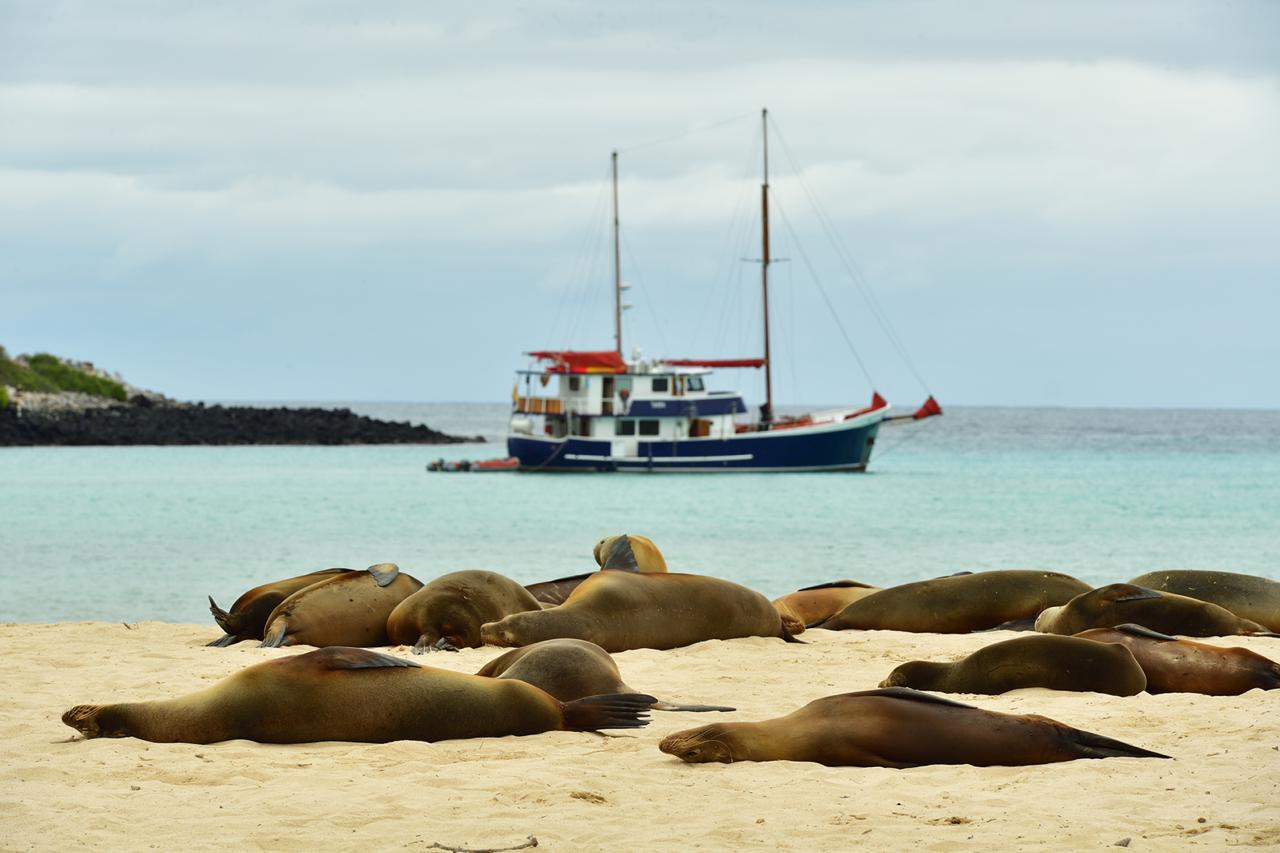 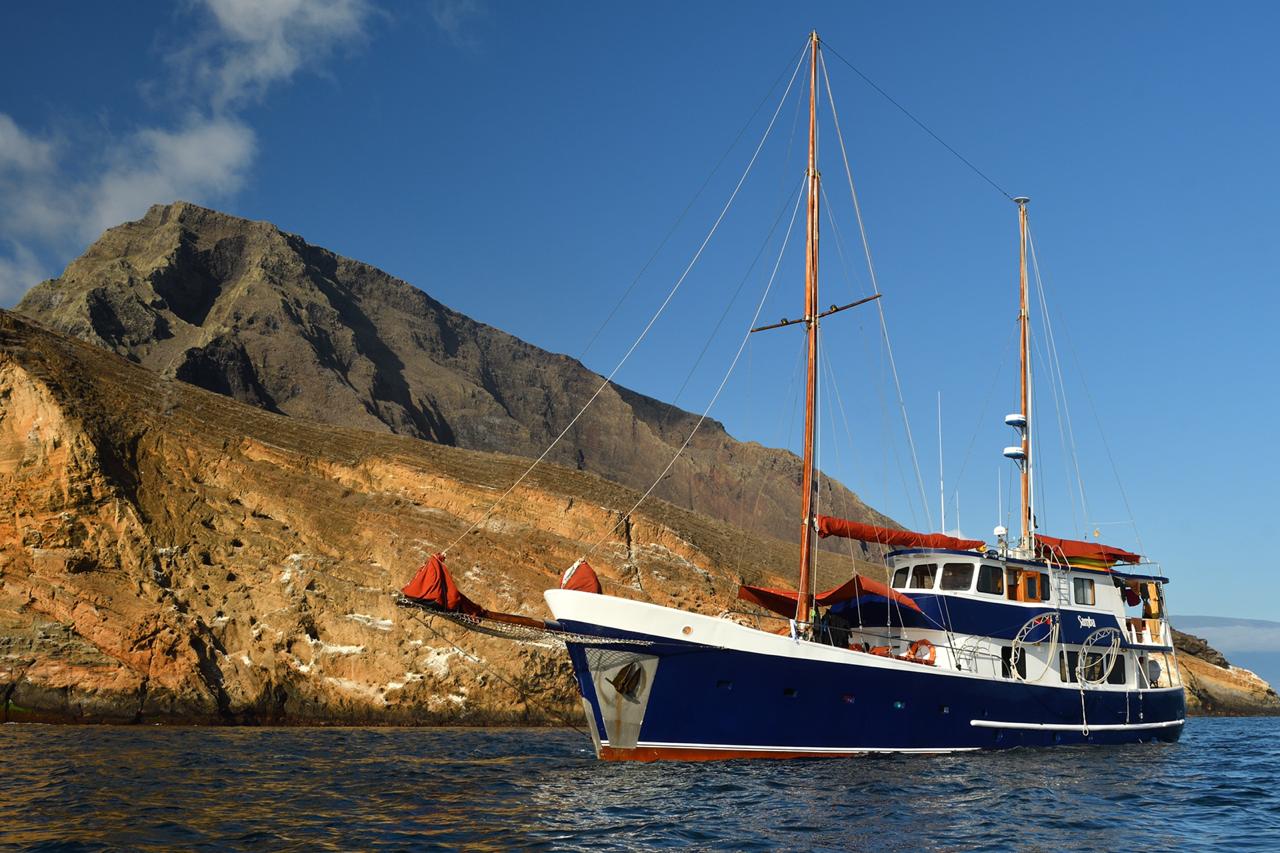 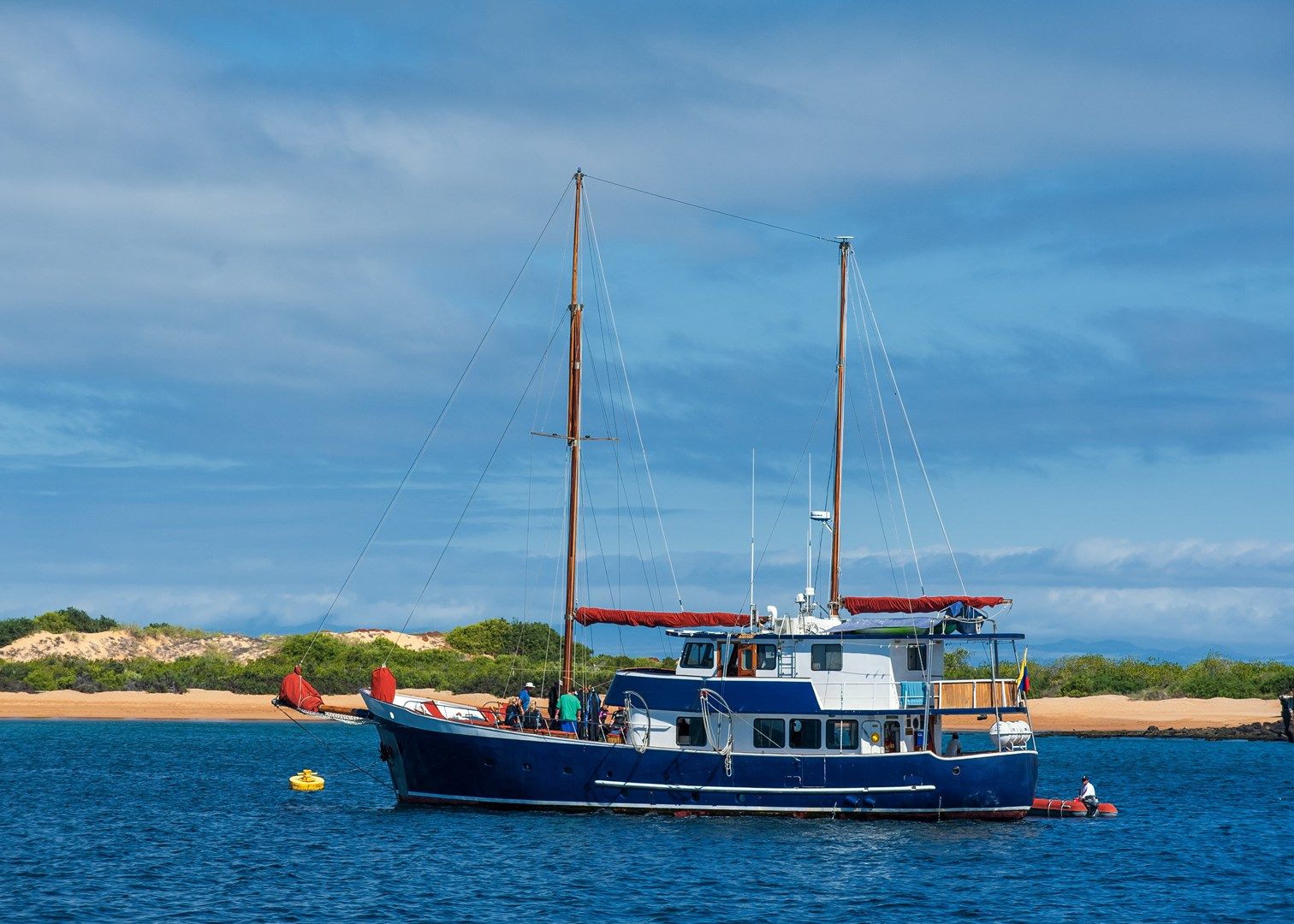 On arrival at Baltra Airport all visitors pay their entrance fee to the Galapagos National Park and get their hand luggage checked by the Quarantine system. You will then be met by the Samba’s naturalist guide, who will assist you with your luggage collection and accompany on a short bus ride to the harbor to board Samba.

After a light lunch the Samba will navigate for 45 minutes to Mosquera. Imagine a beach rising from the ocean floor in the middle of nowhere. Imagine sand grains as soft as sugar. Now imagine a sea lion colony and a fabulous sunset. You are here! Mosquera Islet is by far the best beginning of a Galápagos journey. This volcanic uplift that dates from 100 thousand years ago, a geological treasure for an admirable start. On the shore is easy to encounter Galápagos sea lions, sally light foot crabs and shore birds. Visitors are welcome to swim or snorkel from the beach.

After 6 to 7 hours of navigation from Santa Cruz you will wake up to the beautiful cacophony of one of the largest tropical sea bird colony of the planet. The cliff tops are decorated with frigate birds, red-footed boobies, Nazca boobies, swallow tailed gulls, tropic birds and many other pelagic animals. Darwin Bay is the home of many nesting sea birds. Following a wet landing and with the early morning light you will blend in with the red-footed boobies displaying for potential mates as they collect nesting material. The great frigate birds inflate their gulag sacks hoping to attract a female while others play their favorite game: piracy. Darwin’s finches, Galapagos doves and mocking birds stroll the ground to find seeds and insects. The red mangroves, cactus and saltbushes contrast with the blue sky and the dark basaltic walls.

Following lunch you will do a dry landing to climb Prince Philip’s Steps. The steep ascend takes you 100 feet above sea level, to be welcomed by the elegant silhouette of red billed tropic bird and the aerobatic Galapagos shearwater, both interact with the precipice on fast approaches. The lava rock trail takes through the endemic dwarf incense tree forest, to find more red footed “lancers” nesting and many of their gannet like relatives, the Nazcas, loudly claiming the floor as their residence. The Palo Santo forest is dormant most of the year, to awaken in the rainy season and contaminate the air with a refreshing aroma. As you exit the latent trees your breath may cease by the panorama of thousands of storm petrels flying erratically beyond the lava flows. This is the perfect scenario for the island predator to make a successful kill. The short-eared owl, known elsewhere around the world as a nocturnal predator, in Genovesa hunts in bright daylight. More cat than owl, waits patiently outside lava tunnels and crevasses to capture the stormy petrels as they leave their houses after feeding their young.

Snorkeling on Tower offers a view of a wide variety of tropical fish.

All boats will travel back south after sailing to Tower; the Samba is the only one heading west-northwest. The Galapagos National Park Service granted us the chance of using Marchena’s magical shorelines to snorkel, dinghy ride and kayak. The forbidding endless and untouched lava flows where only science has reached land, no fresh water and very little precious soil, Bindloe’s serenity scenario is only awaken by the murmur and surge of the Pacific swells and musical argument of the castaway sea lions. Punta Mejía is one of the best sites in the Archipelago to snorkel. The calm and clear deep blue water of the north west coast, and the dark hostile topography of the location give the sensation of witnessing the beginning of our planet and its underwater world.  Apart from great fish diversity, when we snorkel we often see rays, reef sharks and sea turtles.

Navigating southwest for 45 minutes to Playa Negra is always an exciting experience. More than once in the past we have seen bottle nosed dolphins, other cetaceans or feeding frenzies. After an early afternoon snorkel around recently formed lava grotto were marine iguanas feed, we will start a 5 to 6 hour sail to the west. As we get further away from the island the sea floor changes dramatically and we enter deep water, an oceanic drop-off. The Cromwell current, which arrives from the west from the very profound waters, brings richness to the surface and generates an superlative upwelling. As a result, there are positive effects throughout the marine food chain and we have a good record of cetaceans and other ocean wonderers on this navigation. Whales or dolphins are never a guarantee, but we will we do our best to find them.

Human history has left its footprint on this small corner of the Galapagos. Punta Albemarle, the farthest north point of Isabela, was one important US radar station to prevent any Japanesse attempt of destroying the Panama Channel. A small and deteriorated building is the reminder of the boredom and routine that rusted the mind of the juvenile navy officers. The soldiers were in charge of the three-week shifts where they never saw any action. Nevertheless, the wild life gives the best example of constant struggle for survival, a fight were only the fittest continue. The recent lava flows are the nesting ground of the only flightless cormorant in the world and the basking terrain of the largest marine iguanas of Galapagos. Because not many boats visit this site the cormorants, that are very shy birds, display as they built their bulky nest we seaweed with total indifference to human presence. As the morning advances the iguanas give a show of adaptation as they wonder in to shoreline to feed on green and red algae. With this fantastic setting you can only be reminded that the only constant of the Islands is change.

Punta Vicente Roca offers an overwhelming diversity of geological formations. Located on the southwest end of Ecuador Volcano only a few miles south of latitude 0°, the area is an outstanding example on how the Islands were formed and how the forces of change have transformed the landscape and shaped the wildlife. Vicente Roca is the home of tuff cones and lava dikes and is fertile ground for erosion and the disaster of collapse. We will look at the dramatic structures from our dinghies, as we also enjoy watching the Galapagos penguins, brown noddies, blue-footed boobies and other marine life. When the waters are calm enough the snorkel is fascinating. The walls of the tuff cones are full of colorful invertebrates and rich algae blooming give us a great chance of watching numerous sea turtles feeding.

Only 30,000-100,000 years old Fernandina is the youngest island of the Archipelago. This immature shield volcano is less than an instant in the geological time scale. Not even your wildest imagination can give you a better setting to experience the start of life on an island. The whole Island is cover with hostile worthless lava. However, at Punta Espinoza the shoreline is teeming with life. Reptiles, birds and mammals all coexisting, singing and sexing. It is a living museum with piles of marine iguanas, playful sea lions, hard working flightless cormorants, dwarf penguins, busy Sally light-foot crabs and much more. Don’t forget to look around because Galapagos Hawk is always on the hunt. The site is a true cradle of evolution. Snorkeling with turtles, iguanas, cormorants and plenty of fish is the best way to refresh after the lava walk.

The hotspot under the Galapagos generates intense volcanic activity. The west islands are the youngest and most active of the Archipelago. Located in the center of Isabela, Alcedo Volcano is remainder of how volatile this Islands are. On the west shore line of Alcedo lays Urbina Bay. The landmass of the inlet was uplifted in 1954. More than ¾ of a mile of shoreline were created, and many coral reef extensions where exposed to air as the upheaval rose the seabed. The brand new land became a perfect nesting terrain of the most beautiful land dragon. The land iguanas of Isabela are the largest in the Galapagos and in Urbina the colorful population offers a great example of their growing potential. The impressive yellow, orange/brown iguanas roam the low lands looking for flowers, fruits, leafs an shoots of their favorite plants. Also, when the rains arrive is possible to see giant tortoises sharing the land with the other primitive looking reptile. Urbina is miniature reminder of a Jurassic time.

Isabela Island constitutes almost half of the entire surface of the Archipelago. It is nearly 100 miles long and offers a remarkable diversity of habitats. Shaped like a seahorse and with volcanoes over 5000 feet of altitude, it is also the place of birth of vast mangrove extensions. Elizabeth Bay is the only place of the Earth where old tropical mangrove forests and penguins can be conjugated on the same sentence. The ecosystem is also the residence of spotted eagle rays, sea turtles and a nursery for fish and marine invertebrates. With the outboards off and using only our oars for speed, we will enjoy this serene array of life.

When you land on Punta Moreno you understand why the Spanish Bishop that discover the Islands said: “It was as if God had decided to rain stones”. When he first set foot on a lava field he struggled to find fresh water and in desperation was reduced to chew on cactus pats to quench its thirst. More than three centuries later a young Naturalist saw beyond the lava. Charles Darwin was amazed by the colonization of plants and the start of life over this terrain. He thought this process could easily compare to the origin of life in our planet. The mystery of mysteries… The pioneer cactus growing over the country of lava is contrasted with stunning oasis. Where lava tunnel roofs have collapse, brackish water accumulates o give life to greater flamingoes, moorhens, black-necked stilts and Galapagos Martins.

After breakfast we land on Puerto Velasco Ibarra to ride on a ¨chiva¨(endemic transportation) to visit the highlands of Floreana. On the way to the humid zone we stop to climb Cerro Alieri. A good number of steps will take us to a breathtaking view. A fantastic landscape decorated with liquens and epiphytes. The mysteries of this Island are hidden in the pirates cave. At Asilo de Paz we will engage with the fascinating story of the Wittmers, Doctor Ritter and Dora, and the famous Baroness and her three lovers. Charles, Floreana and Santa María are the official names of the Island that holds an overwellminly rich human history.

In the afternoon we land to visit la lobería (sea lion roockery) and swim or snorkel of the beach. It is a refreshing end to a wonderful day.

If you are not joining us for 15 days, before you go to the airport you will stop at the Highlands of Santa Cruz. At 1800 feet the greenery offers the opportunity to admire the remnant of a Galapagos mature forest. The Daisy trees of the genus Scalesia decorate a couple of extraordinary geological formations. Known as “Los Gemelos”, this collapse craters and its surroundings are the home of many Darwin’s finches, mocking birds, vermillion flycatcher and a wonderful diversity of indigenous plants. It is important to leave the boat early in the morning to have a pleasant visit. Breakfast will be served at 6:00 am.

Departing visitors going to Baltra Airport and those who are staying on the Samba for a second week will all go together in a bus to Los Gemelos. Departing guests visit the craters and clients staying on board will have a full morning around the Highlands to see lava tubes and giant tortoises in their natural habitat. If you are remain on board have lunch on the Samba. A transfer guide will meet all arriving guests from Baltra Airport.