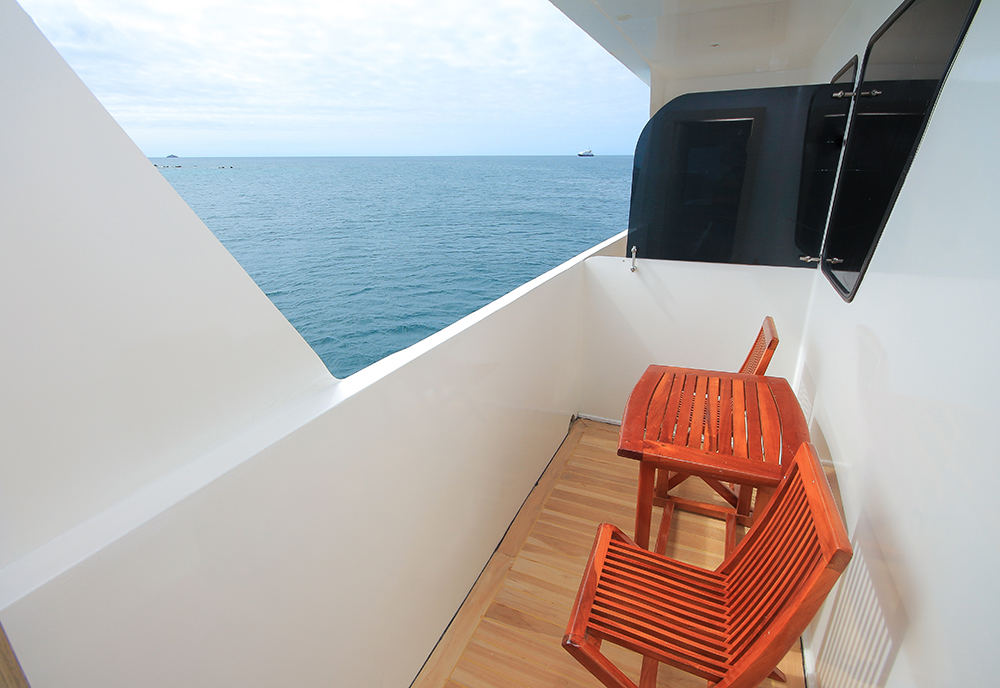 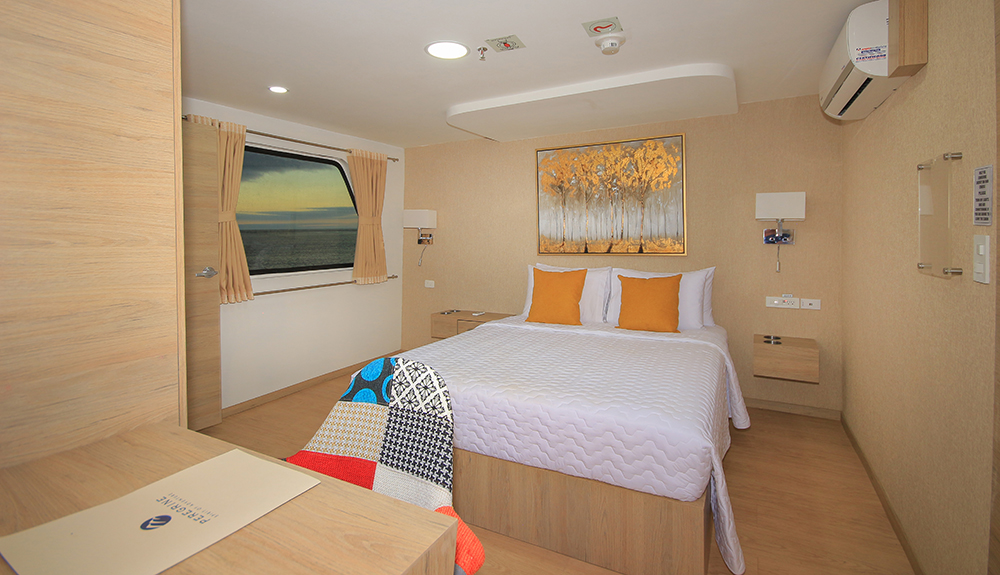 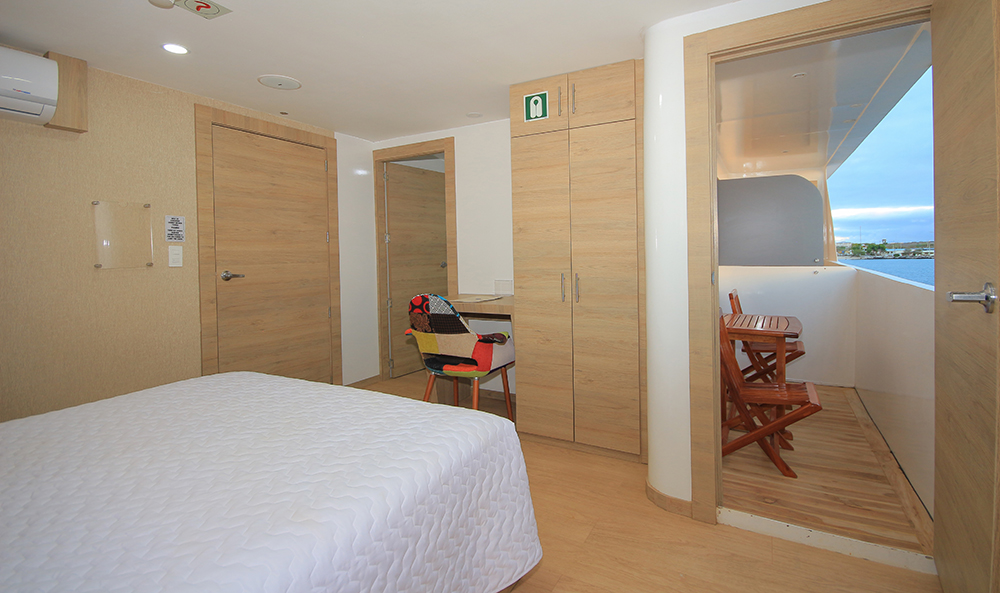 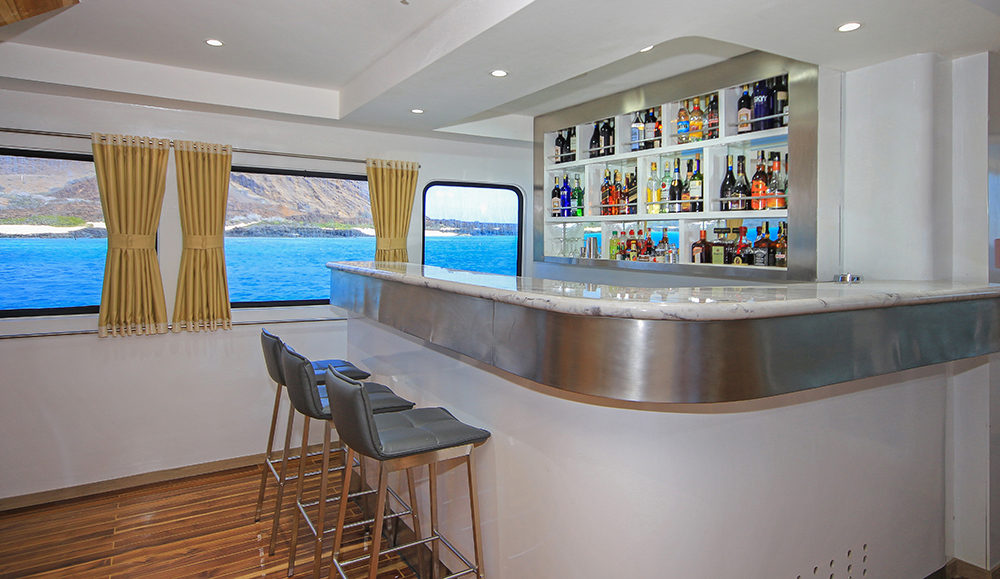 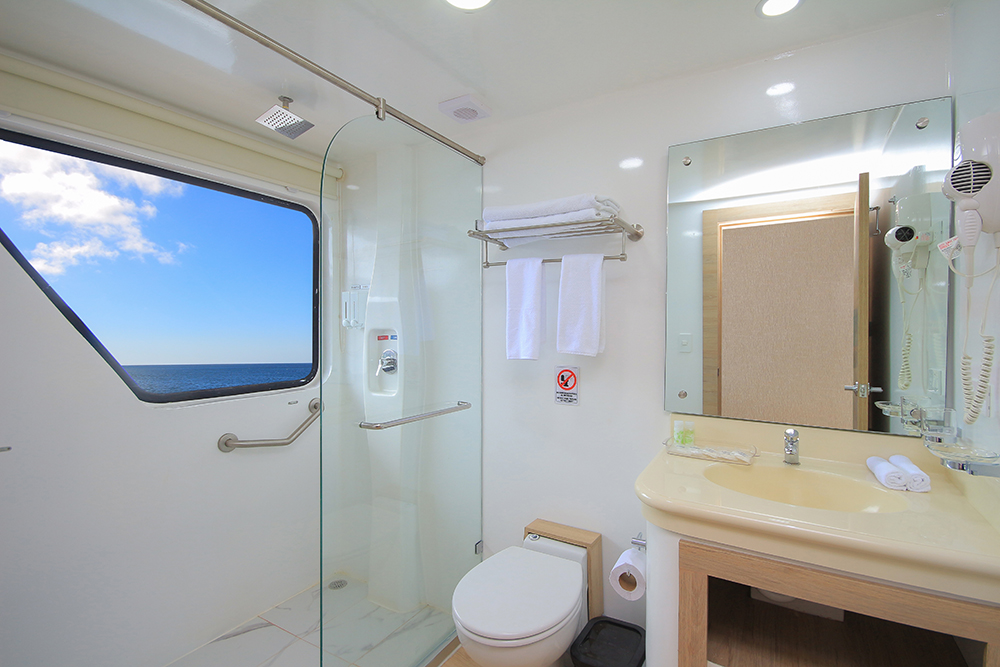 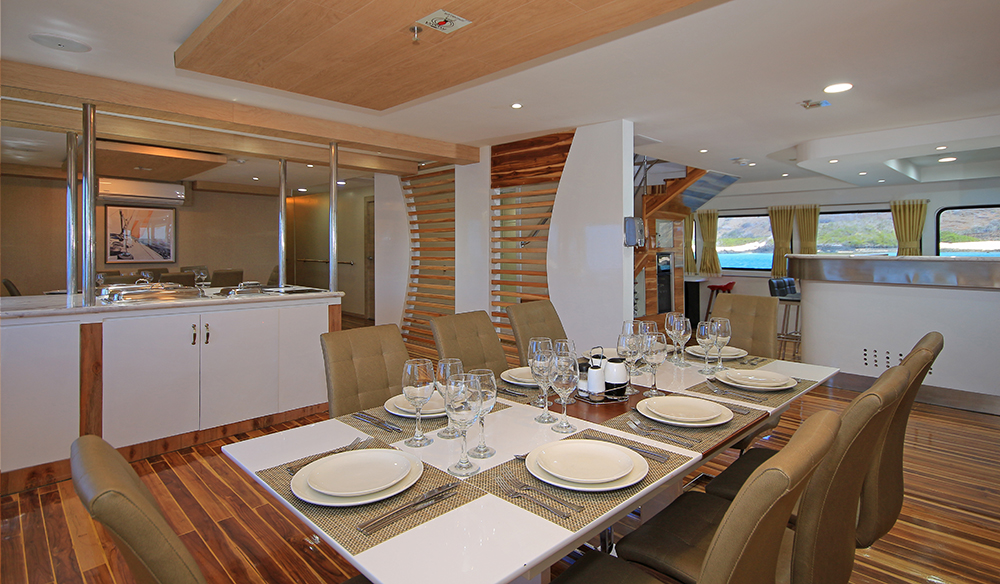 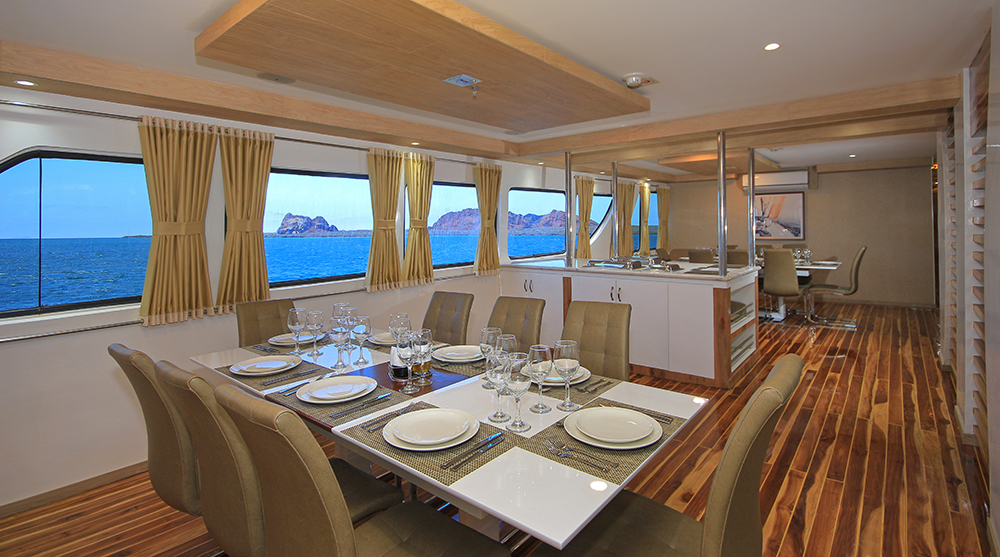 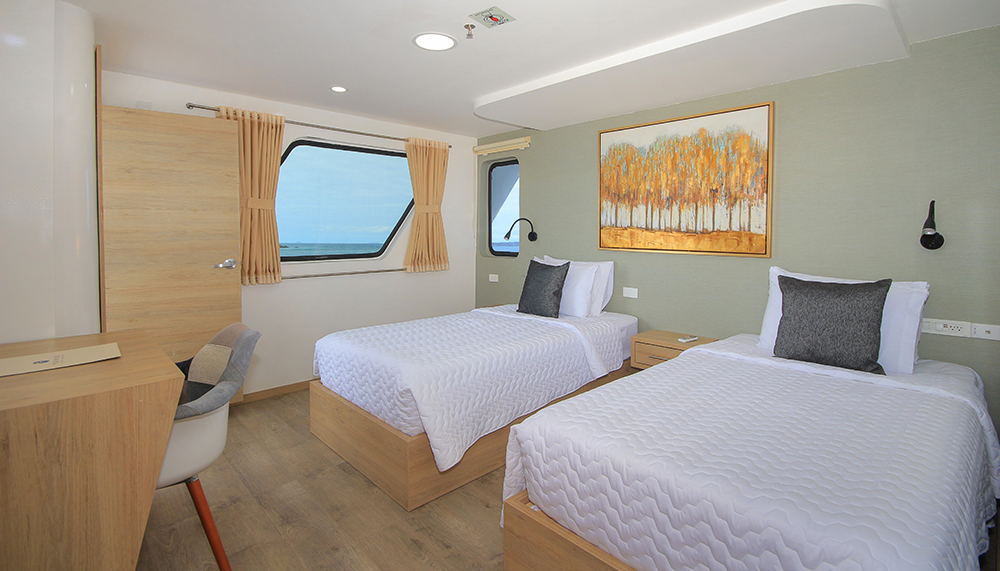 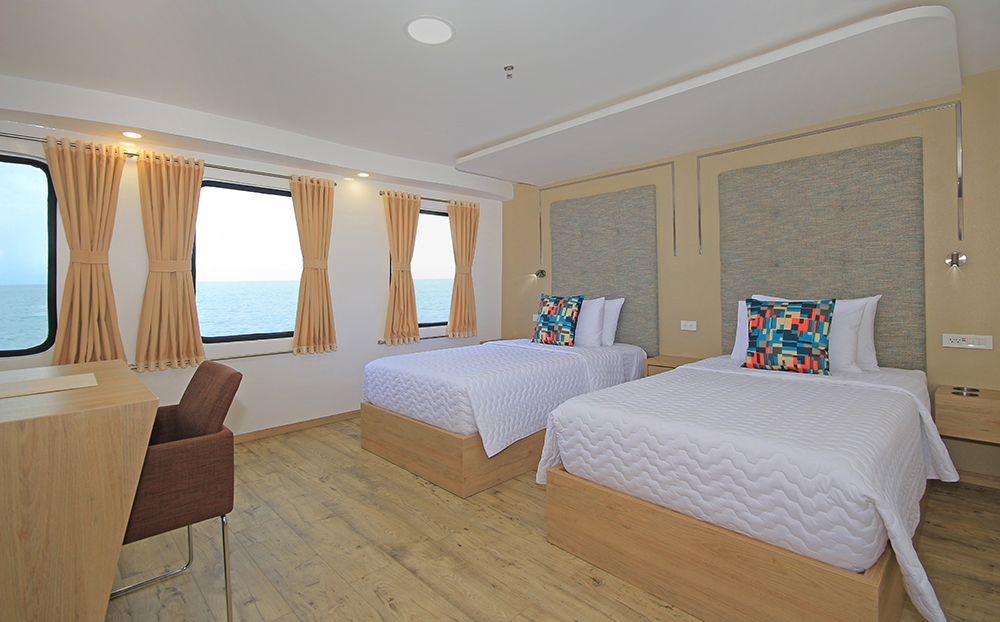 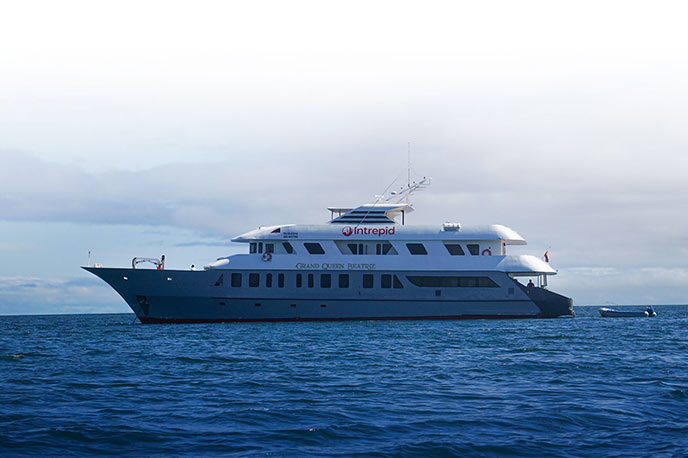 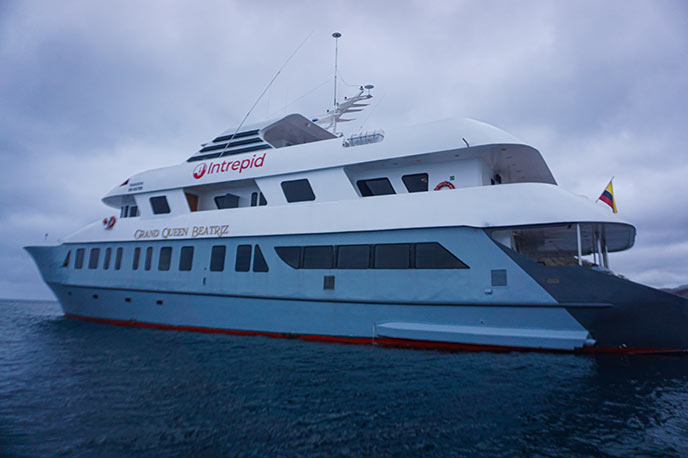 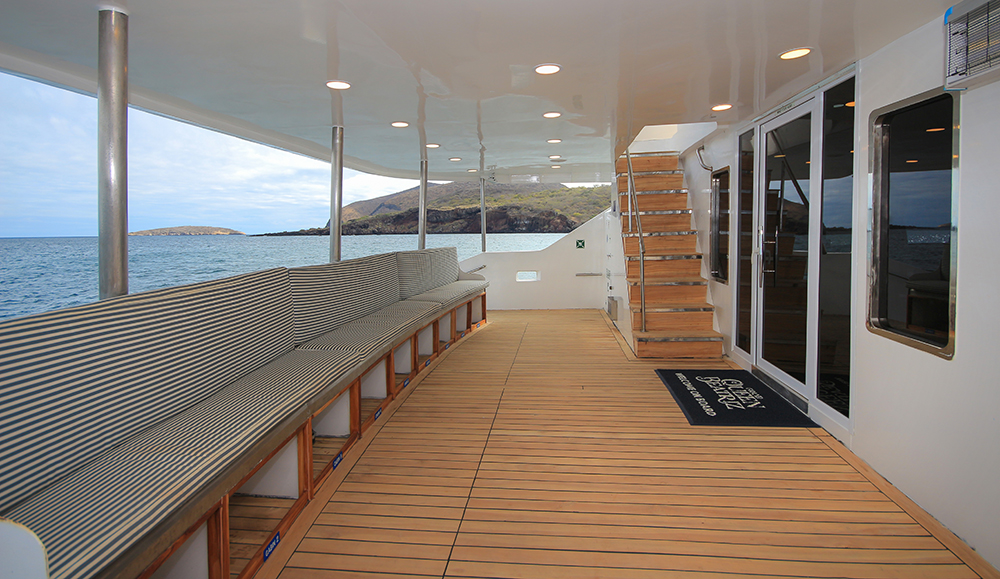 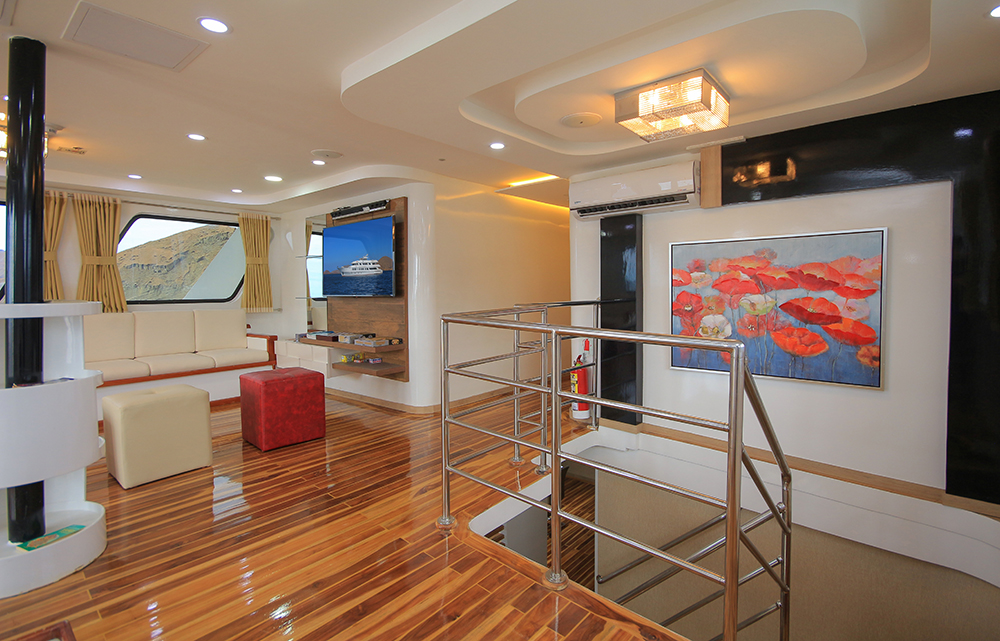 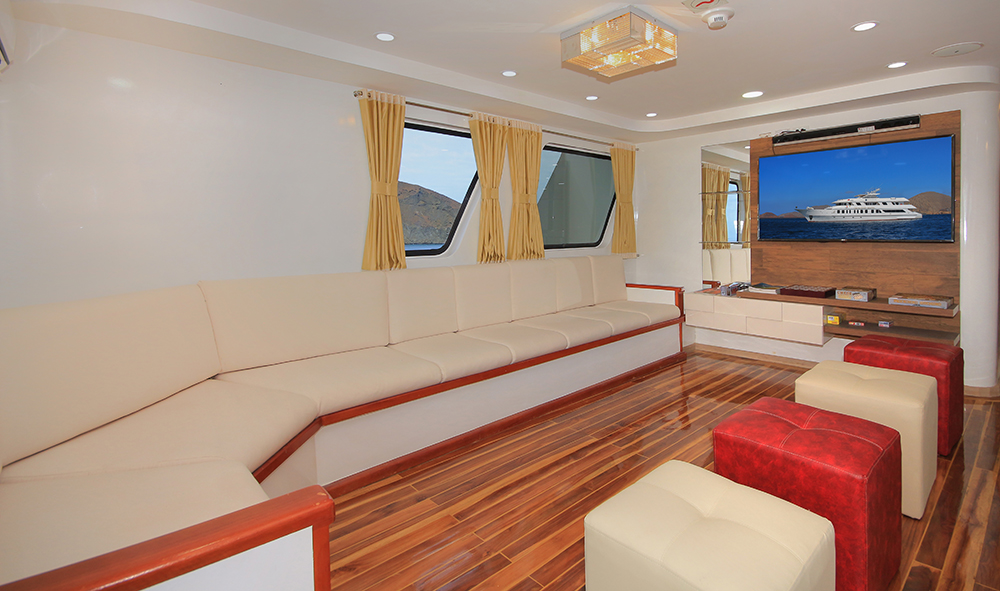 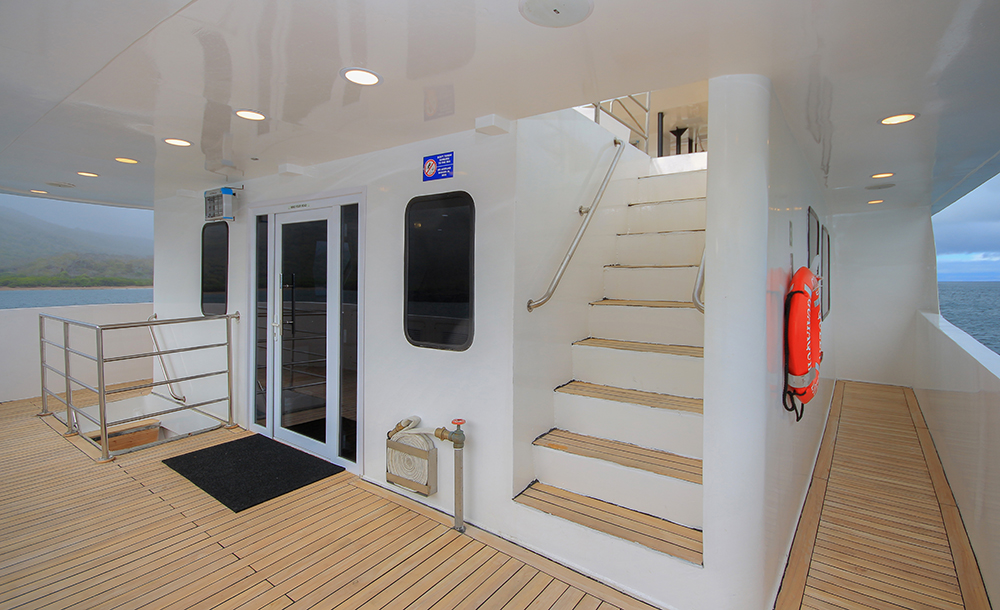 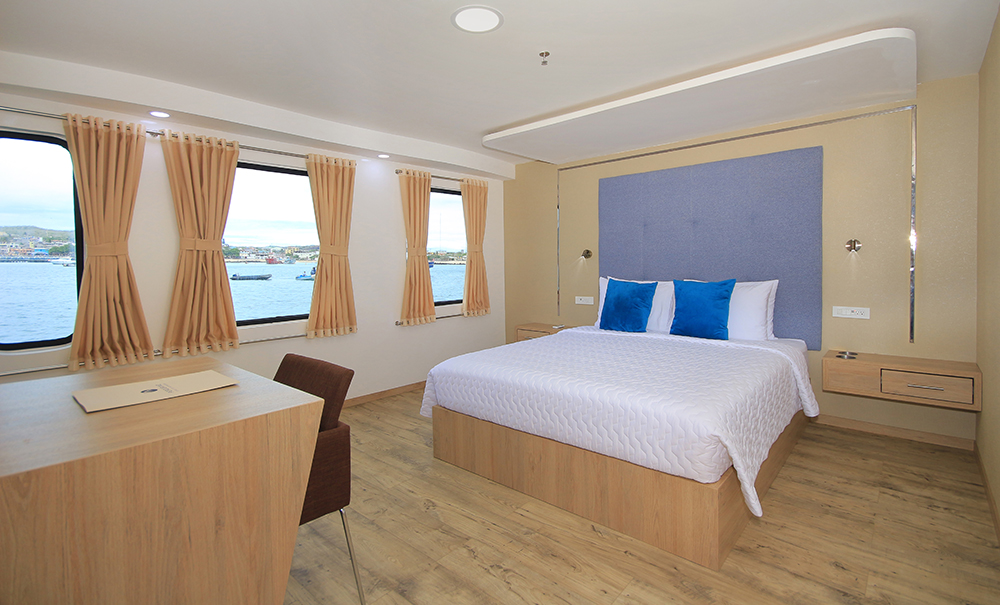 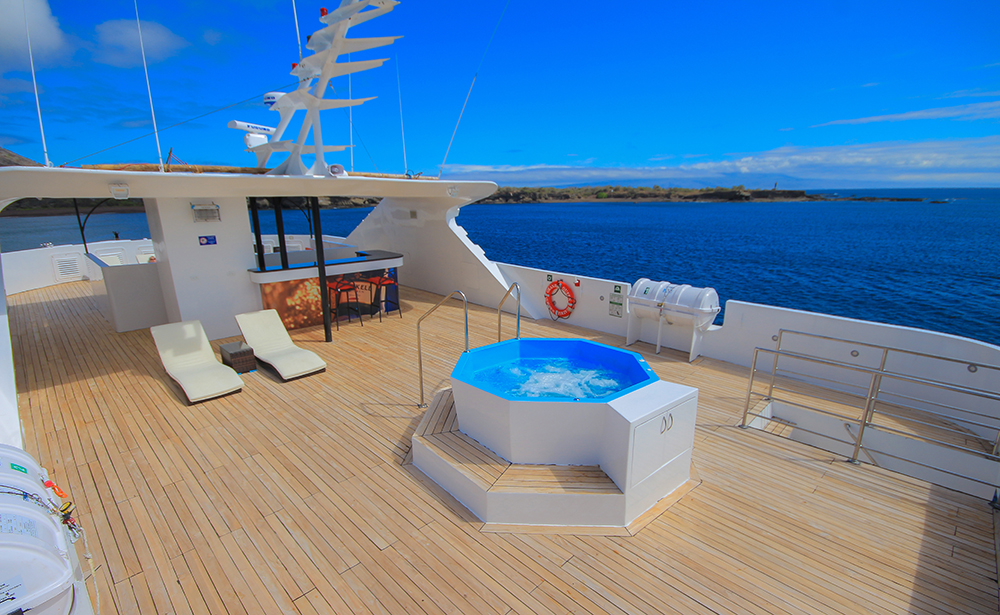 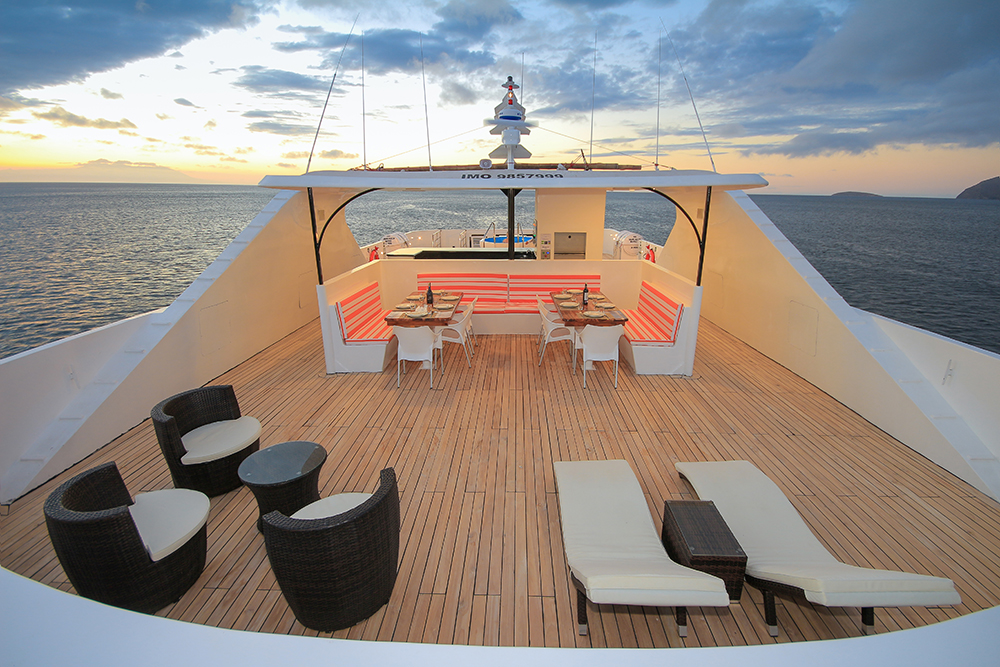 A US$20 per person transit card is payable on departure at Quito Airport and a US$100 per person national park entry fee is payable on arrival on the islands. Please have cash on hand for these transactions as using credit cards can be time consuming. You will be met in the arrival hall of the airport by the National Park Guide, and transferred to your catamaran ‘Queen Beatriz’.

This afternoon you will travel into the interior of the island to visit the highlands site of ‘Galapaguera of Cerro Colorado’ (Red Hill) where the national park has established a breeding program and information center for tortoises. Here, we will be able to see giant tortoises in their natural habitat and learn all about their origin, evolution and their threatened future.

DAY 2 - MONDAY: Bartolome Island / Sullivan Bay
Bartolomé is a relatively new island in the archipelago and traces of its volcanic past can be seen everywhere, as evidenced by the amazing lunar-like landscape.

The Pinnacle Rock is one of the most photographed sites in the Galapagos – an abrupt jag of rock protruding from the earth like a tooth, while nearby two golden bays back onto each other.
You can hike to the top of a once-active volcano here, and enjoy superb views across to Sullivan Bay, on nearby Santiago Island.

DAY 3 - TUESDAY: Espumilla Beach / Egas Port
Today you will visit some wonderful places. Espumilla Beach, on the northern coast of Santiago Island in James Bay, is one of the most idyllic locations in the Galapagos Islands and is an important nesting site for marine turtles. Espumilla beach is also well known for its Palo Santo Forest and some extraordinary lava formations.

This morning you will also visit Caleta Bucanero (Buccaneer Cove), a natural monument of rocks caused by sea erosion. This cove was used by pirates to careen their ships. It is a place of local legends and stories! Port Egas is a black sand beach located on the west side of James Bay and northwest of Santiago Island.
South of the beach is Sugarloaf Volcano, which has deposits of volcanic tuff. This site is named Puerto Egas, after Hector Egas who last attempted to mine salt here. The walk along the beach offers hundreds of marine iguanas, California sea lions and Galapagos fur sea lions.

DAY 4 - WEDNESDAY: Charles Darwin Station / Highlands
Today you will visit Santa Cruz, the second largest island in the Galapagos. The small town of Puerto Ayora is the economic center of the archipelago, and home to the Charles Darwin Research Station. As well as undertaking vital conservation work, the station also makes for interesting exploration and offers the best opportunities for close encounters with giant tortoises.

You will also observe baby tortoises and land iguanas. Afterward you'll head up into the highlands for a total change of scenery. Beginning at the coast you will travel across Santa Cruz through the agricultural region and into the misty forests. This is a lush humid zone containing miconia bushes, scalesia and inactive volcanic cones. Santa Cruz has more endemic plants than any of the other islands and you are likely to see Galapagos giant tortoises in their natural habitat and perhaps even the bright red feathers of a vermillion flycatcher!

DAY 5 - THURSDAY: North Seymour / Mosquera Islet
Today you will take a morning excursion to North Seymour. The trail on North Seymour crosses the inland through the island and then explores the rocky coast. Along the way the trail passes colonies of blue footed boobies and frigate birds. The magnificent frigate bird, a large black bird with a long wingspan, and a hooked beak, is extremely fast and has excellent vision. Frigate birds are known for the large red pouch on their necks. During mating season the males throw back their heads, inflate the pouch (sometimes to the size of a soccer ball), and shake trying to capture the attention of female frigates.

Boobies and frigates have an interesting relationship. Sharing the same nesting area on North Seymour, blue-footed boobies nest on the ground making their nests from the twigs of the palo santos trees, while the frigate birds nest just above them in the saltbushes.
After lunch you will visit the small sandy island of Mosquera, it’s a relaxing, picturesque stop. Along the rocks and in the tide pool, sally lightfoot crabs (red lava crabs) scamper back and forth, skipping across small pools of water in search of food. These crabs with their bright red shell tops and blue under shells are stunning against the black lava.

DAY 6 - FRIDAY: Black Turtle Cove / Dragon Hill
Today you will take a morning excursion to Caleta Tortuga Negra (Black Turtle Cove) - a red mangrove wetland on the north shore of Santa Cruz Island. You will paddle among the cove’s peaceful waters, for your first taste of the underwater riches of this region – it’s a wonderful place to see green turtle and is a nursery for rays and Galapagos sharks.

There is also abundant birdlife, such as the yellow warbler and lava heron. This is also a breeding area for turtles, so it is not uncommon to see them mating. Go for a walk on Cerro Dragón (Dragon Hill) this afternoon, this is one of the best places to see land iguanas in the islands. You’ll walk along the trail from the beach, and along with the land iguanas, other sightings include marine iguanas, flamingos and Sally Lightfoot crabs.

DAY 7 - SATURDAY: Chinese Hat / Rábida Island
Rabida, also known as ‘Jervis’ is a tiny island sitting roughly five kilometers south of Santiago and is one of the most striking of the archipelago. Introduced species were eradicated in 1971, meaning that the indigenous wildlife has now been returned to a state of splendid isolation. Additionally, volcanic activity here has produced vivid, fantastical colors, not least the beaches of red sand and cliffs of scarlet.

From the shore, the trail leads through to what is one of the finest lagoons in the Galapagos for viewing flamingos. Rabida is also a wonderful place to spot nesting pelicans. Elsewhere, pintail ducks, marine iguanas and sea lions are all present. Sombrero Chino is a small islet located near the south-east coast of Santiago. It's shaped like a Chinese hat (Sombrero Chino) when seen from afar, and is geologically fascinating, with many lava tubes leading from the cone to the coast.

DAY 8 - SUNDAY: Bachas Beach / Baltra
As flights to the mainland from Galapagos depart mid-morning, it is an early start for our last morning on the islands. Depending on the time of our flight, our time spent on this final excursion could be limited.
Today you will take an early morning excursion to Las Bachas, which was so named after the barges abandoned by the American Navy here in the 1940s. The sandy, white beaches of Las Bachas on the north shore of Santa Cruz Island are a nesting site for the Pacific green turtle, and marine iguanas are also commonly seen. The sand here is particularly white and soft as it is made of decomposed coral.

The rocks provide great snorkeling and are the perfect habitat for the Sally Lightfoot crabs, which are plentiful on the island. A saltwater lagoon near to the beach is home to flamingo and whimbrel, and look out too for great blue herons. This is your final excursion before you return to the airport in Baltra for your flight back to Quito.
As you will be leaving the boat this morning, please remember that if you have enjoyed the services provided by your guide and crew, a tip would be very much appreciated by them. As a guideline we recommend each passenger consider US$15 per day for the crew and US$10 per day for your guide. You can leave tips in envelopes that are placed in your cabin on this last day of your journey.