Our 6 night-route runs around the largest, seahorse-shaped island of Isabela, where nature seems to hunt for the greatest. Explore the virtually untouched western end of the Galapagos Islands, which has just been born out of fire. You are right on time for the first thrilling chapters of evolution! Uncover the mystery of how tough pioneer species make barren lava fields habitable; and approach bizarre outgrowths of adaptation as marine iguanas and flightless cormorants. It’s true that accessing this remote and isolated region demands longer navigation (mainly overnight), but our stable mega-catamaran enables you to witness ‘survival of the fittest’, without experiencing it 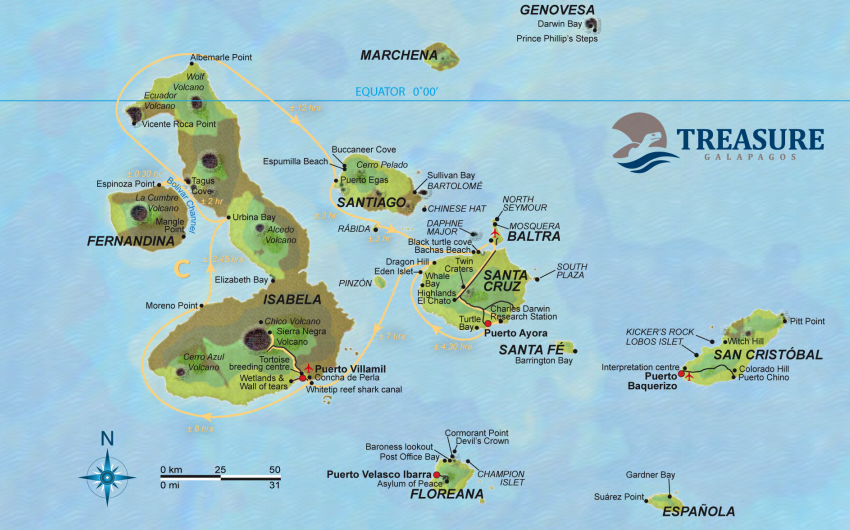 AM: Flight to Baltra Airport (GPS)

Upon arrival at Baltra Airport, you will pass through an airport inspection point to insure that no foreign plants or animals are introduced to the islands, as well as to pay the park entrance fee of $100 (unless it has been prepaid). A guide will meet you, help you collect your luggage, and escort you on a short bus ride to the harbor.

Although the great majority of Galapagos visitors come here to observe and appreciate natural wonders, it is also interesting to learn how the protection and conservation of the islands are carried out. The main attractions are the National Park information center, the Van Staelen Exhibition Hall, the Breeding and Rearing Center for young tortoises, and adult Galapagos tortoises in captivity.

The visitor site of whale Bay is a cove of green sand at the base of Dragon Hill on the west coast of Santa Cruz Island. The beach contains a large amount of olivine crystals, the same that originate from volcanic materials. The crystals were formed when the magma was still underground.

Near the beach there are ceramic relics, which reflect the same antiques of human settlements that were close to the beach in 1846. According to the accounts of the French captain Genie, a path originated from this site to the top of the island, which was used to collect fresh water. It is thought that in this place lived a group of people who were dedicated to the collection of lichen, used for tinting.

The visitor site at Dragon Hill has been open for visits on 1993. This site is located in northwestern Santa Cruz Island and consists of a trail that lead to a hyper-saline lagoon behind the beach, frequented by flamingos, pintail ducks and other species of birds. This site has been re populated with land iguanas from Seymour, Isabela and Santa Cruz islands. There is a short walk to the Hill, which offers a beautiful view of the bay.

A delightful place to be reached by a nice zodiac ride. "Tintoreras” are small islands in front of Puerto Villamil coast. There is Heron lava on the lookout on mangrove branch, and Galapagos Penguin and sea lion often pop out on shore. White-tipped reef sharks are fairly common in the archipelago. Their name in Spanish is Tintorera, thus the name of this site as they are always found here resting in the shallow waters.

Isabela Island is the largest and one of the youngest islands in the Galapagos archipelago. We land in Puerto Villamil, which has the second smallest population in Galapagos with approximately 3.000 inhabitants. First we will visit the Flamingos Lagoon; this place is the largest coastal lagoon found in Galapagos and is one of the main reproductive sites for the greater Flamingos. Afterwards we will follow a trail to the “The Wall of Tears”; from 1946 to 1959 Isabela was designated a penal colony by the Ecuadorian government. Prisoners were obligated to build a wall with enormous blocks of lava. Due to the

arduous labour and harsh conditions in which the prisoners lived, this site is known as “El Muro de las Lagrimas”. There are a number of interesting sites along this route, such as the cerro Orchilla, El Estero, Poza Escondida, Playa del Amor and Pozas Verdes.

Punta Moreno is located on the north coast of Isabela Island between the volcano Sierra Negra and Cerro Azul volcano. The trail runs along a lava flow Pahohoe (solidified lava in the form of corrugated or an accordion) into a complex of coastal lagoons, its main attraction are several species of birds which can be found around this lakes and mangroves

Urbina Bay is located along the west coast of Isabela, between Elizabeth Bay and Tagus Cove. It is close to the base of the Alcedo Volcano. The coastline has undergone a major uplift in 1954, which caused the shore to expand three quarters of a mile out. Here you will be able to find corals, shells, and many other calcareous organisms exposed above water. Urbina Bay is home to large and colorful land iguanas and giant tortoises of the Alcedo Volcano population. A lot of Darwin finches can be seen as well.

Fernandina is the third largest island in the archipelago and has a single visitor site: Punta Espinoza located at the northeastern tip of the island. Marine iguanas conglomerate in larger groups than in any other island. They bask around in the sand, swim near the shore and some time block the way at the landing dock. Among the unique species found here, is the Flightless Cormorant. This bird had to adjust its way of survival and perfection its skills of finding food in the ocean. Their wings, tails and feet progressively adapted for swimming. To see these birds, is to witness evolution happening right in front of you.

Tagus Cove, a tour along the cliffs in a zodiac will give the visitors a good chance to see the Galapagos penguin, the flightless cormorant and other sea birds. From the landing dock it is about a 30 minute hike along the trail up to the top of the clif from where you can view Darwin Lake, an uplifted ultra saline lake saltier than the sea. You can also see several volcanoes from this location. Look carefully at the graffiti on the surrounding cliffs of the cove, it has been written by pirates, whalers and buccaneers in past centuries.

Puerto Egas is a black beach is located at the west side of Santiago Island. Volcanic tuff deposits have favored the formation of this special black sand beach and this is the main attraction of the Island. This site is called Puerto Egas, because there was an attempt of company of Hector Egas, to start the exploitation of salt, which failed because the price of salt on the continent was very cheap, and did not justify its exploitation in Galapagos. The project was abandoned and they left their infrastructure.

Rábida Island is unique because the red color of the rocks and sand. The volcanic material in this island is very porous and external factors as rain, salt water and sea breeze have acted as an oxidizing agent.

A short walk along a trail lead us to a coastal lagoon behind the beach permits the observation of land birds as finches, doves, yellow warblers and mocking birds. At the lagoon there is a colony of flamingos.

These two small beaches are found to the West of Turtle Cove. Their sand is made of decomposed coral, which makes it white and soft, making it a favorite nesting site for sea turtles. Behind one of the beaches there is a small brackish water

lagoon, where occasionally is possible to observe flamingos and other coastal birds, such as black-necked stilts and whimbrels. The other beach is longer, but it has two old barges that were abandoned during the Second World War, when the USA used Baltra Island as a strategically point to protect the Panama Channel.

Transfer to Baltra Airport (GPS) for your flight back to Guayaquil or Quito.