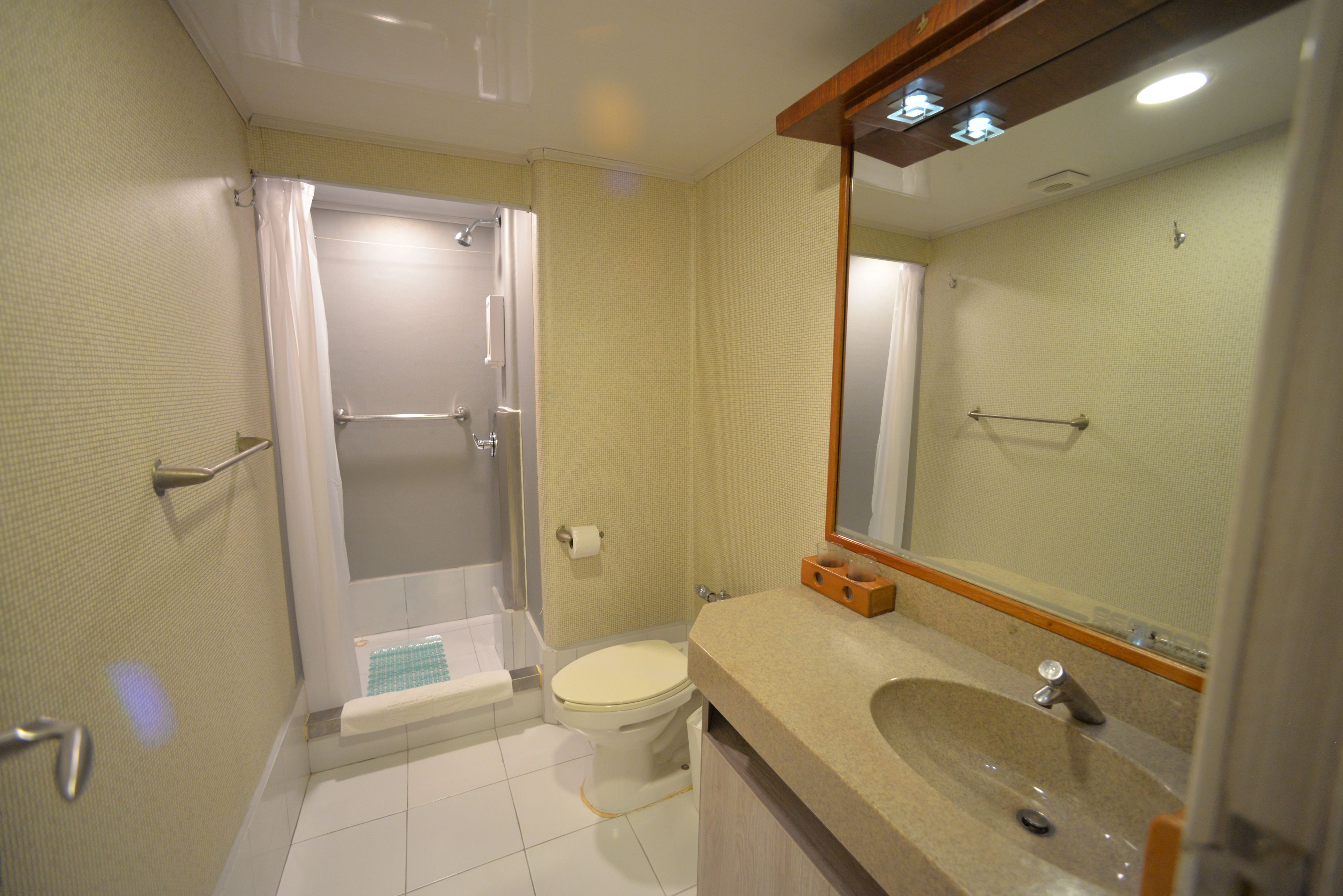 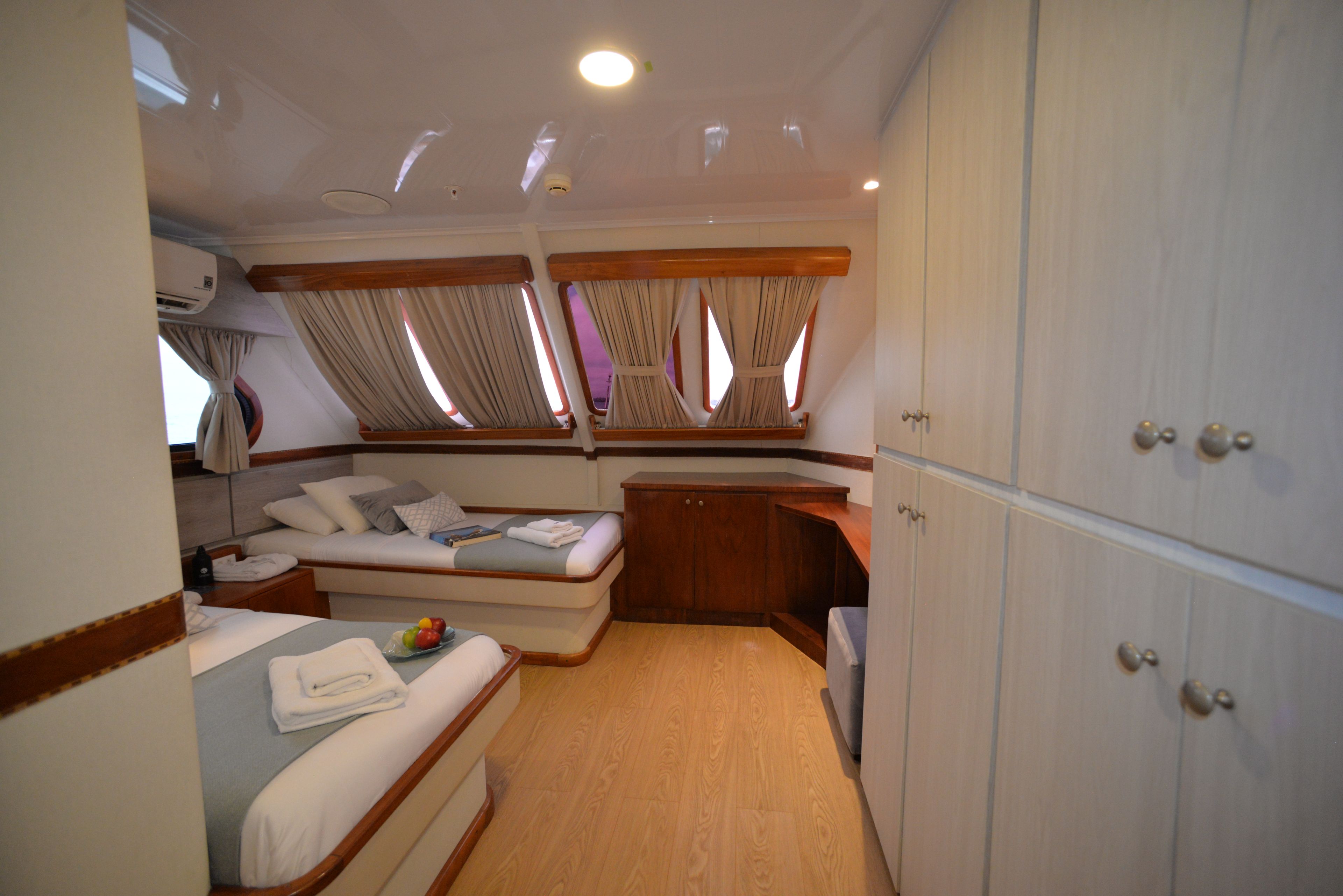 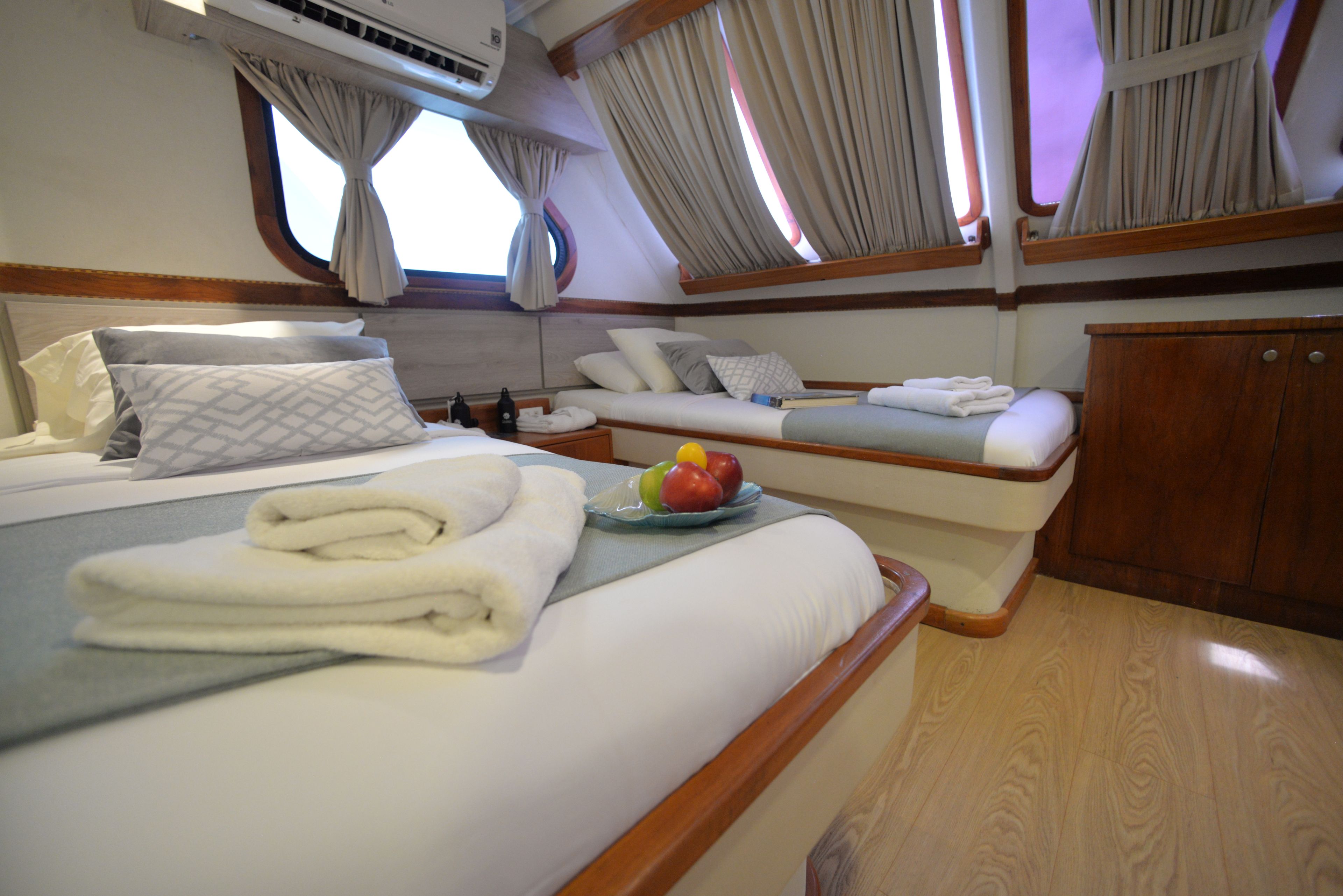 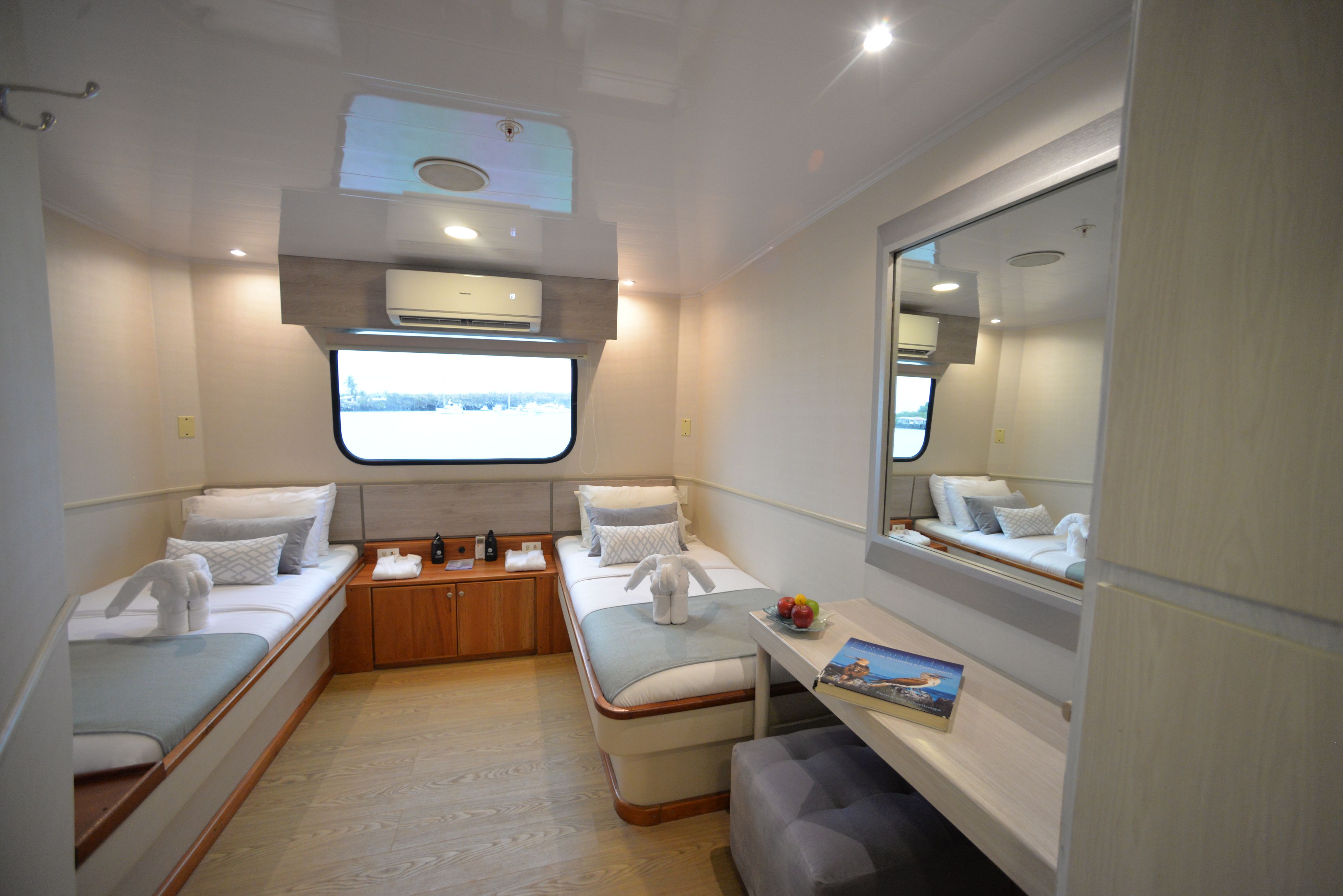 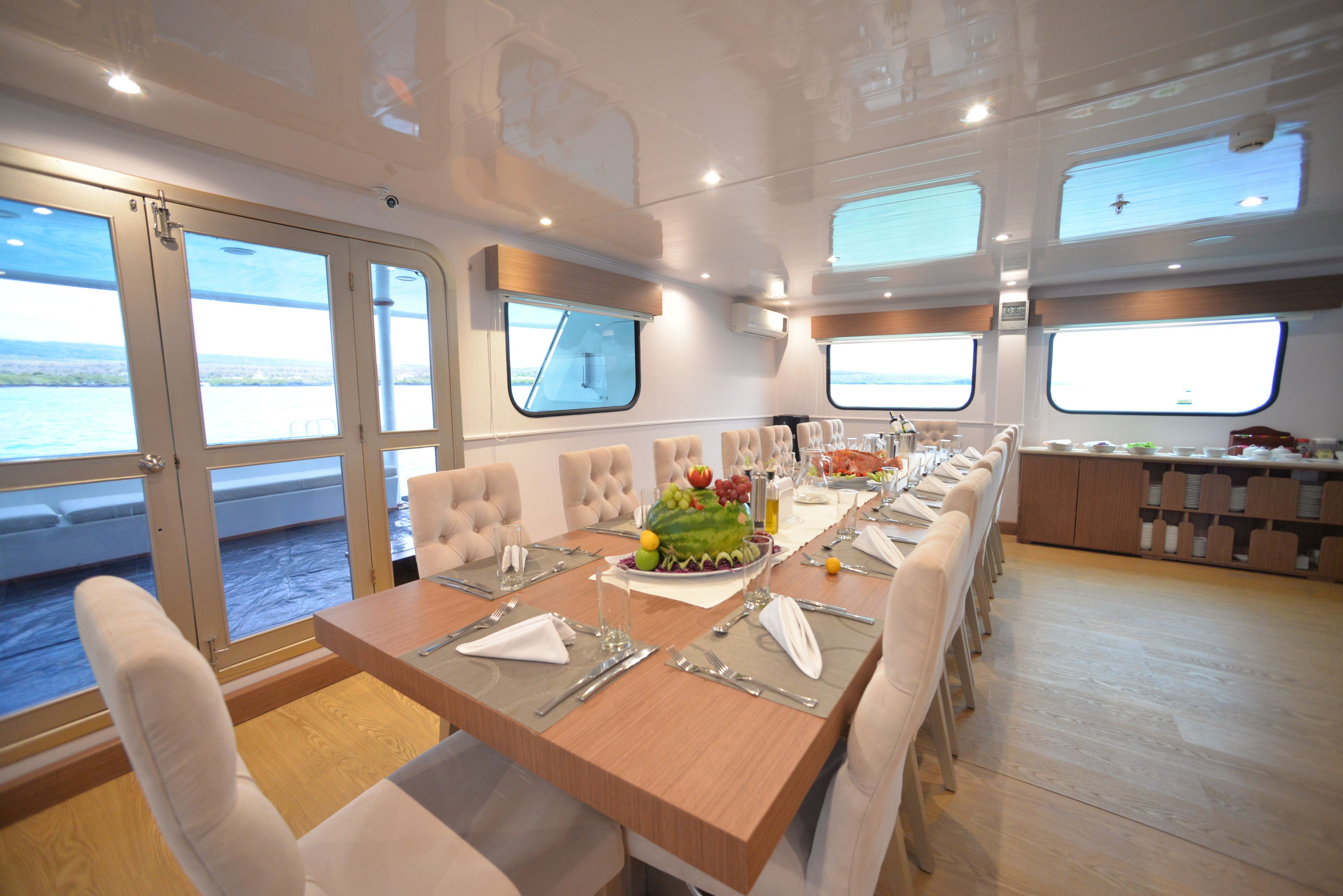 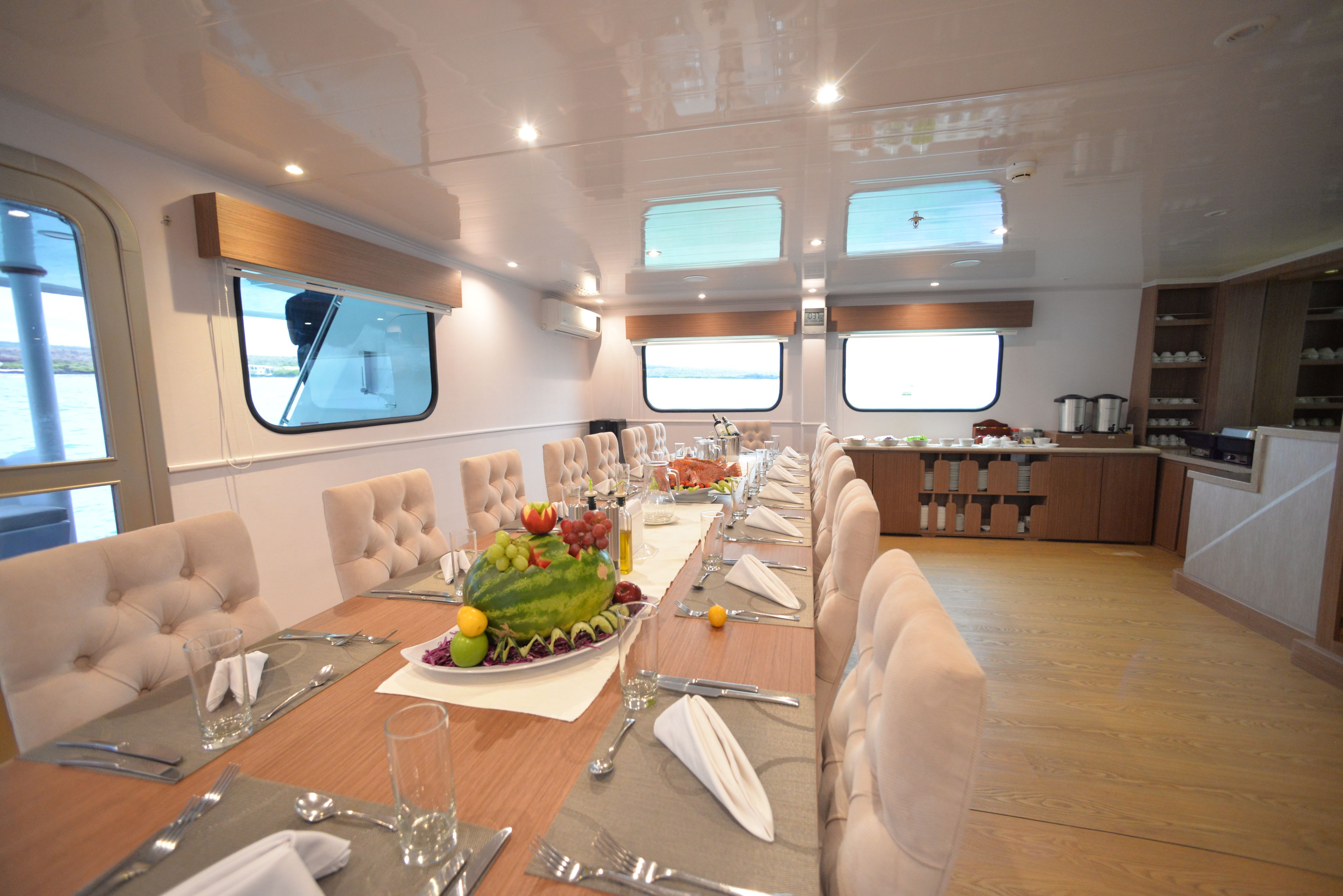 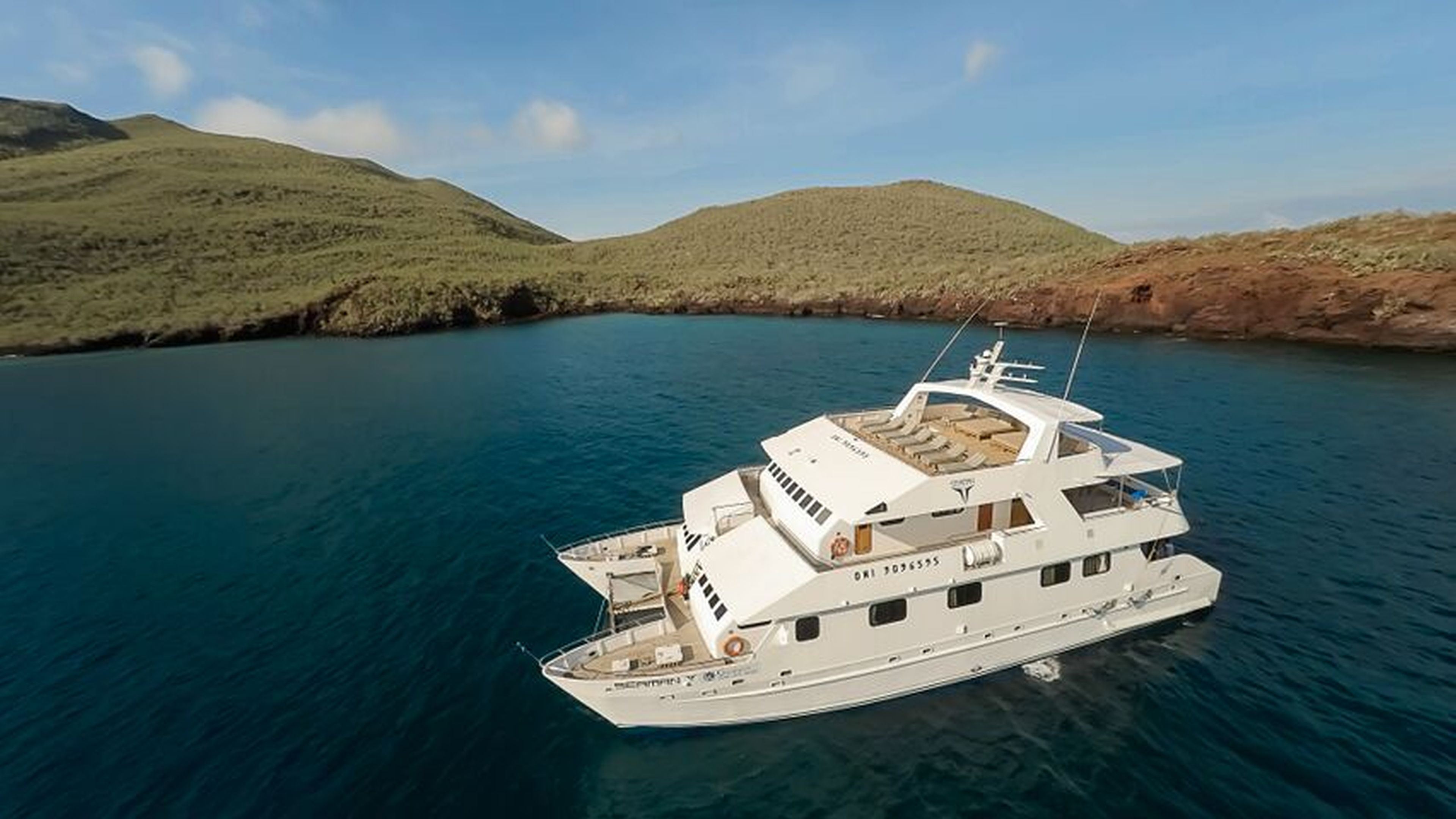 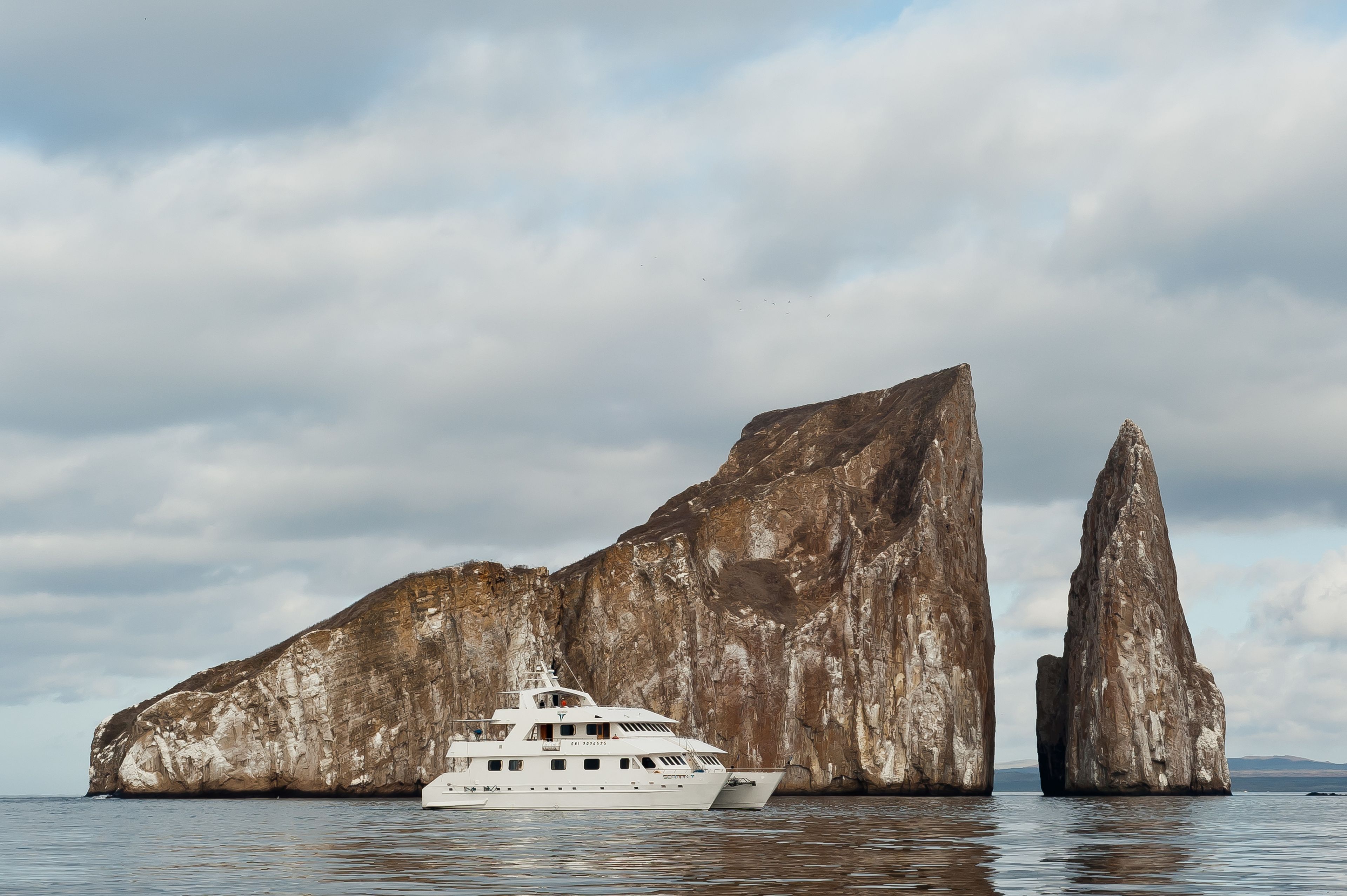 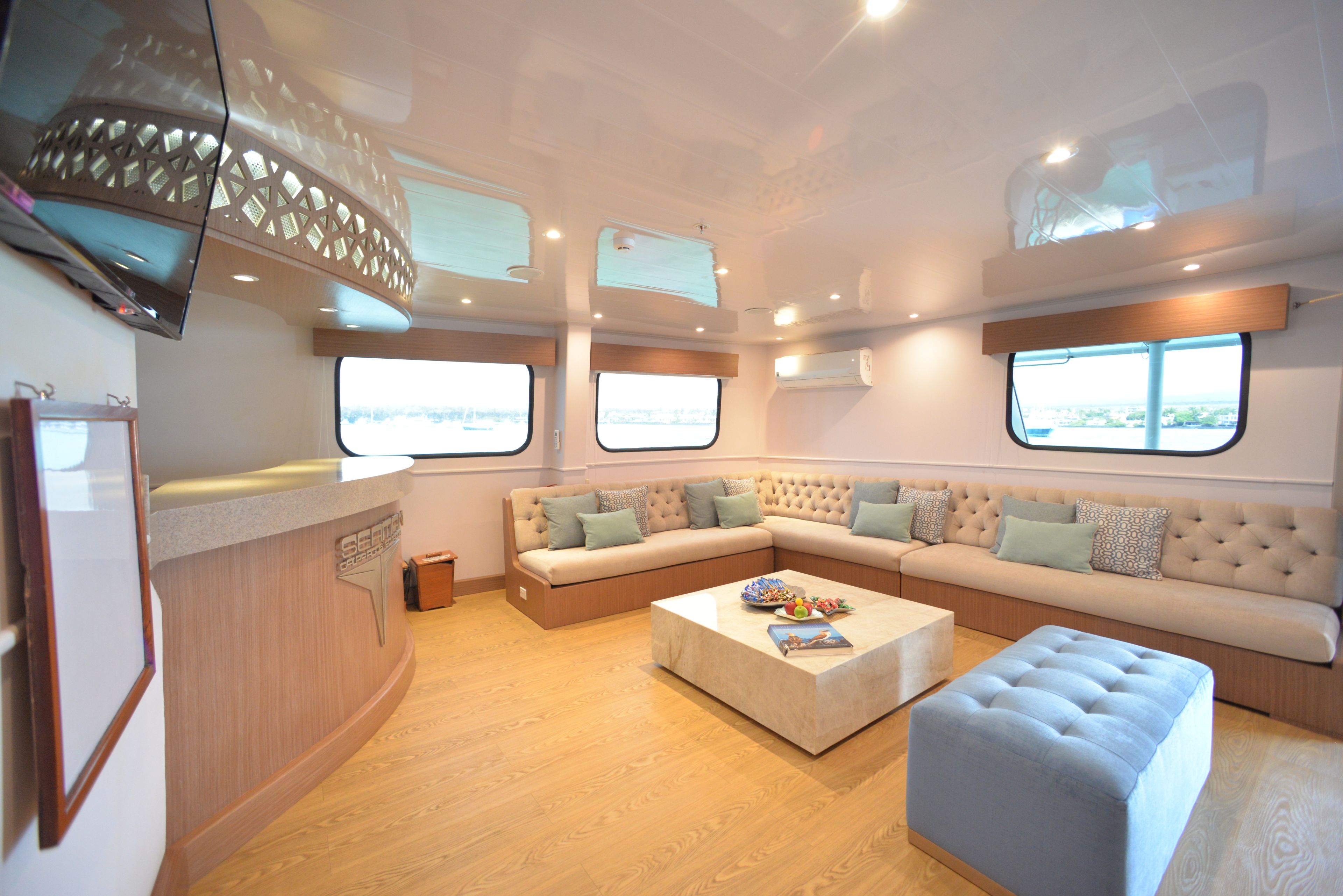 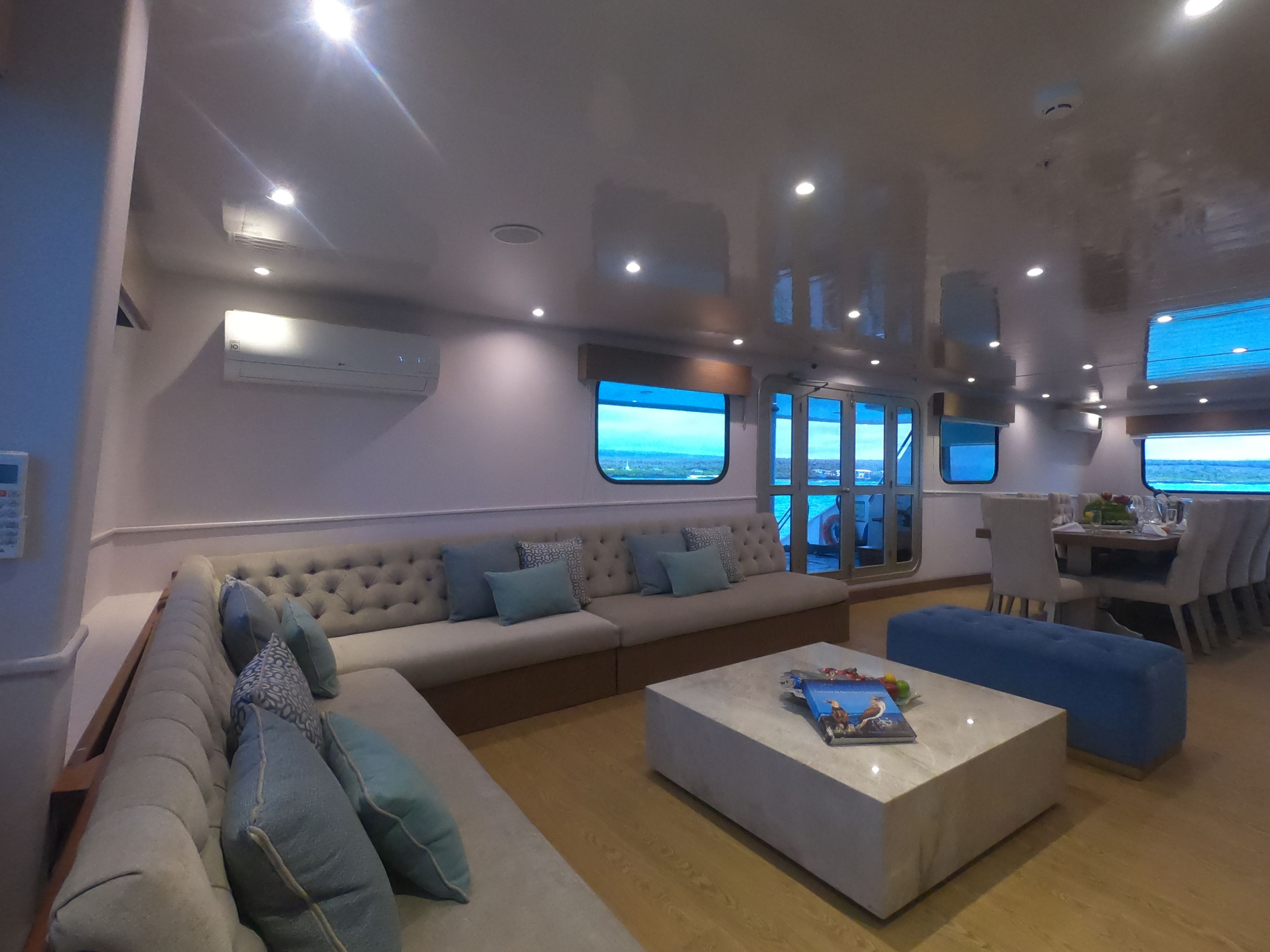 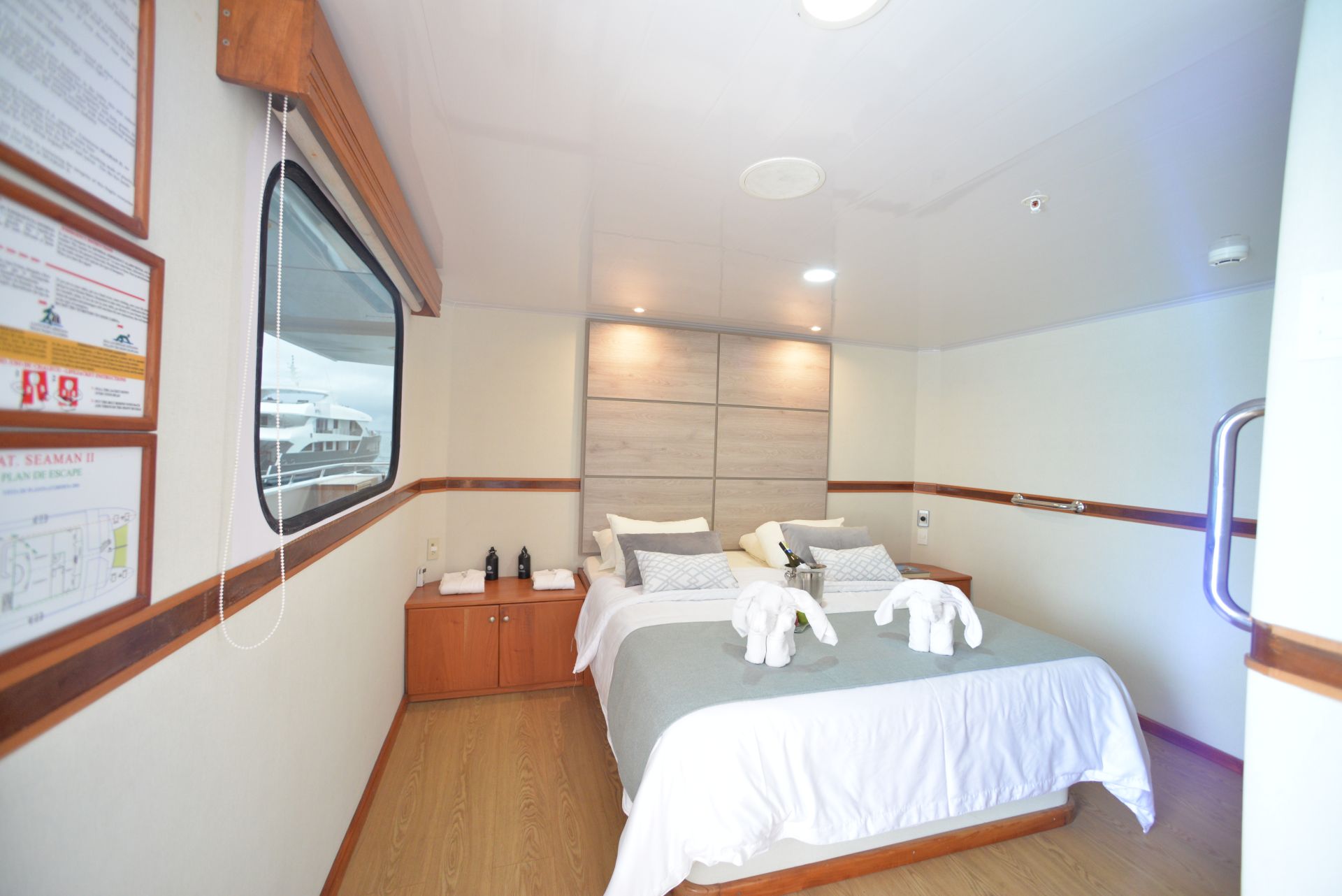 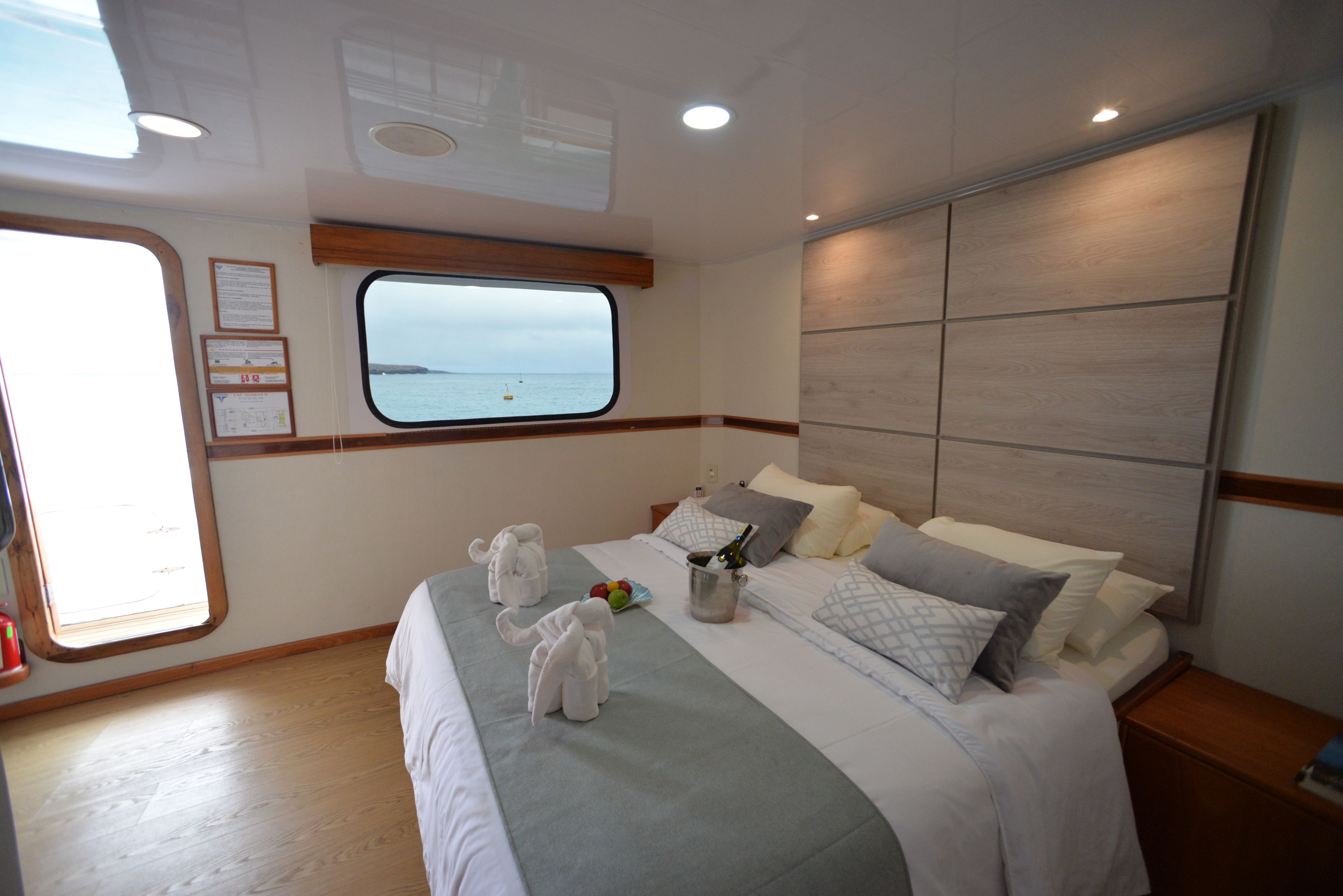 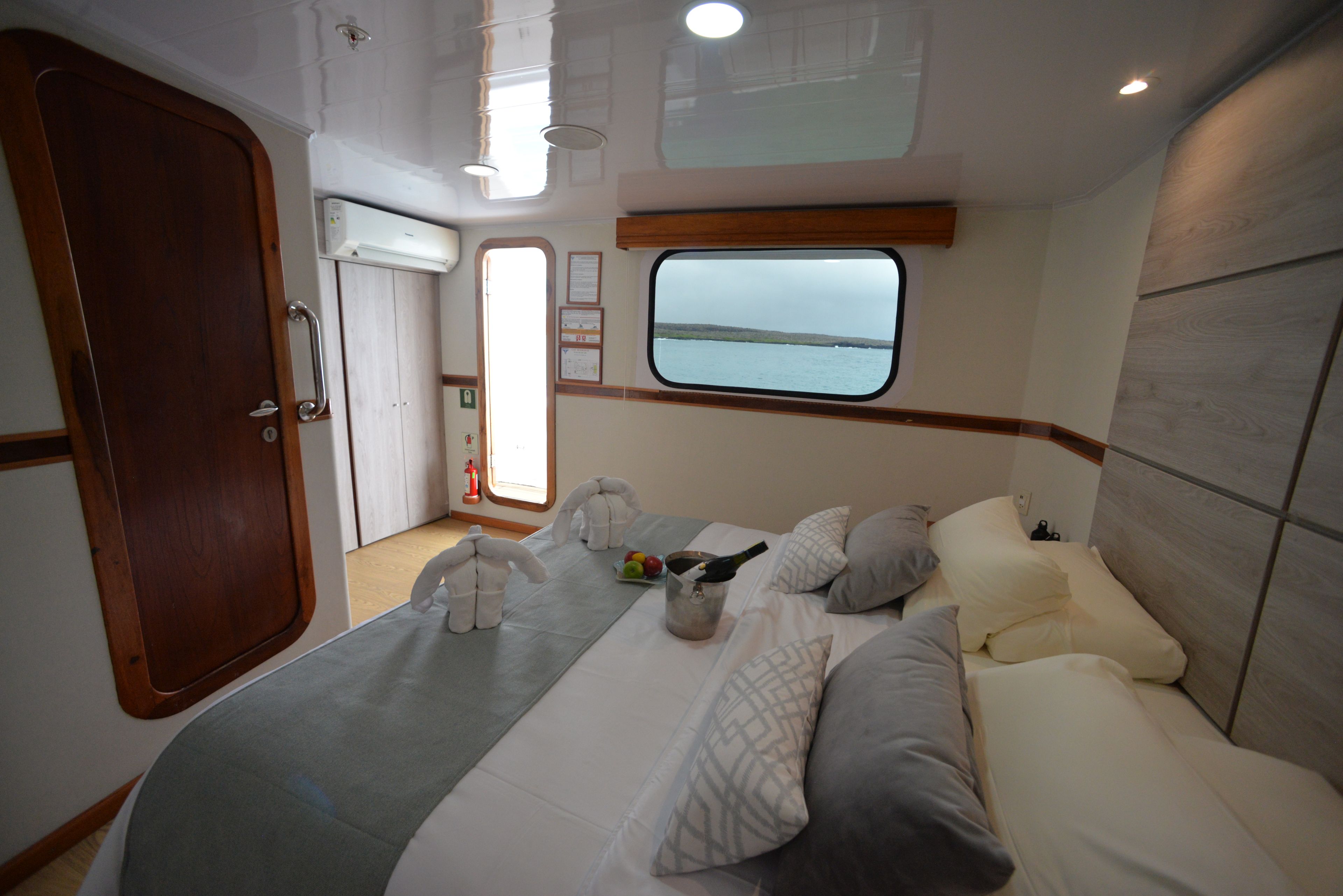 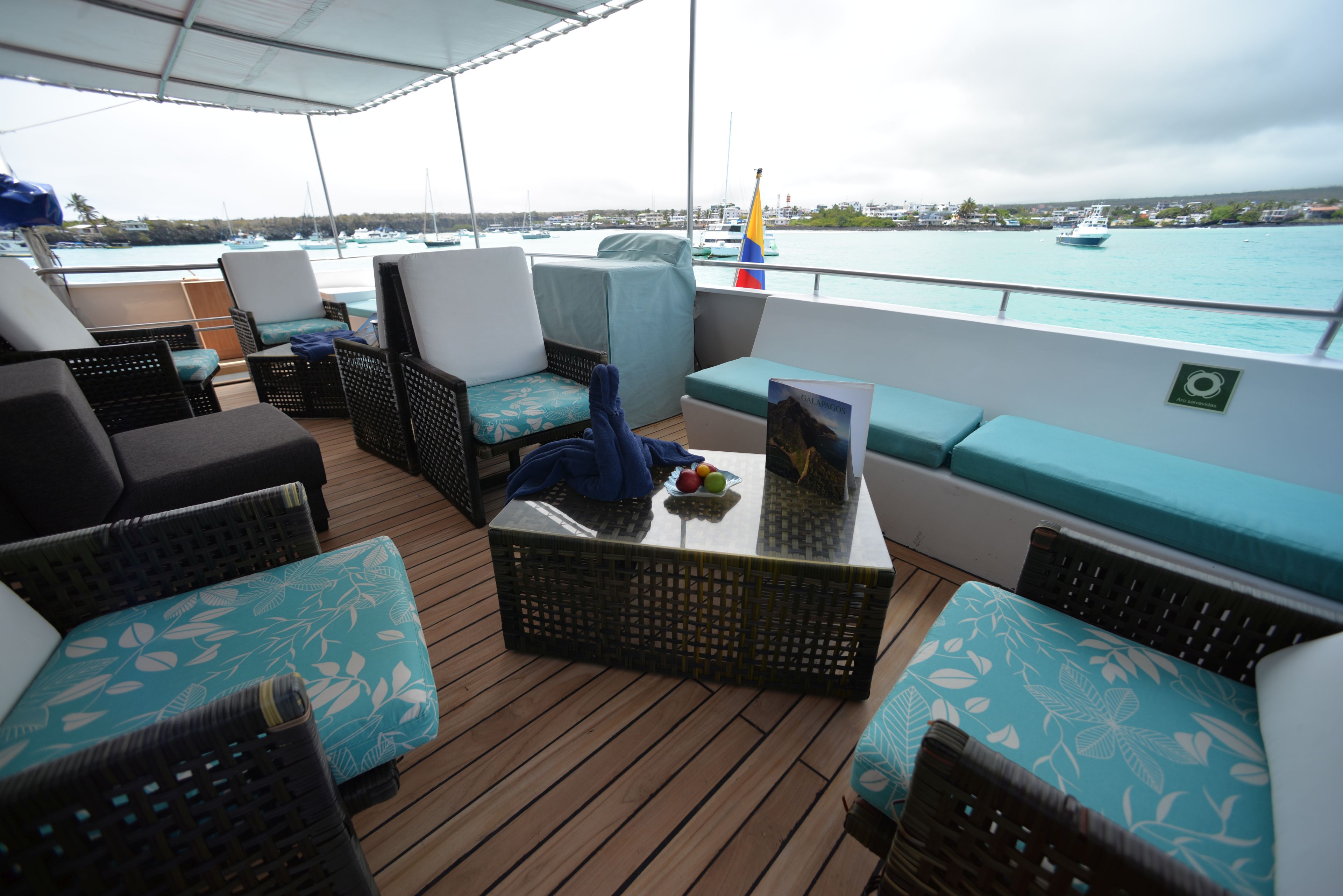 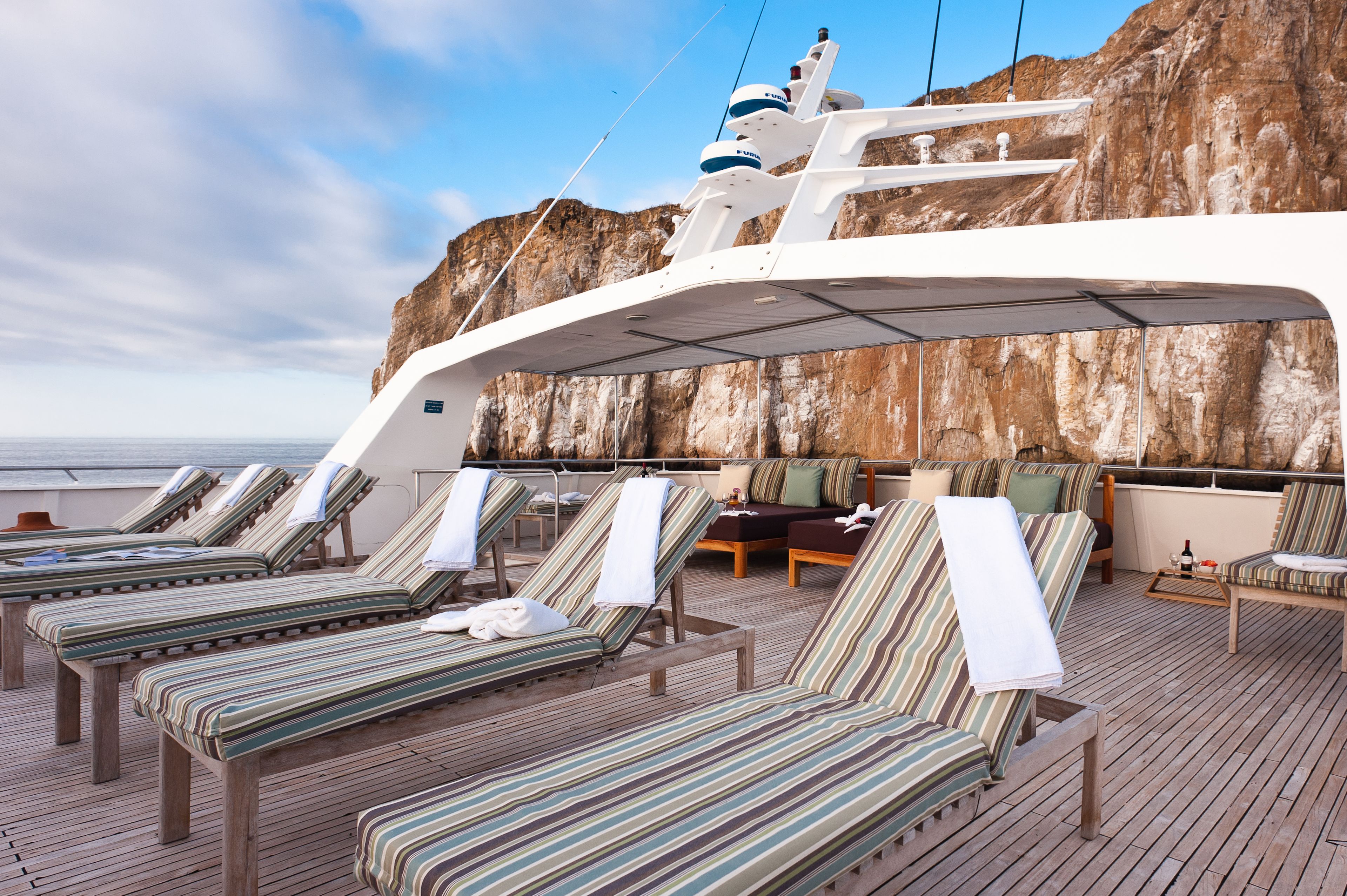 A complete overview of Galapagos combining the amazing birdlife at Genovesa with natural history sites like Post office bay. Unique species like the waved albatross and the Red Footed boobies. Bothe north and south of the archipelago, different wildlife and different scenery, a varied expedition that will amaze the most unmovable traveler.

AM: FLIGHT TO GALAPAGOS

This day you will fly from Quito, Ecuador to the Galapagos. Afterwards, you will enjoy a quick 4 hour flight, with a quick stop at Guayaquil.

Once in Santa Cruz, passengers must go through an inspection point at the airport to make sure that no foreign plants or animals are being introduced to the archipelago. Later on, our guide will pick you up and will carry the luggage to the bus from the port, that transports the passengers, to the Catamaran Semana Journey on a motorized boat called panga.

North Seymour is an uplifted (as opposed to volcanic) island. Therefore, it is generally flat and strewn with boulders. There are good nesting sites here for a large population of magnificent frigate birds. Blue-footed boobies perform their courtship dance in the more open areas and swallow-tailed gulls perch on the cliff edges.

Despite the tremendous surf that can pound the outer shore, sea lions haul out onto the beach and can be found bodysurfing.

The visitor site of El Barranco is located in the southern part of Darwin Bay from Genovesa Island. The trail is on volcanic rock, consists of 1.5 km and can be done in about 2 hours. The youngest area of the island, from a geological point of view, lies on this area. The cliff is located in the south, are composed of very fragile lava. The natural erosion in these lava flows has become the ideal place for nesting Storm Petrels. You can see two species of petrels that nest in cavities and holes in the lava.

One of its main predators is the short-eared owl. The red-footed booby nests only in the outer islands of the archipelago, Punta Pitt, Gardner (Floreana), Wolf, Darwin and Genovesa. Also present on this island is the masked booby. During the “panga rides” along the cliffs, fur sea lions and several species of seabirds can be seen.

This bay has its origin when the crater of this island collapsed below sea level. The wet landing is on a beautiful white coral sandy beach. This is a favorite island for birdwatchers that allow the following species to be seen: red footed-booby, masked boobies, wandering tattlers, lava gulls, whimbrels, yellow-crowned, and black-crowned lava herons, and yellow warblers.
Continuing on the trail, visitors climb gradually to the edge of the cliff seeing Red-Foots nesting in the Mangrove trees below. Bird watching includes sightings of sharp-beaked finches, large cactus and ground finches, Galapagos doves, and swallow-tailed gulls. Reaching the end of the trail, at the cliff’s edge an incredible view of the island and the many birds living there can be observed.

Plazas is located at the east of Santa Cruz Island, and forms part of two islands known as Islas Plazas. Despite its small size, some of the most interesting and outstanding species of the Galapagos are found here. The Plazas land iguanas are smaller than its relatives found at other islands.

Throughout the island are several hybrid iguanas, a result of crossing a male marine iguana and a female land iguana, they are unique, recognizable at first glance by their black/gray color, with a land iguana’s crest, but face and tail of the marine iguana. The big population of iguanas is due to the presence of tunas, their favorite food. Swallow tailed gulls nesting in the rugged cliffs are seen along with other seabirds as: Audubon shearwaters, red-billed tropicbirds, frigate birds, and brown pelicans.

Located in the southeastern part of the Galapagos, this island was formed from an uplift instead than a volcanic origin, this is why it is mostly flat. There are some theories which assure this could be the oldest island in the Archipelago. Santa Fe is the home of a number of endemic species like the Galapagos hawk, Galapagos snake, Galapagos mockingbird, rice rats, and one of the two species of land Iguanas of the islands.

After disembarking in the beautiful and clear waters you will be in contact with one of the many sea lion colonies. Along the trail many salt bushes can be seen as well giant Pickly pear cactus: gigantism is a characteristic of oceanic islands. There are great possibilities of snorkeling with playful sea lions and tropical fish.

In 2004 the Breeding and Rearing Center for young tortoises Jacinto Gordillo, named after a famous settler, was located in Cerro Colorado, San Cristobal Island, in order to take care of young tortoises. In 2008 an assisted reproduction program started on the island with due to the birth of a little turtle in captivity. All of this will be learnt at the Jacinto Breeding Center. One can not only learn about breeding processes but as well get engaged and experience why they this breeding centre does what it does.

This is an interpretation center with exuberant gardens and stunning ocean views in contrast with the 1960´s buildings in Charles Darwin Center. Visitors at the interpretation center can learn a lot about the geological and human history of the islands, conservation facts and natural history. This is the oldest museum of Natural History in Galapagos Islands that is trying to preserve the nature of the islands.

A short visit to the Galapaguera that is a good place to observe Galapagos tortoises in its natural habitat.
San Cristobal island has endemic species such as: the Mockingbird Nesomimus melanotis, lava lizard (Microlophus bivittatus), Chatham Leaf-toed Gecko (Phyllodactylus leei) and the tortoises. All of these species can be observed in this place, the beach is really big and it works as a nesting zone for marine tortoises.
Between January and May, it is common to find the footprints of the female tortoises that have climbed to the sand dunes to deposit their eggs.

cerro-brujo-galapagos-islandsCerro Brujo is a beautiful white coral beach where you can swim and watch birds and sea lions, plus you can snorkel.
This is the first coast where Charles Darwin ever walked on in 1835. In this marvelous lava landscape, you can see seabirds like blue-footed boobies, Nazca boobies, herons, frigate birds and shore birds. The protected bay is very popular to observe young tortoises and for swimming.
The pools with salty water behind the sand dunes were used by the fishermen as a salt mine in order to preserve food for the local population.
Among the fauna, you can observe the Chatham Mockingbird and the San Cristobal Lava Lizard, both species being endemic to the island and unique to the area as they cannot be observed nowhere else. Furthermore you can find the island canary, the Galapagos turtles and with luck the little bird known as the Pájaro Brujo in Spanish, an endemic specie from San Cristobal Island. The vegetation covers all the route where you can find species like the candelabrum cactus and carob trees.
Located on the north coast of Isla San Cristobal, here Cerro Brujo, is the place where we can find a relaxing and beautiful place to be at.

AM: GARDNER BAY
Located on the north-eastern coast of Hood, we find Gardner Bay. It provides an excellent beach for relaxing, swimming, snorkeling, kayaking, and the opportunity to observe sea lions. Here we can also observe sharks in the crystal clear ocean waters.

This area is great for spotting blue-footed boobies, albatrosses and Nazca boobies. A beautiful site on the oceanfront, the large waved albatrosses use the cliff as a launching pad. The famous attraction is the magnificent blowhole, spurting water high into the air at least from 50 to 75 meters high. This site presents wonderful photograph opportunities.

This site offers probably the best flamingo lagoon in the Galapagos; it is also one of the largest in the islands. It’s situated between two tuff lava cones that give the area a special atmosphere. There are various species of shorebirds to observe besides flamingos; the most frequent are common stilts, white-checked pintail ducks, and other migratory birds.

It is very interesting to see the two distinct beaches: “The Green Beach” (due to its high percentage of olivine crystals in the sand) and the “Flour Sand Beach” which is made up of coral.

Historically, this site is the location of a wooden barrel that was placed in the 18th century by the crew of a whaling ship. It has been used since this time by mariners and tourists as a post office. The idea is to carry letters or postcards to their destination by hand. Apart from being the Post Office Barrel, this site was the landing area for some of the first colonists.

AM: TURTLE’S TRAIL
Although the great majority of Galapagos visitors come here to observe and appreciate natural wonders, it is also interesting to learn how the protection and conservation of the islands are carried out. This path offers the possibility to learn aspects and feel synchronized with nature.

After the morning excursion you will be taken to the airport for your
flight to the mainland. Transfer to Baltra airport.