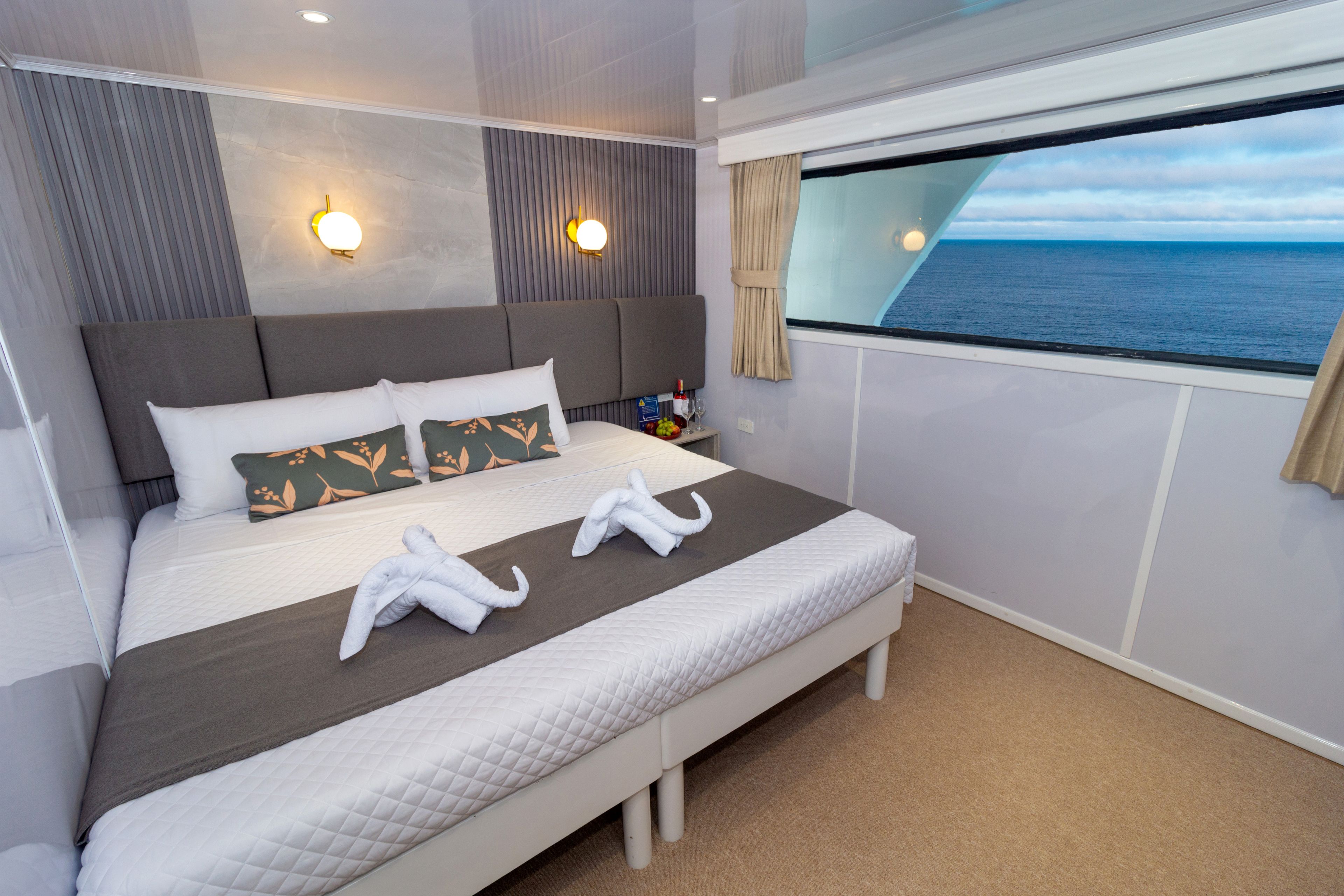 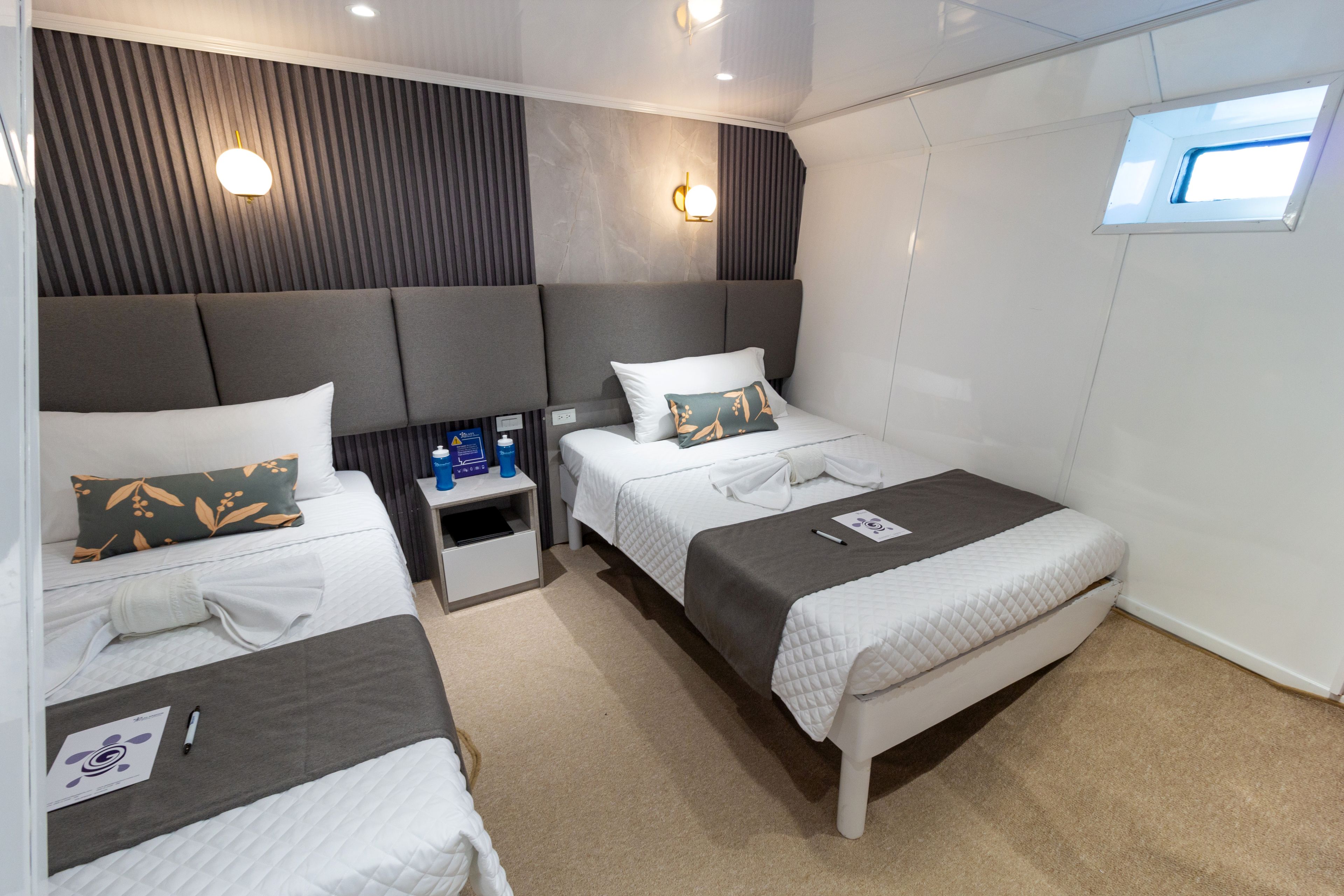 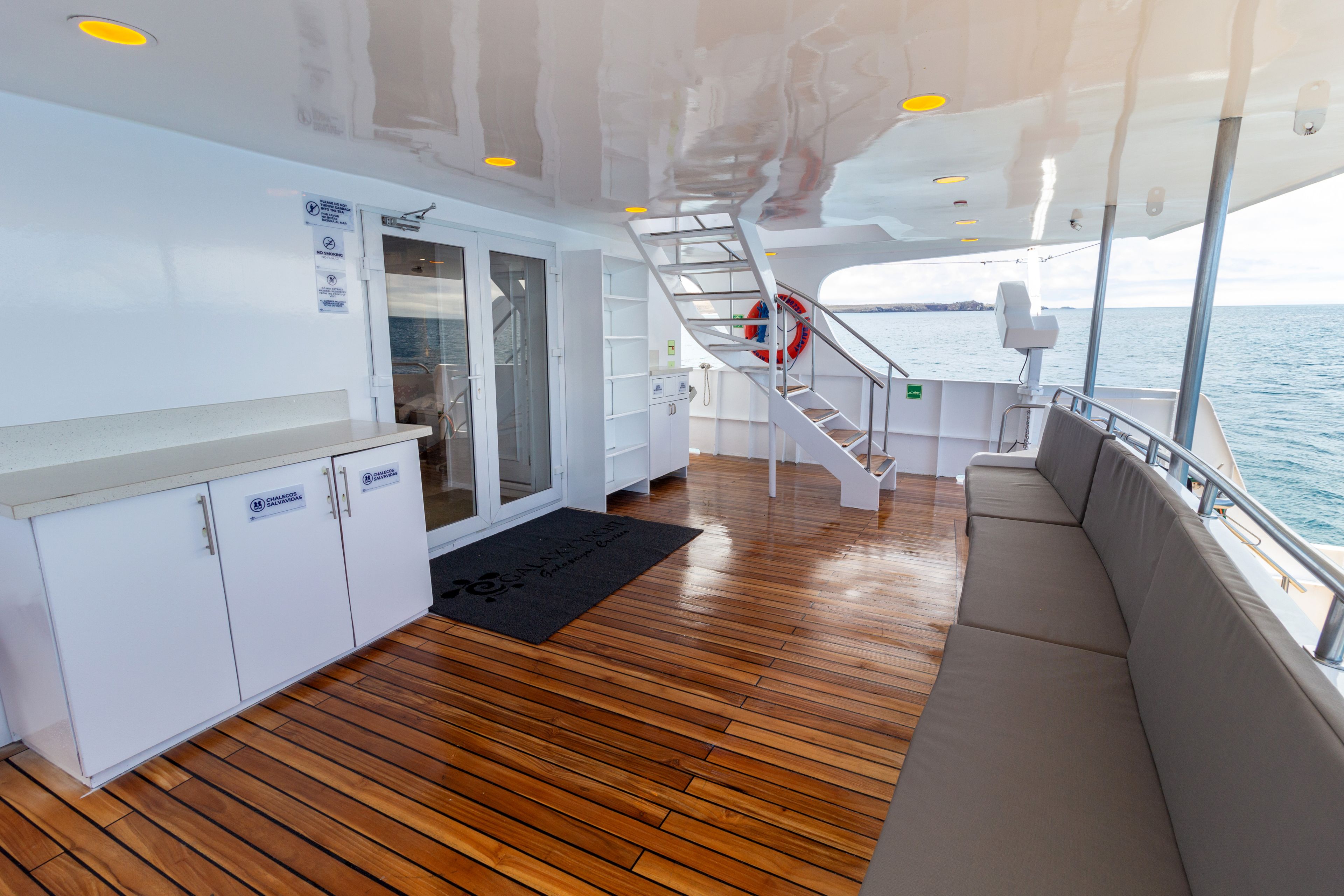 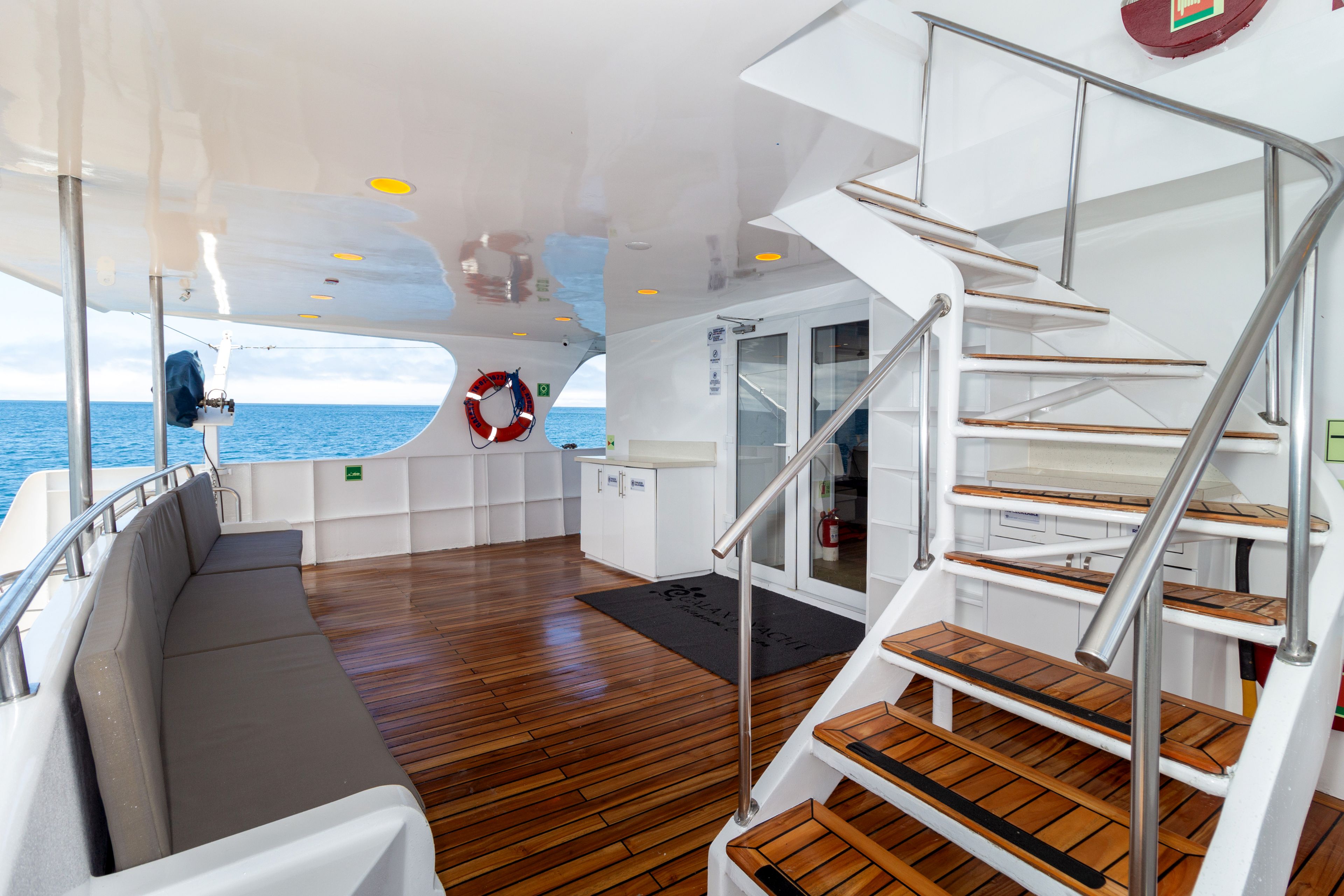 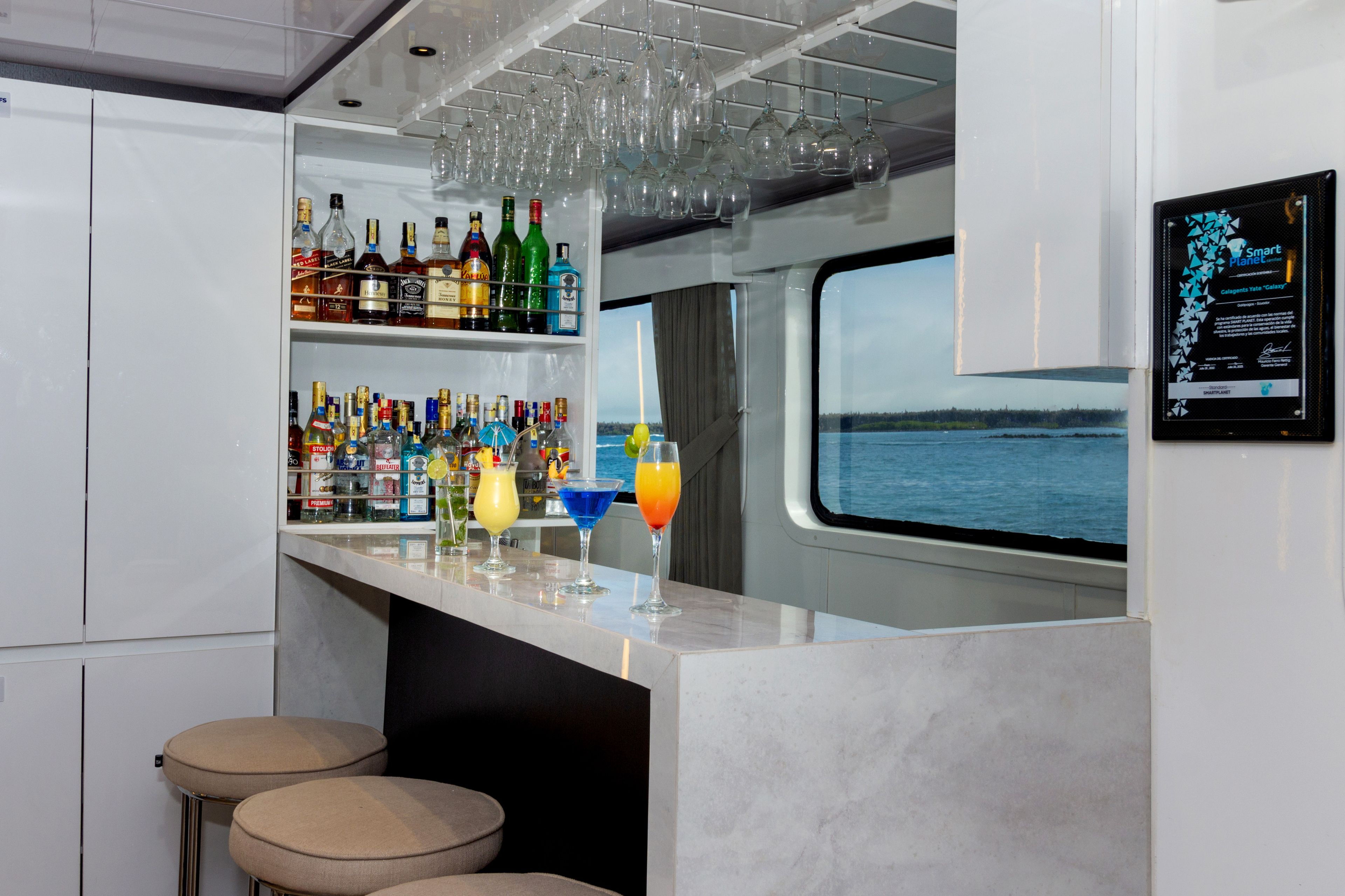 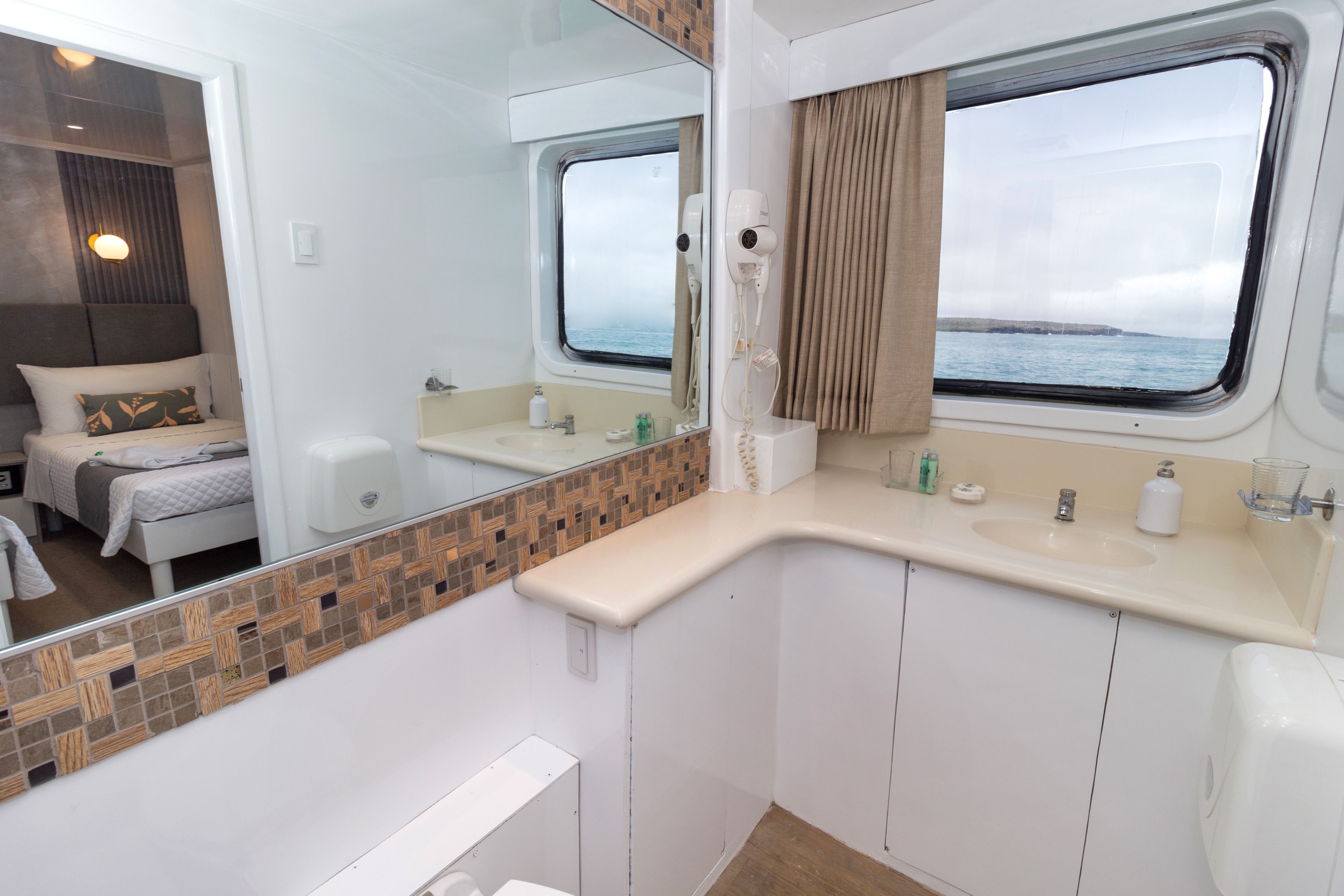 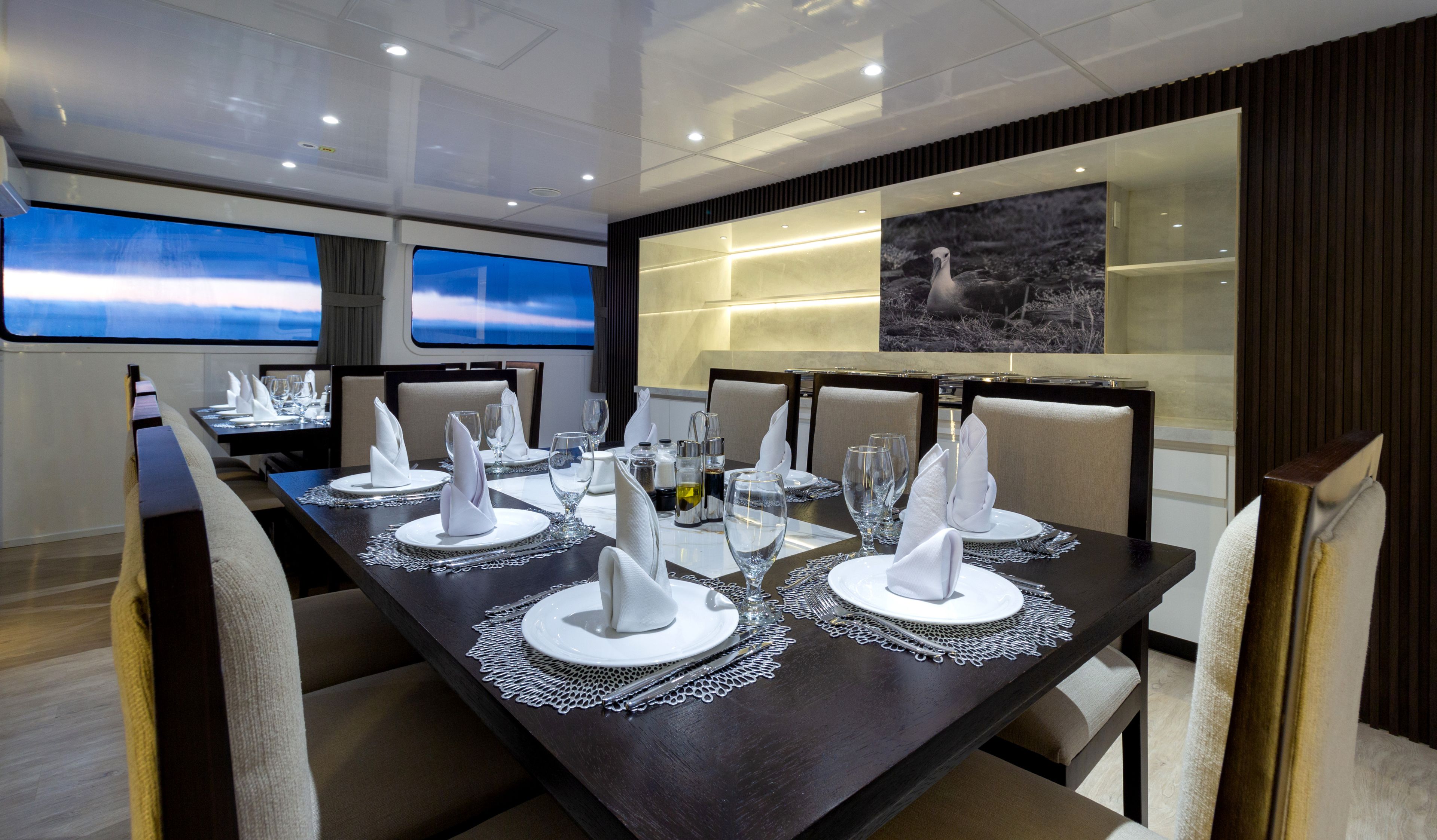 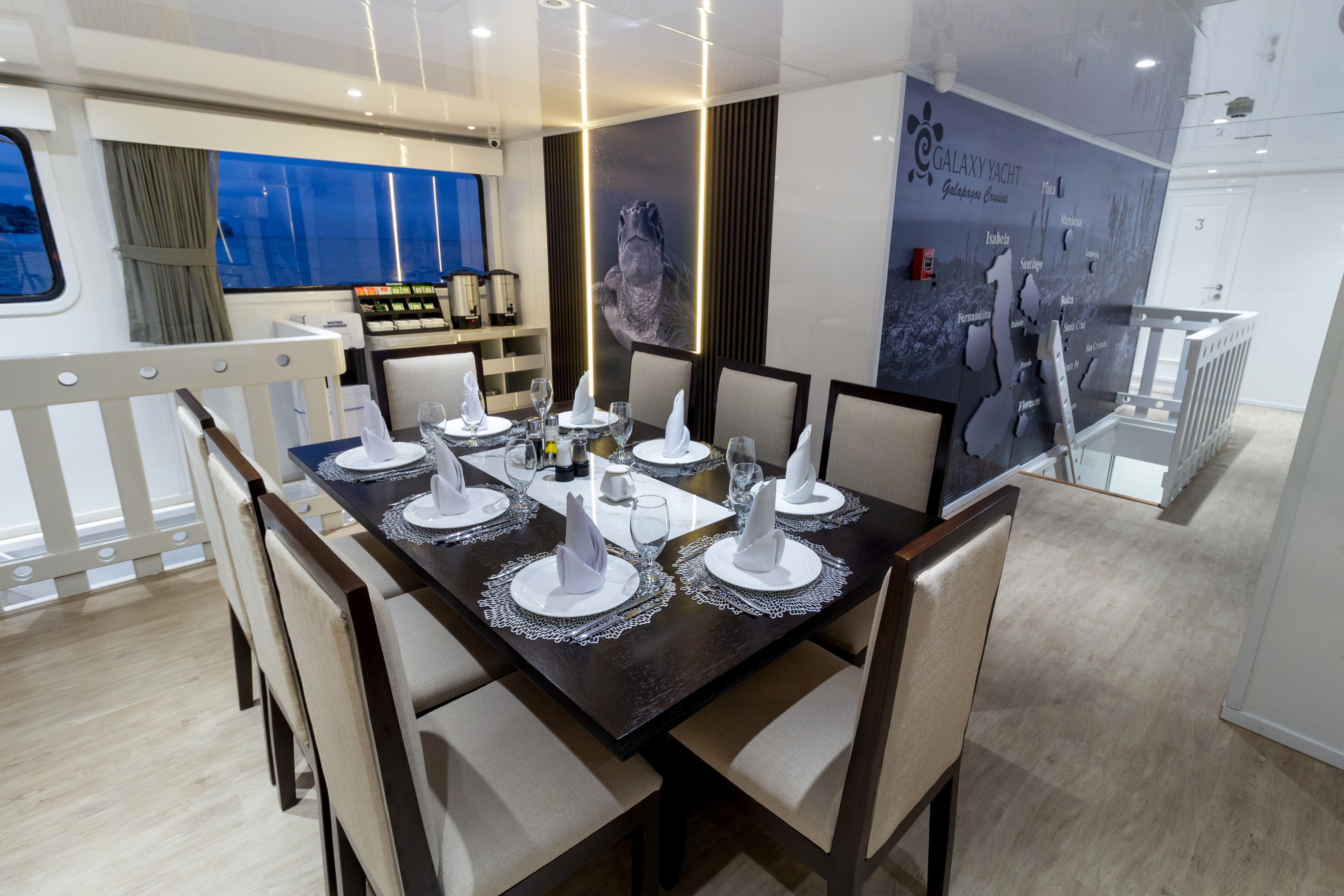 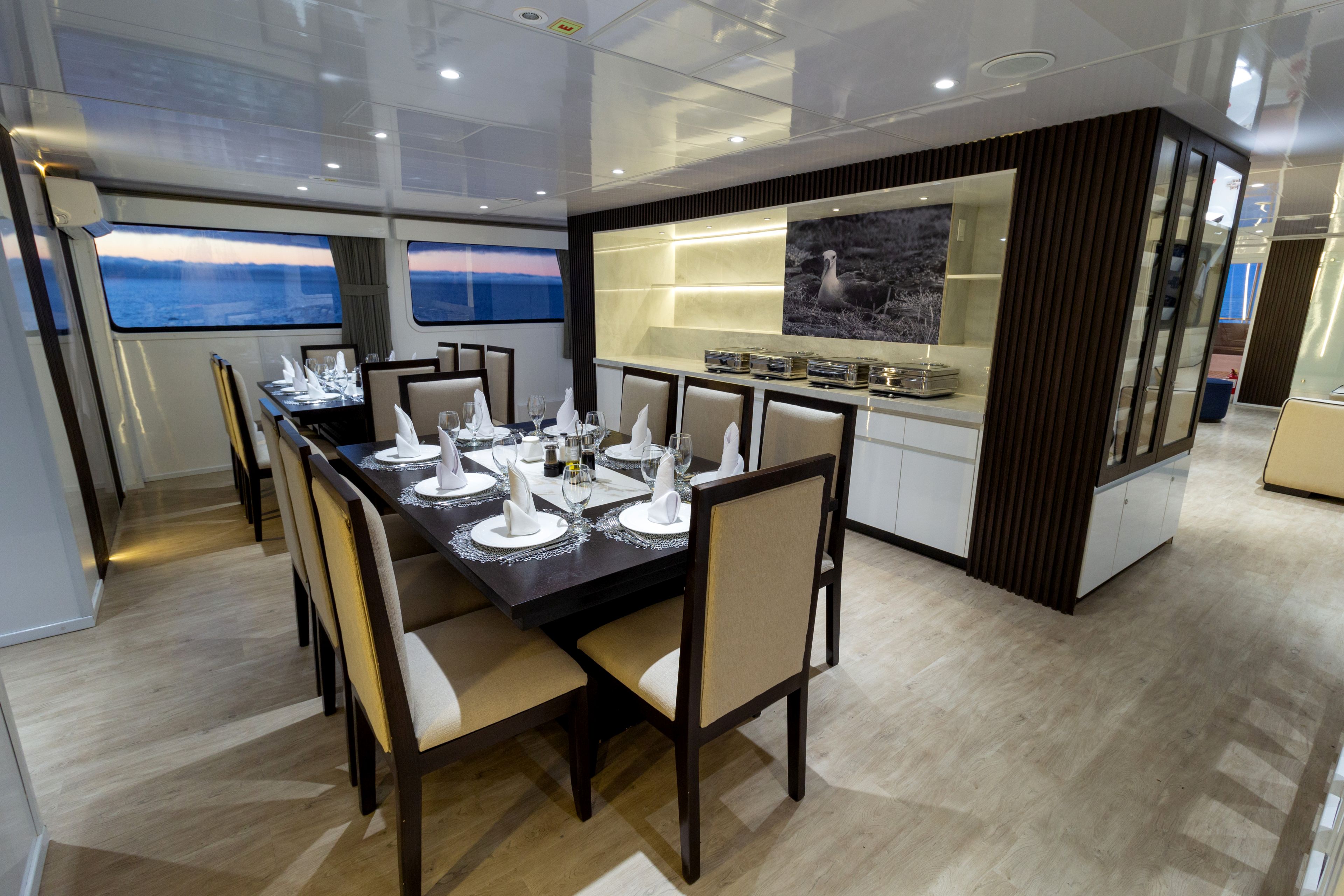 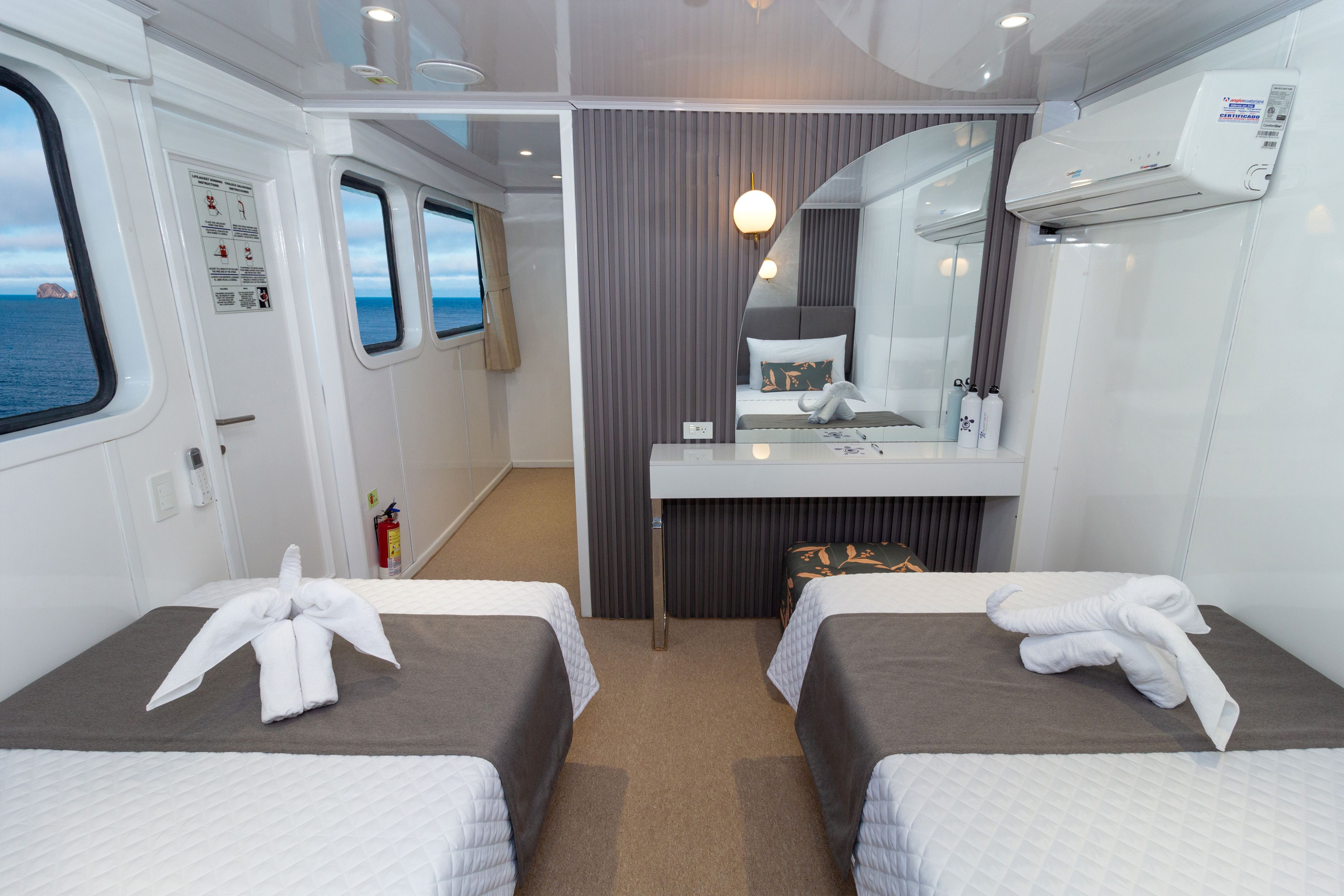 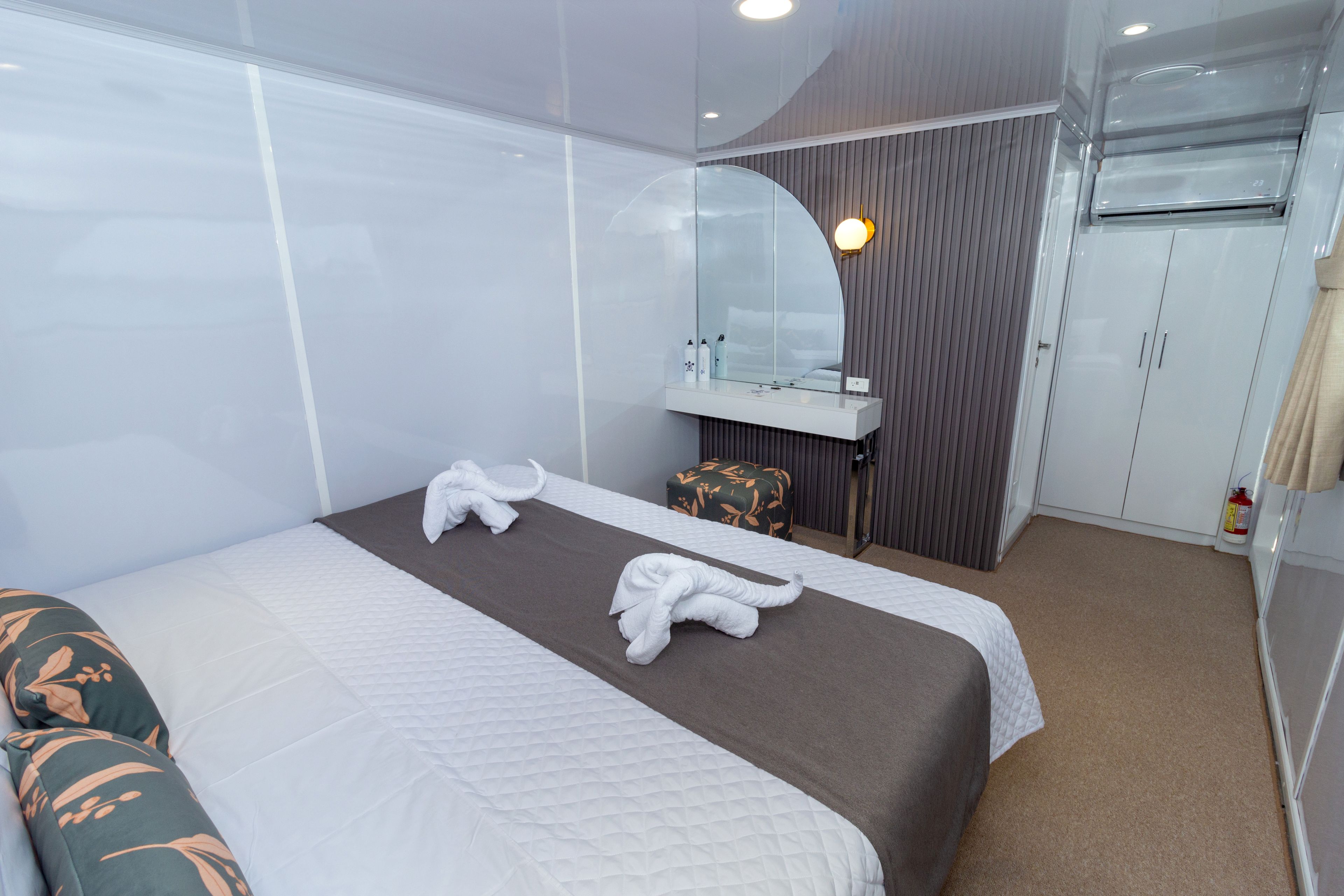 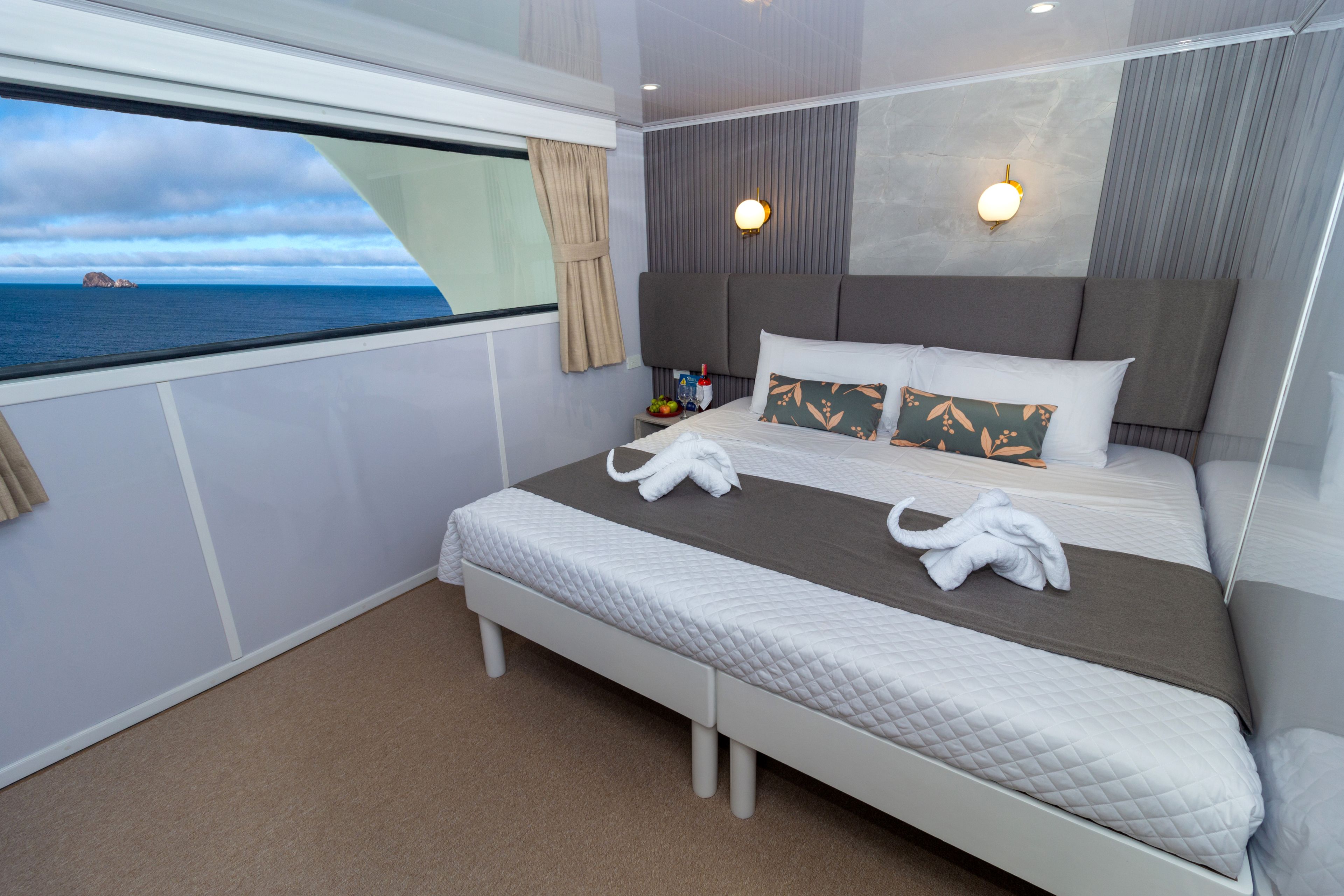 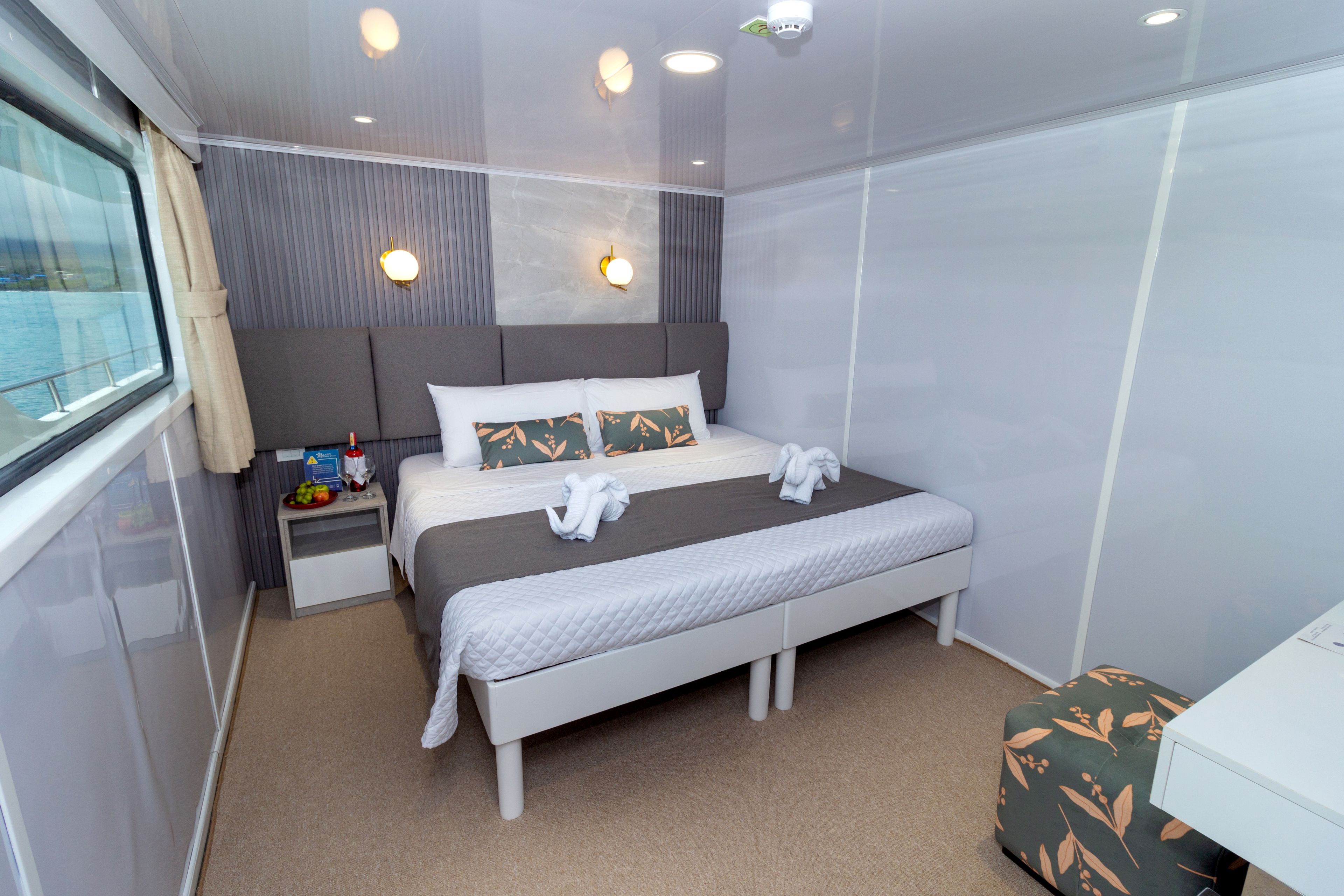 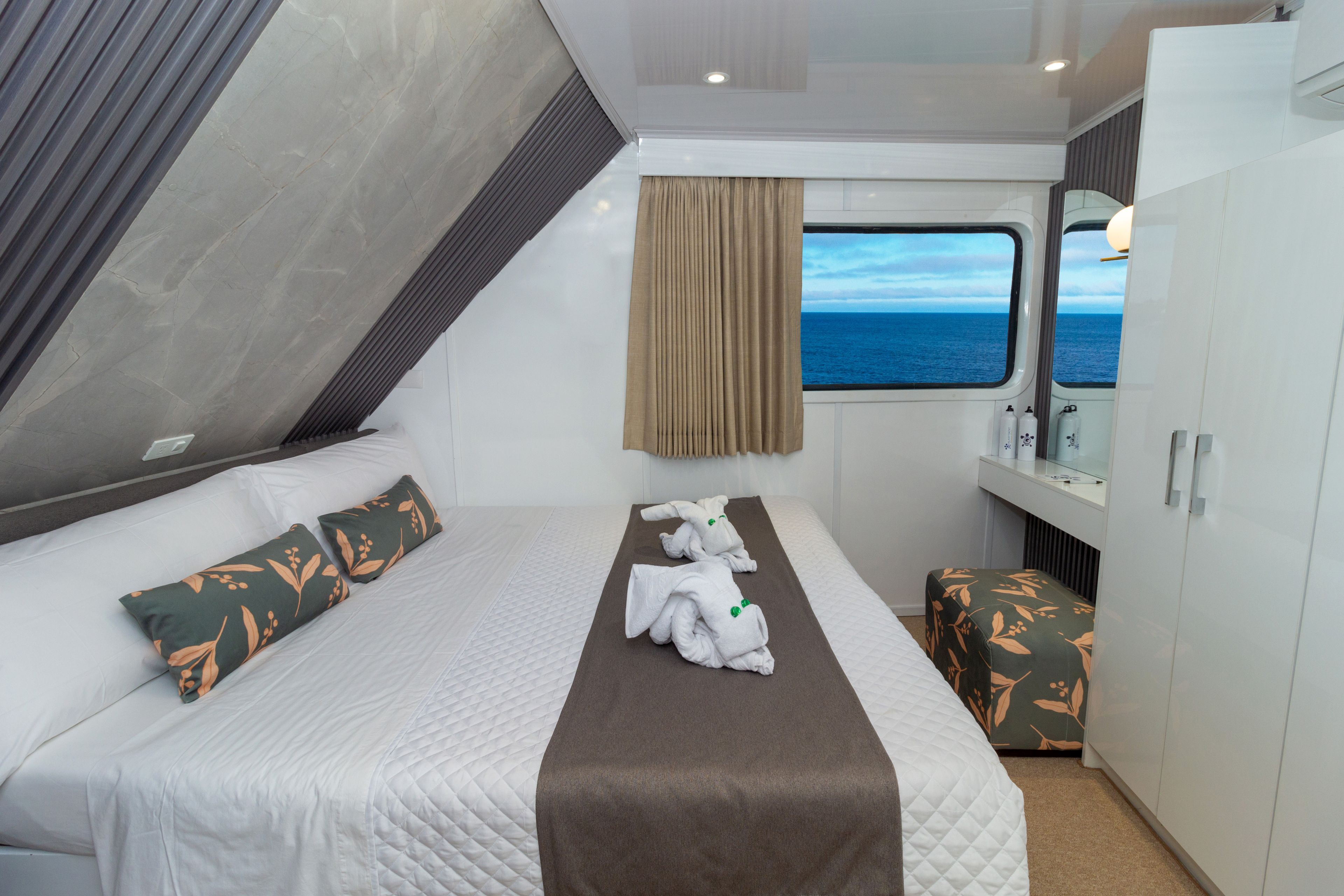 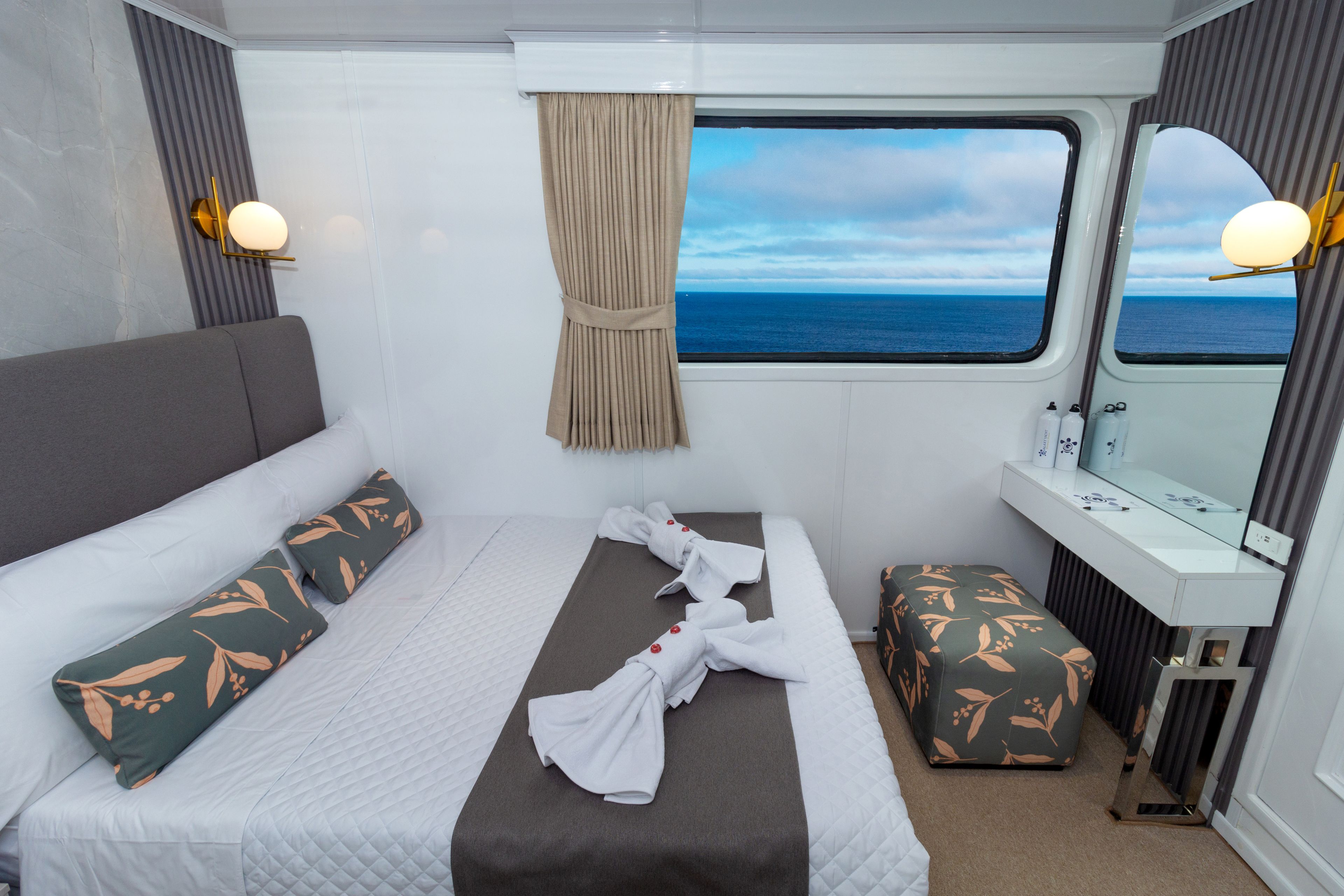 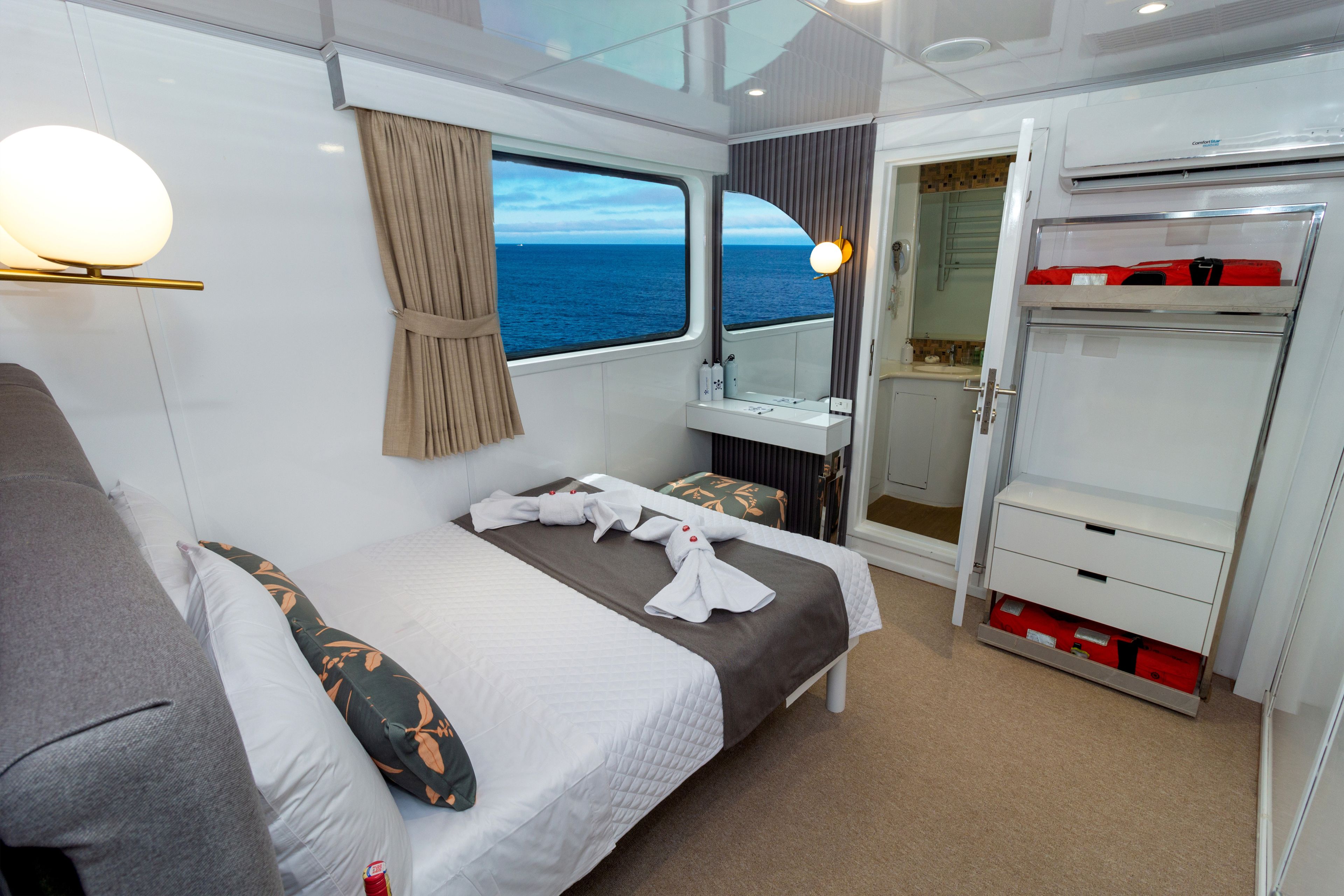 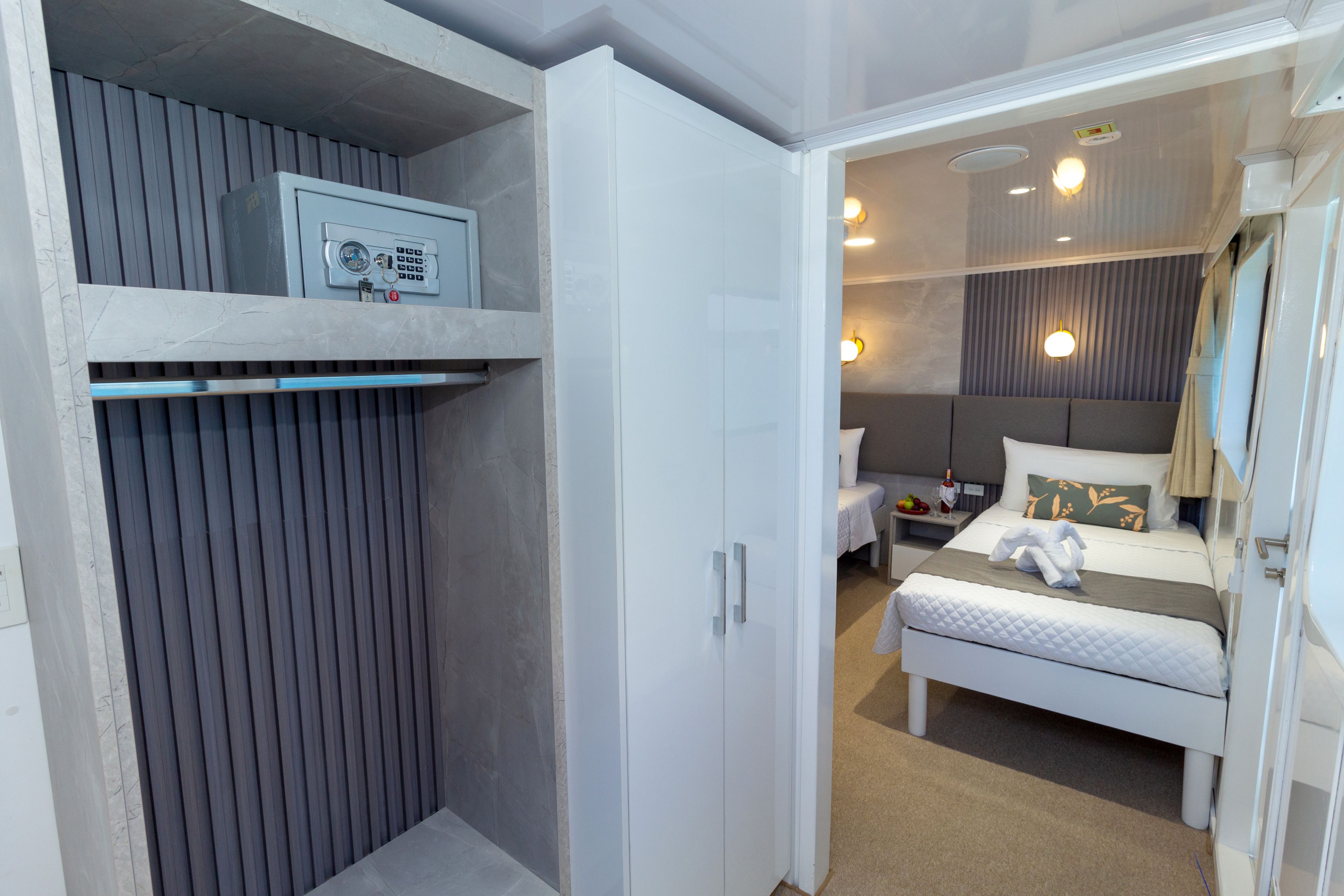 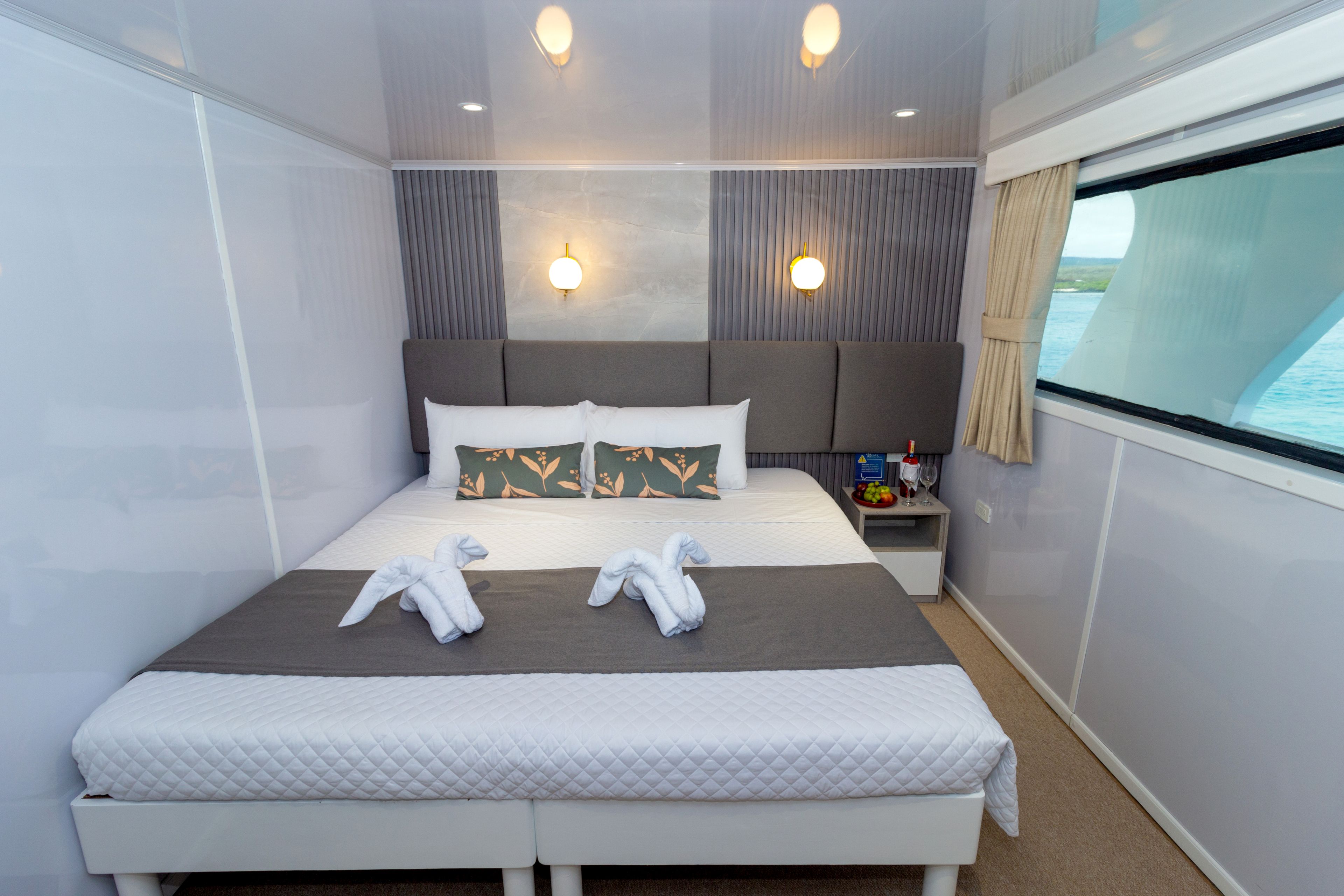 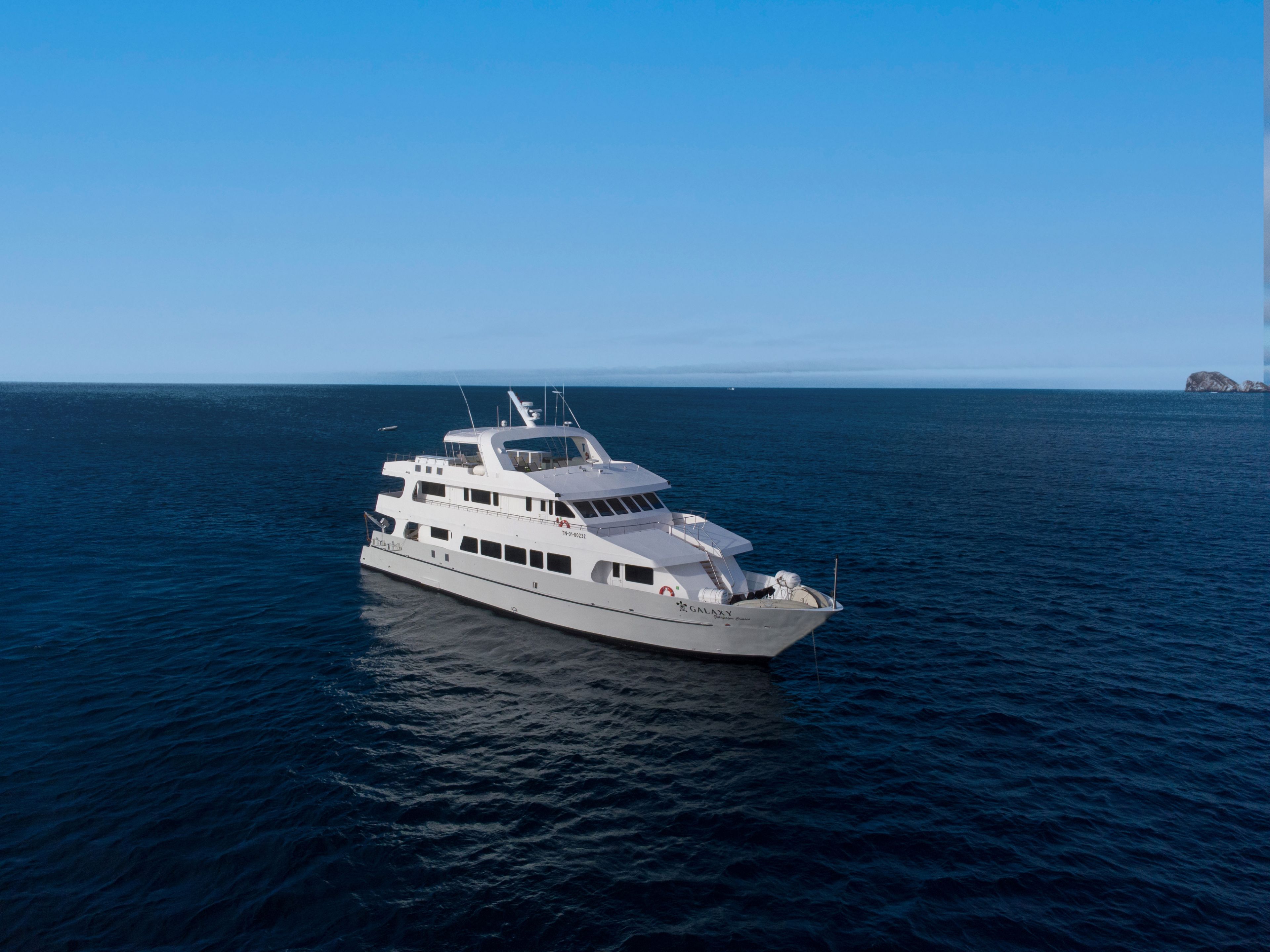 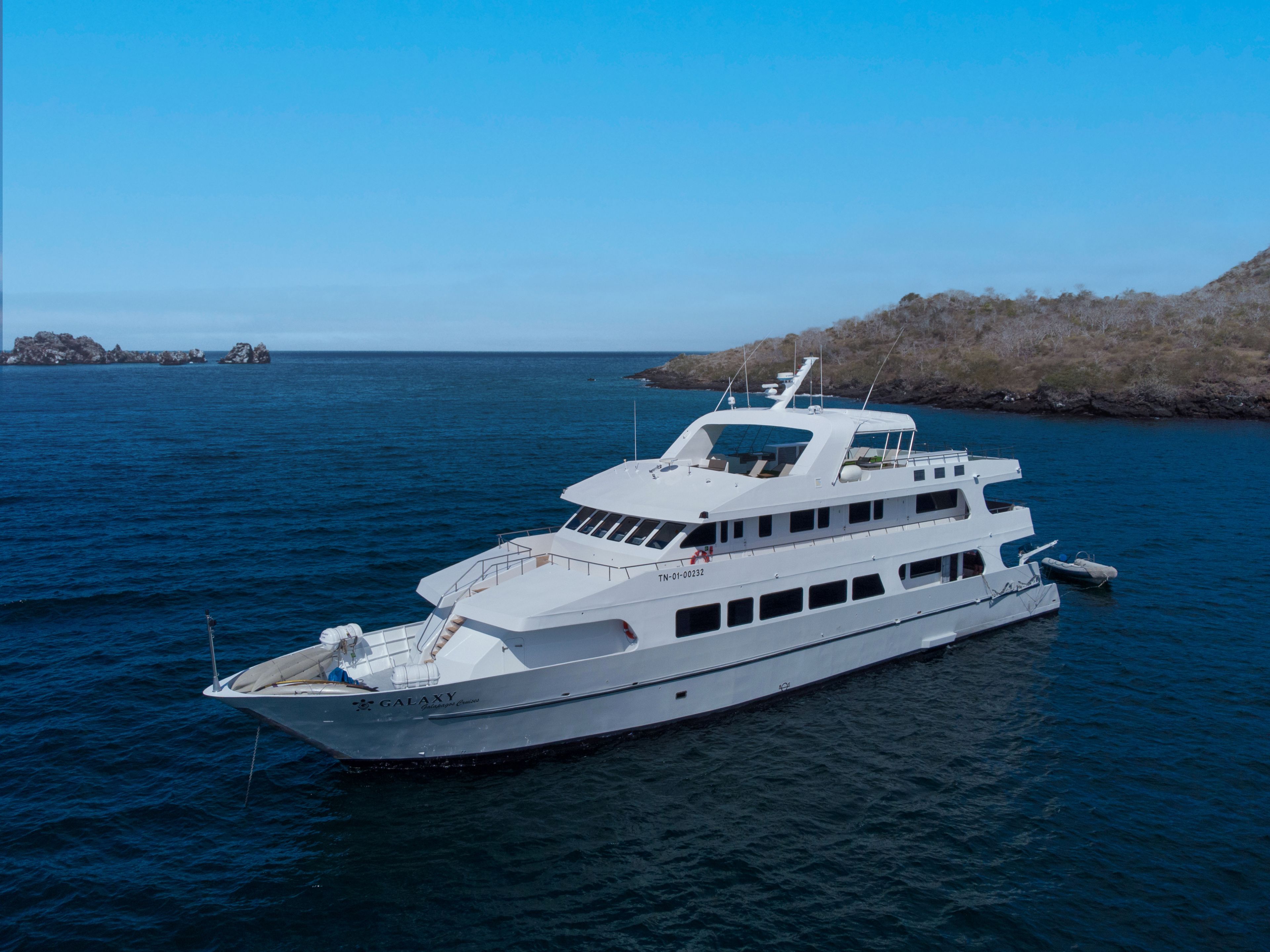 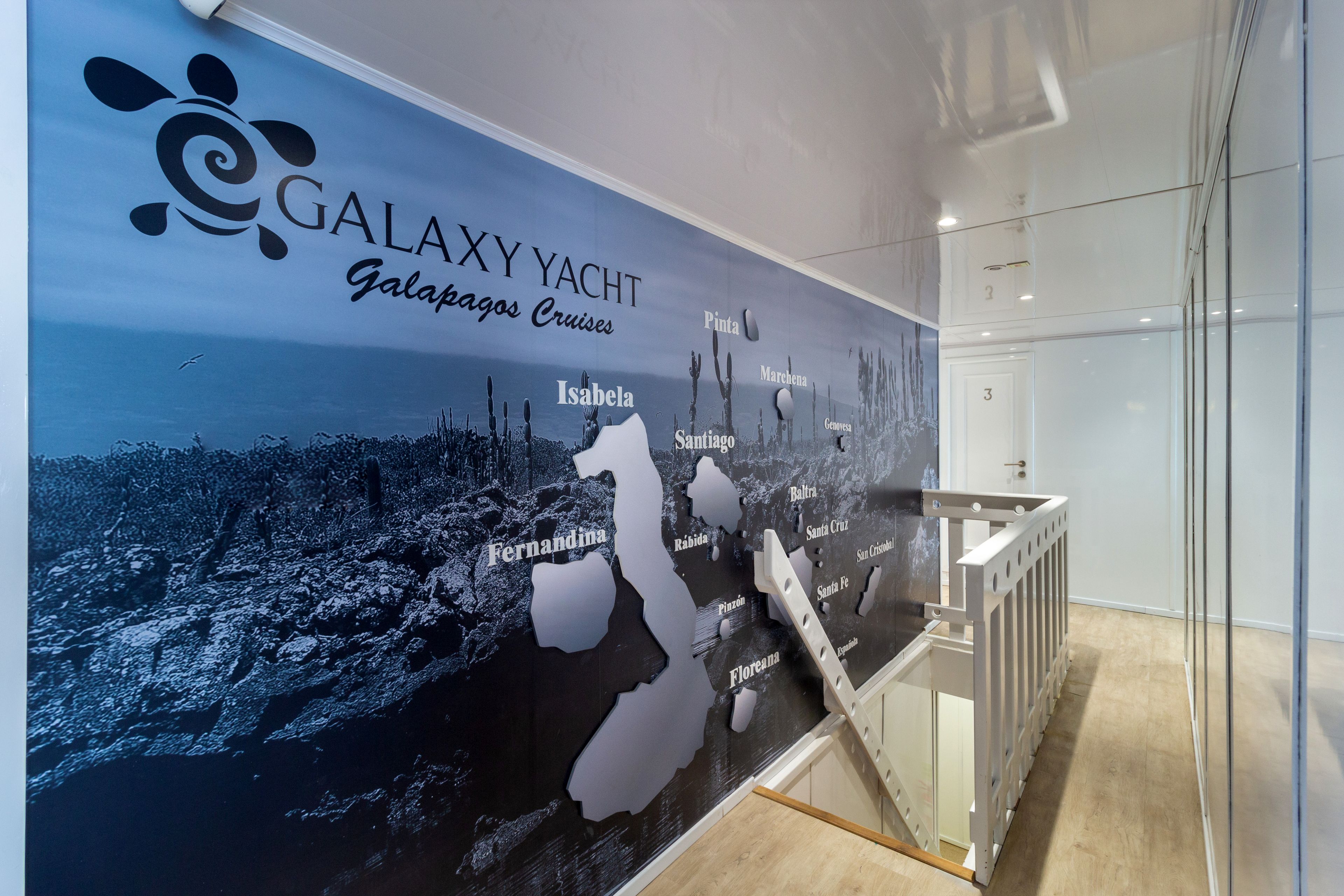 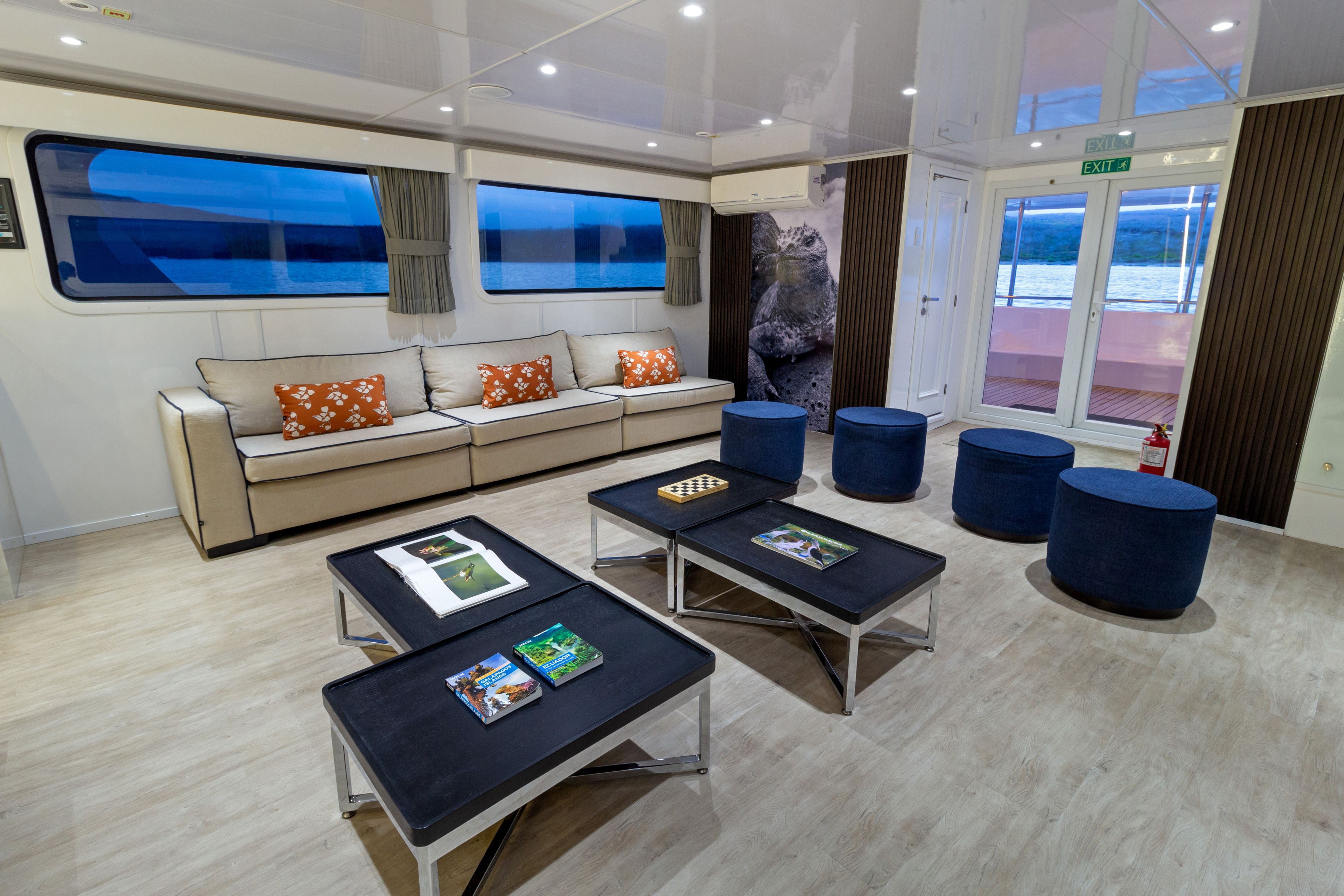 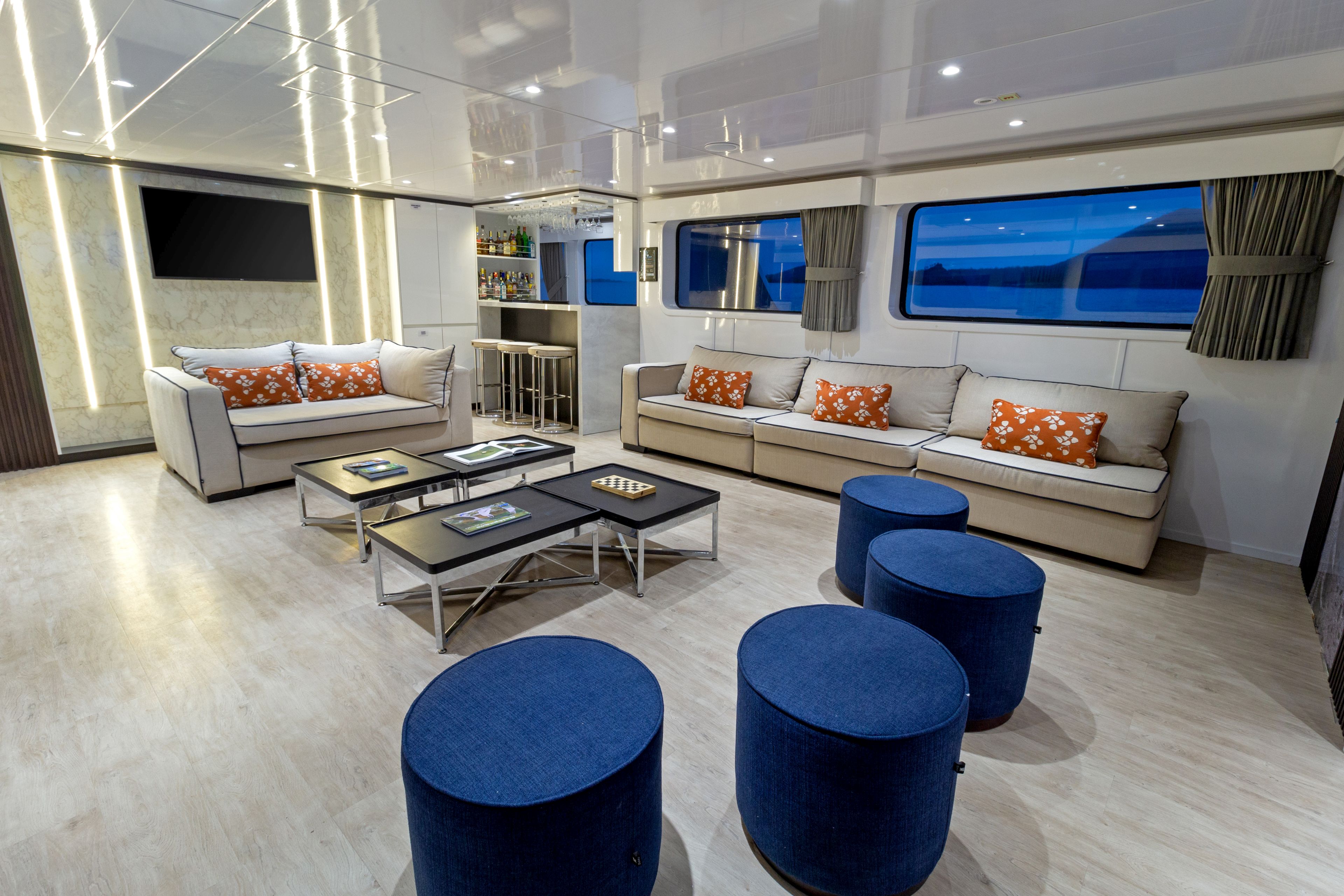 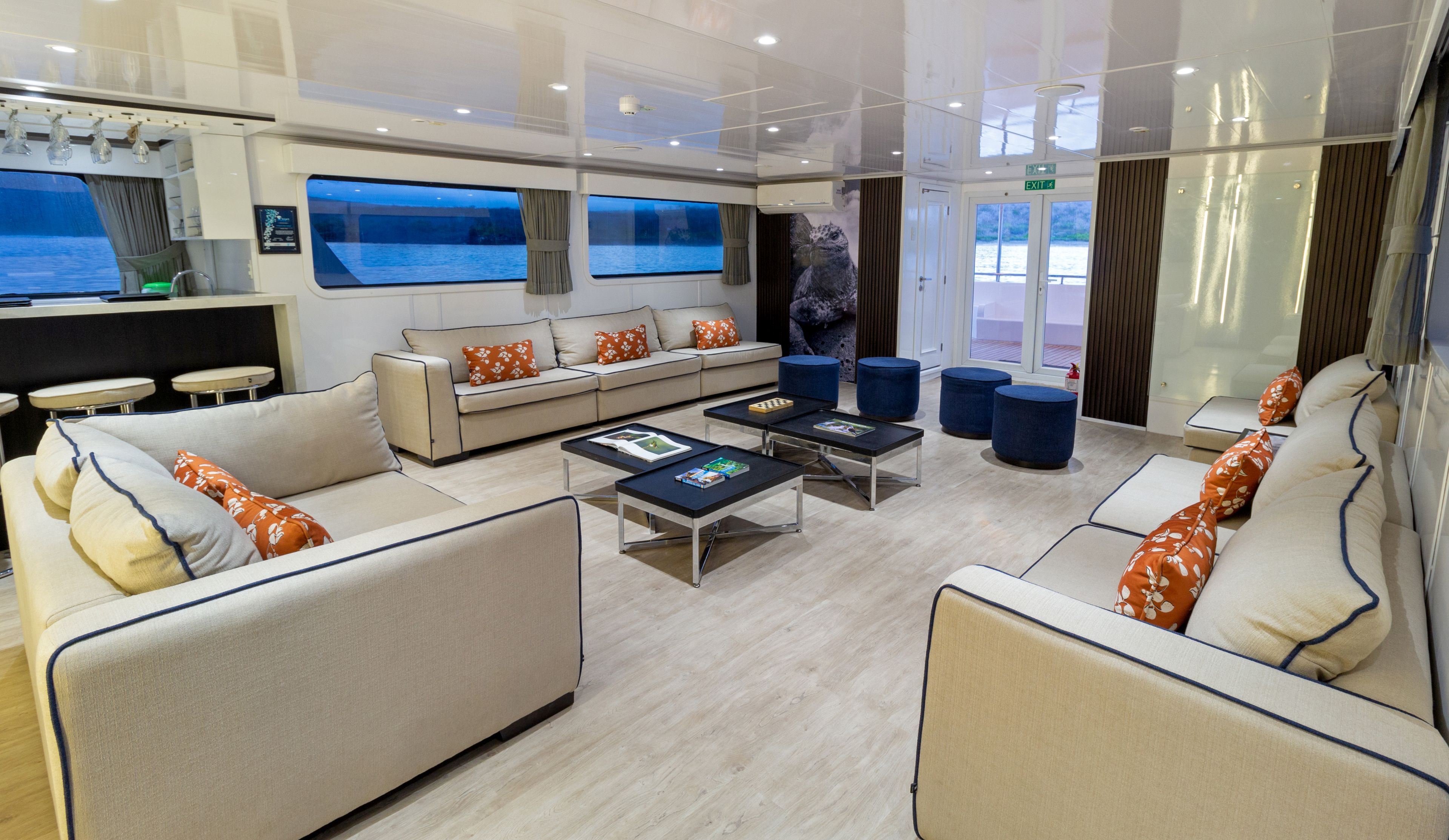 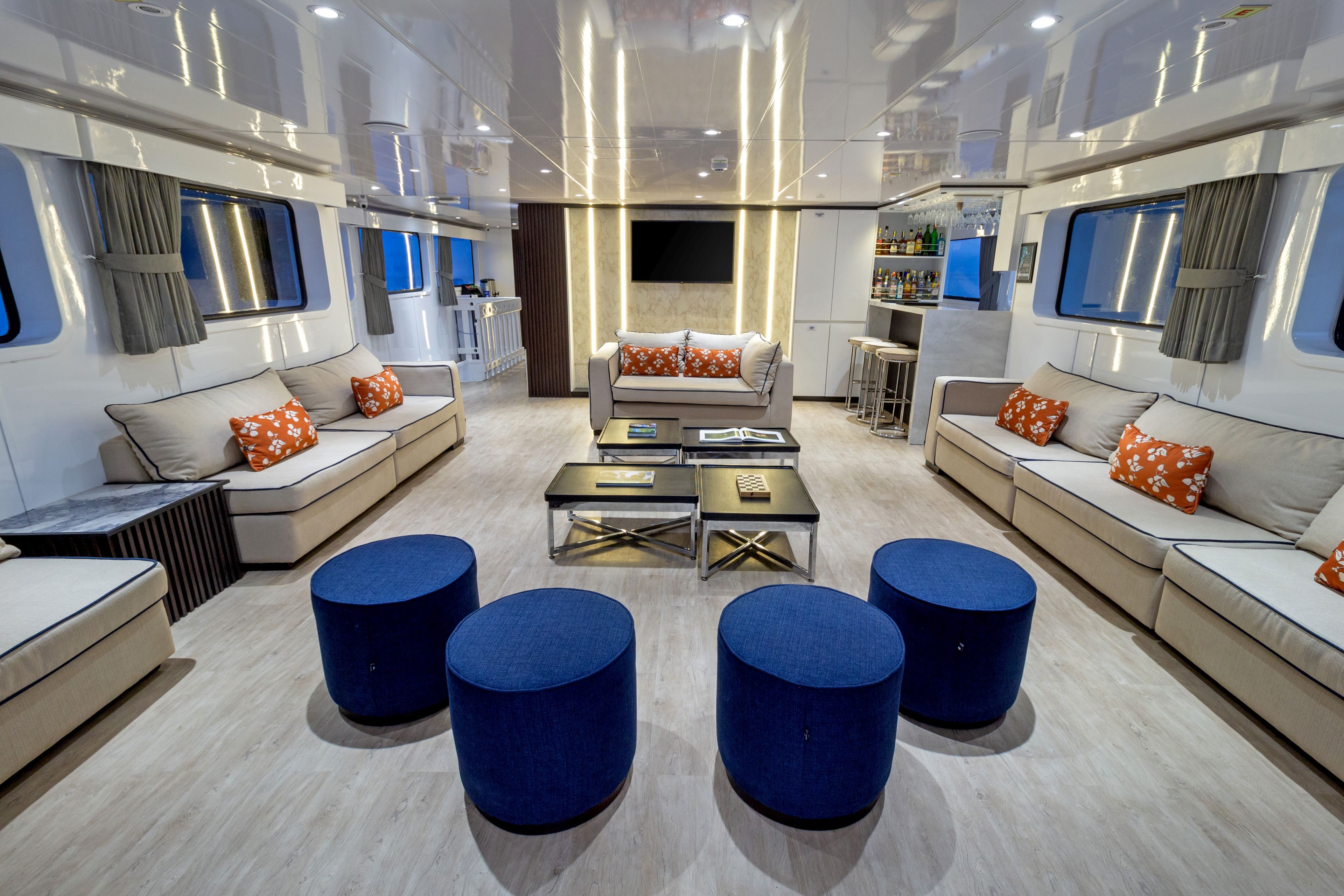 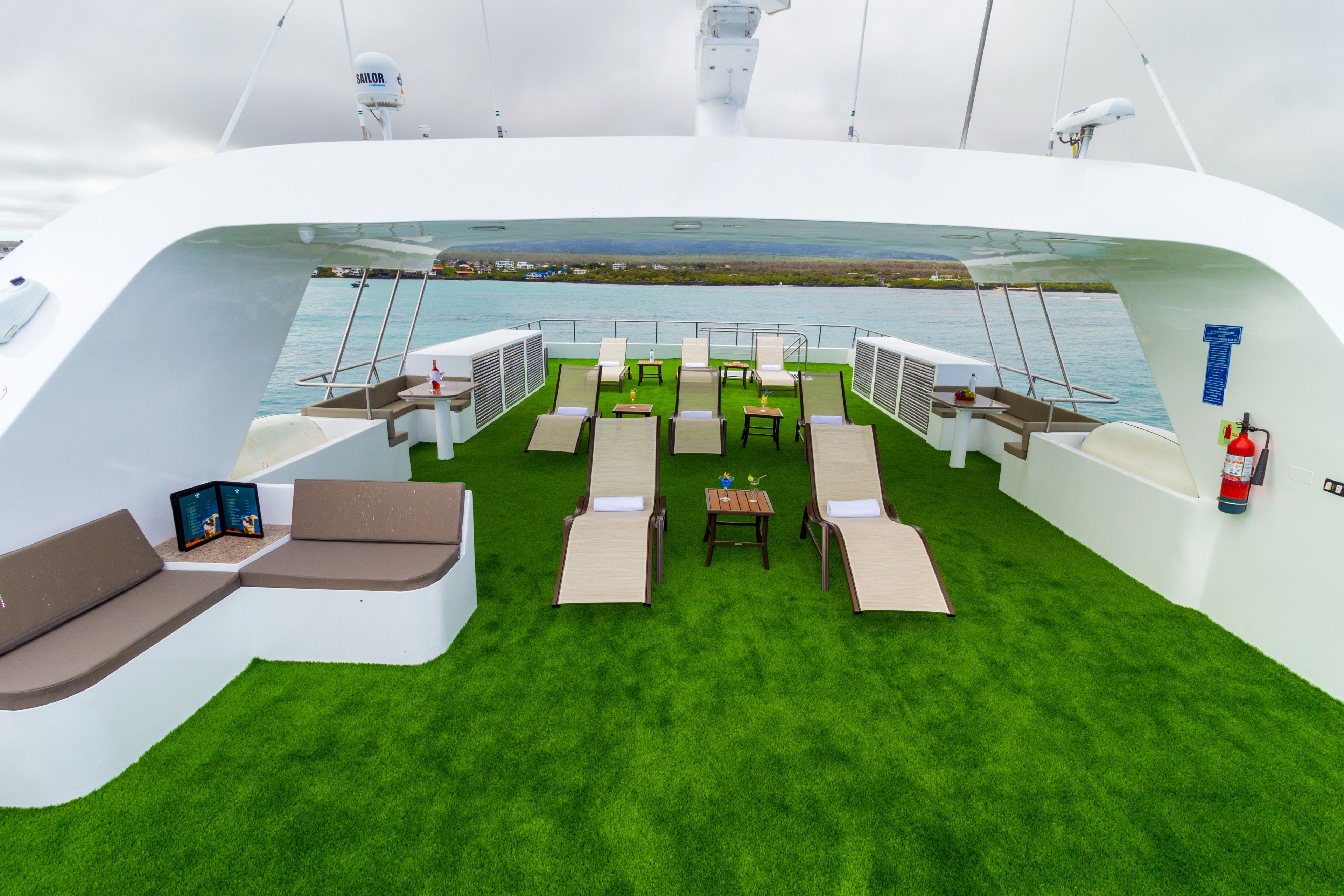 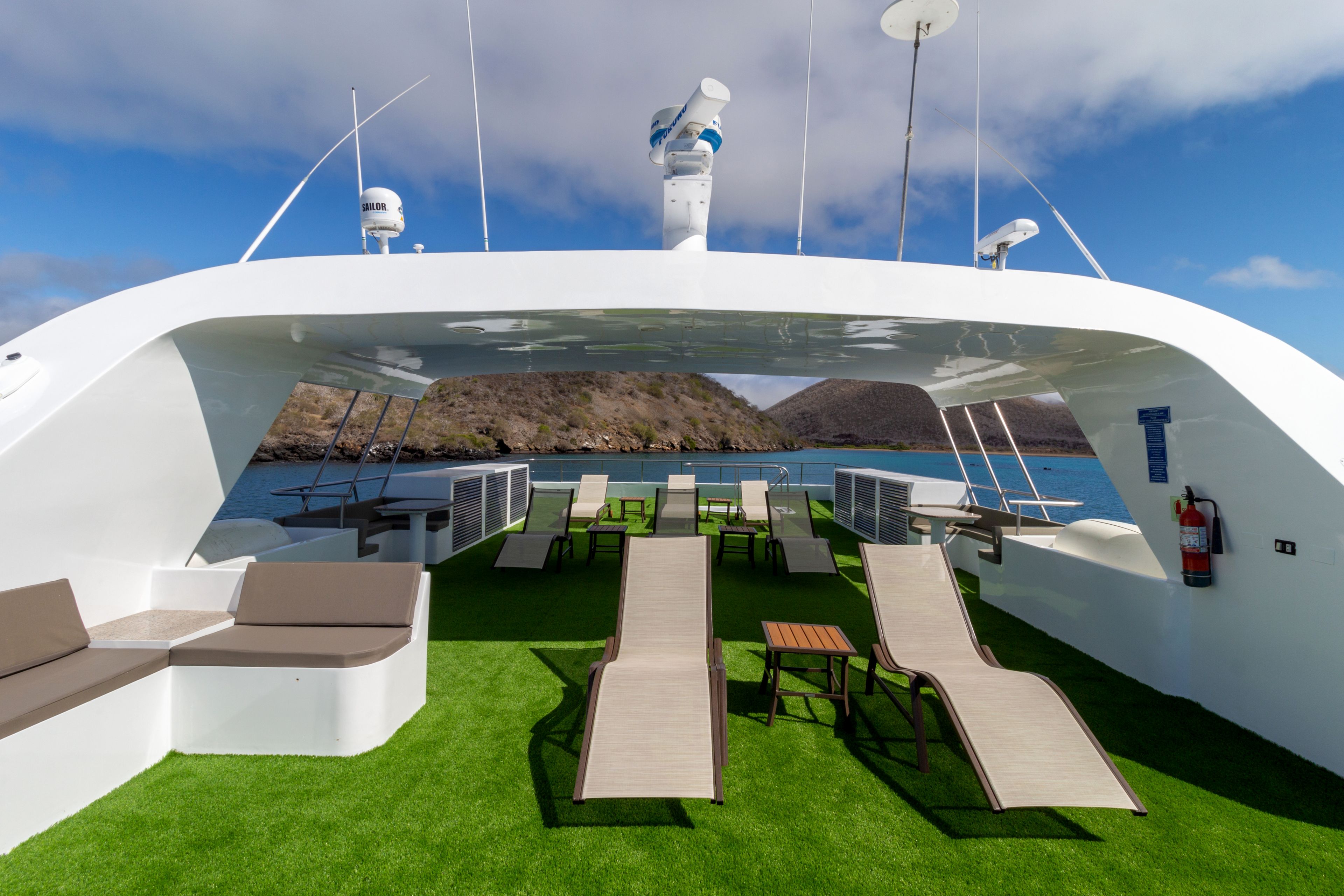 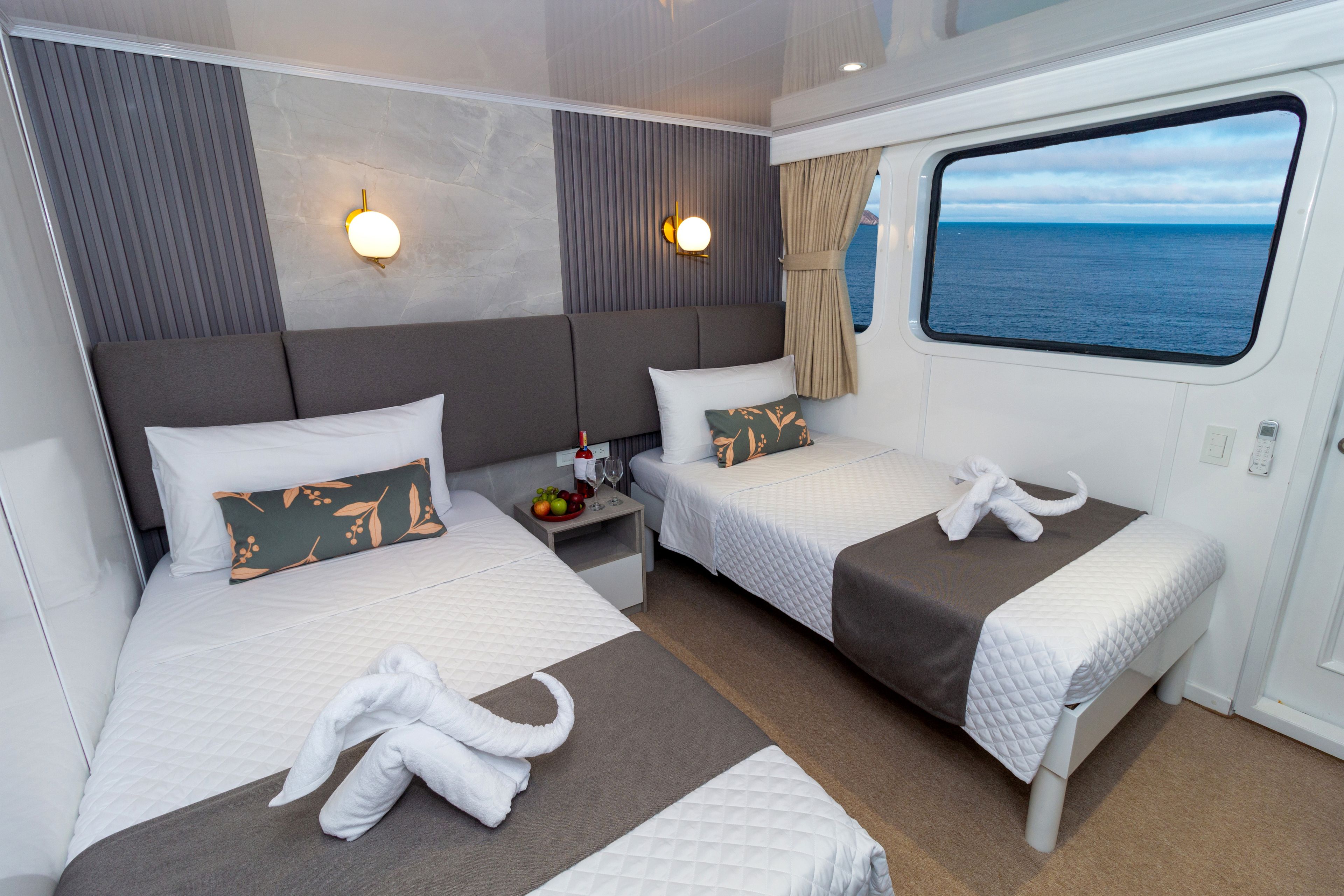 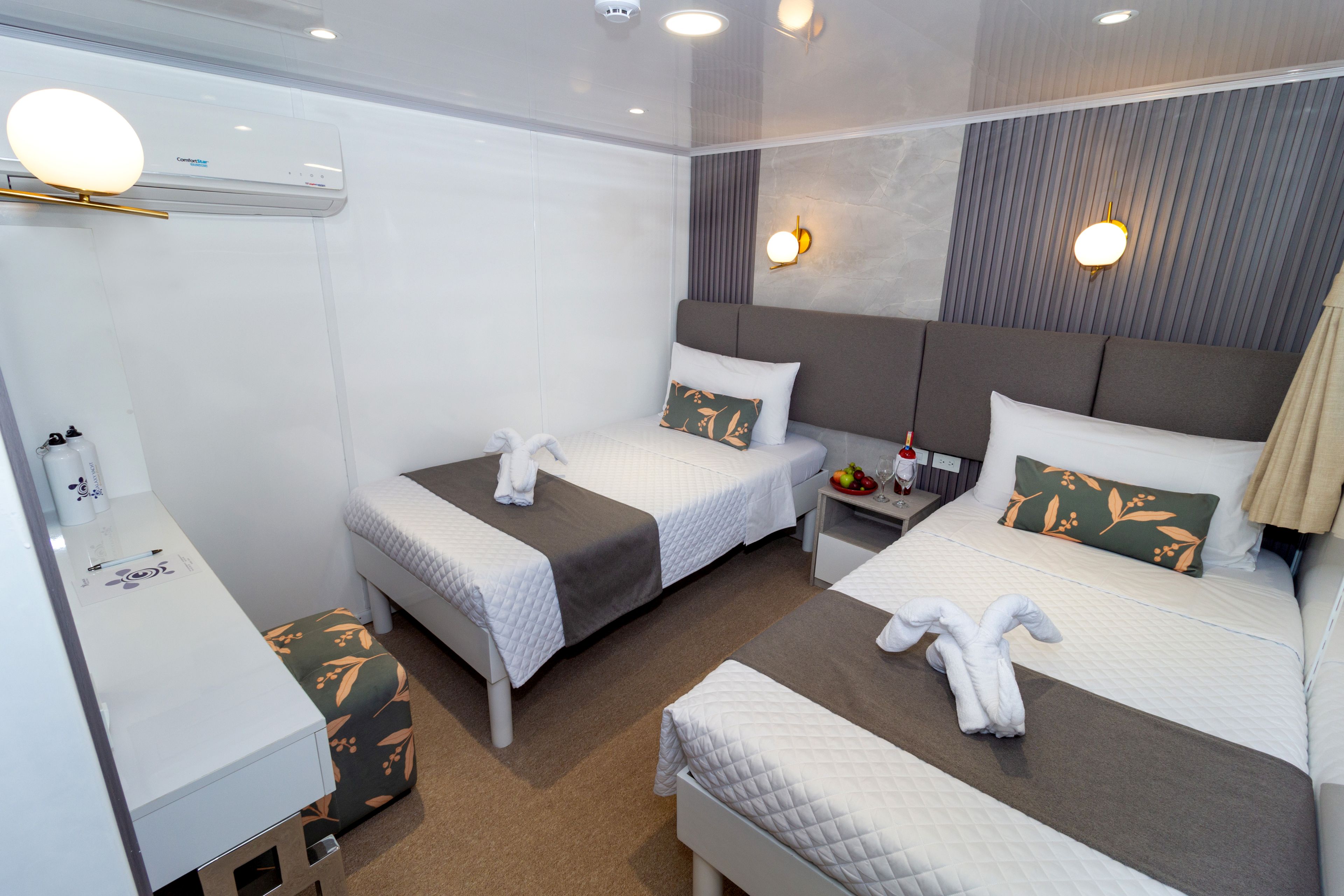 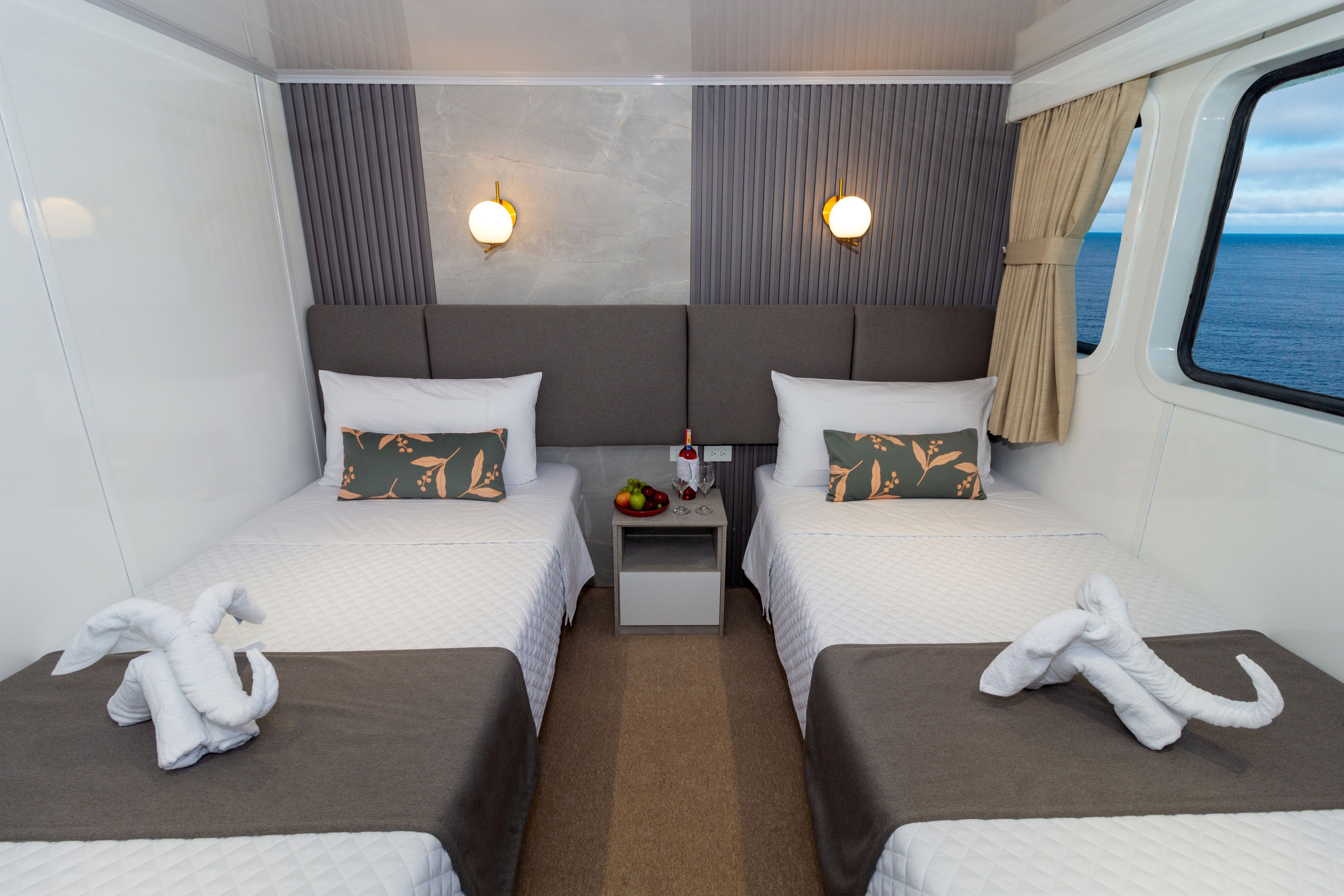 Our Galapagos itineraries offer unforgettable experiences, with our weekly departures that allow you to experience tours of 3, 4, 5, 7 and up to 14 nights that include: full board, two daily guided excursions with optional activities such as snorkeling, kayaking, boat trips which guarantees that your experience in the Galapagos Islands is complete.

DAY 1: SATURDAY
AM: BALTRA AIRPORT
Departure to the Galapagos Islands, arrival at Baltra airport, where our naturalist guide of the National Park will be waiting for you.

PM: HIGHLANDS
Either if you do this visit starting from Baltra or from Puerto Ayora, a bus will take you to the highlands stopping along the way at one of the reserves to visit the lush highland forests where you will look for Galapagos Giant tortoises in their natural environment. This is the best place in the Galapagos to see these gentle giants (reaching over 300 kg / 600 pounds!) casually grazing and resting in freshwater ponds. This is also home for a great diversity of birds rarely found at the lowlands, including finches (tree, woodpecker and vegetarian finches), flycatchers and several species of water birds. You will visit a lava tunnel (depend on the itinerary) and learn how these extraordinary formations where created by ancient volcanic eruptions.

AM: MORENO POINT
Moreno Point is a magical place with extensive lava fields which look lifeless at first sight. Once inland, scattered brackish lagoons form oasis of life where you can find flamingoes, gallinules, ducks and herons. Along the shore we will look for penguins, marine iguanas, flightless cormorants, blue-footed boobies, sea lions, oystercatchers and other shore birds.

Snorkel: We will snorkel to see sea turtles, cormorants and many species of fish. Look carefully in the long seaweeds and you might find a sea horse.

PM: ELIZABETH BAY
Elizabeth Bay is a beautiful sheltered bay surrounded by large mangroves and barren lava fields. There is no trail here so you will take a dinghy tour to explore many channels, pools and coves teeming with life. This is one of the best locations in the islands to see Galapagos penguins, but don’t expect to see thousands of them, as the entire population of the islands is only about 3.000 of them. Flightless cormorants also nest in the area and blue-footed boobies and pelicans often fish in these shallow and rich waters. Rays and sea turtles are also very abundant.

AM: URBINA BAY
This place is known for the dramatic uplifting that happened here during the 1950’s. A large portion of the coast was pushed up, exposing many hectares of previously submerged land. Look carefully along the trail and you will find small shells and corals, a proof that the area was underwater more than sixty years ago. The trail will give the opportunity to see land iguanas and, during certain seasons, giant tortoises. Galapagos hawks nest in the area and are often seen flying or perched on the trees.

Snorkel: You can snorkel from the beach to see sea turtles, cormorants and penguins. Fish are also abundant in the area.

PM: TAGUS COVE
Tagus cove is one of the places Charles Darwin visited during his exploration of the Galapagos islands. A trail will take you through a dry Palo Santo forests where you can see Darwin finches and mockingbirds. You will get great views of Darwin’s lake and the large volcanos of northern Isabela.

A boat tour along the shore will give you chances to see penguins, cormorants, marine iguanas and a very unique species: the Galapagos martin, a small endemic bird which is one of the most endangered species on the island.

Snorkel: The nutrient-rich waters around Tagus Cove attracts a lot of sea turtles and a great diversity of fish, but also penguins, who feast on large schools of anchovies. It is common to see cormorants underwater as they chase fish through the reef.

AM: ESPINOZA POINT
Located at the base of an imposing volcano (the most active in the Galapagos islands) this site is one of the jewels of the Galapagos National Park. As soon as you disembark you will be surrounded by hundreds of marine iguanas, as this is the largest colony for the species. Sea lions bask in the beaches while their pups play in tide pools. Along the shore you will see   flightless cormorants, which are restricted to the western areas of the archipelago. Surrounded by cold plankton-rich waters, Punta Espinosa is home for an array of species, including herons, pelicans, oystercatchers, sea turtles, shorebird and many more. Look up in the mangroves as Galapagos hawks often perch to look for their prey.

Snorkel: The nutrient-rich waters around Punta Espinosa attracts great numbers and diversity of fish and sea turtles.  Seaweeds are also abundant, making this place the best for seeing marine iguanas feeding underwater.  Following a cormorant underwater as it chases fish through the reef is one on the most amazing snorkel experiences you may have on your trip.

PM: ALBEMARLE POINT
This place is great for wildlife as well as an historical site. During WWII, the Americans built a radar base in order to detect the presence of Japanese war ships approaching the Galapagos. You can still see a few remains of the radar. The area is barren and surrounded by endless lava fields, but along the coast you will find some of the largest marine iguanas in the islands, Galapagos penguins, flightless cormorants and shorebirds.

Snorkel: A couple of sheltered coves offer great opportunities to snorkel to look for cormorants, penguins and many species of fish.

AM: EGAS PORT
Despite its name, there is no “port” at Puerto Egas, but you might see a few remains of the last attempts to colonize the island during the 60’s.  The trail goes along the coastline which is rich in wildlife, with marine iguanas basking in the sun everywhere, Galapagos sea lions, herons, oystercatchers and many shorebirds. At the end of the trail an area called “the grottos” is home for a small colony of the endemic Galapagos fur seal, much more difficult to see at close range than its cousin.  As recently as 2019, land iguanas where re-introduced to the area, so look around for these impressive reptiles which where extinct from Santiago for over a century.

Snorkel: You can snorkel from the beach and explore an area of rocky bottoms which is excellent for fish, turtles and reef sharks. Often, sea lions are also present and are happy to interact with divers.

PM: ESPUMILLA BEACH / BUCCANEER COVE
Espumilla is a beautiful 1km (0,6 mi) long beach with rusty-brown sand, located in the northern coast of Santiago. It is surrounded by large mangrove trees and a very interesting native dry forest, which is home to Galapagos hawks but also a great diversity of finches, mockingbirds and doves. Don’t forget to check the salt pan, as during the rainy season there could be flamingoes and ducks.

This site gets its name because it was used by pirates and buccaneers during the XVII and XVIII centuries as a place to hide and get freshwater and tortoises. The place is very scenic with beautiful cliffs and interesting rock formations. There is no trail, but here you will take a dinghy to look at wildlife from the small boats.

Snorkel: You can snorkel in a sheltered bay which is teaming with underwater wildlife including large schools of fish (angelfish, puffers, parrotfish, snappers, grunts…) but also reek sharks, sea lions and sea turtles.

AM: DRAGON HILL
Located in the northern coast of Santa Cruz, Dragon hill gets its name from the land iguanas that inhabit this area, the only location in the whole island of Santa Cruz where you can see this large species of reptiles. Thanks to a very successful breeding program, this population of land iguanas, which was in the brink of extinction during the 70’s and 80’s, has rapidly recovered. There is also a small salt water lagoon where we can often see flamingoes, ducks, stilts, sandpipers and other shorebirds.

Snorkel: After the hike, you will have the option to snorkel in shallow sheltered water where you will see large schools of surgeonfish and parrotfish, as well as reef sharks, rays and a large diversity of tropical fish.

PM: BLACK TURTLE COVE
Black Turtle Cove gets its name from the abundance of green see turtles, locally known as: “tortugas negras”. There is no landing here so you will be doing a boat tour on the dinghies, exploring shallow channels and small coves surrounded by beautiful mangrove forests. Reef sharks, sea turtles and several species rays inhabit this beautiful area which is considered an important mating area for turtles and a nursery for several species of sharks. Herons, pelicans and boobies are also common here as they prey in schools of anchovies.

AM: RABIDA
Rábida is a small island famous for its reddish lava rocks (rich in iron) which gives it a unique look. The beach is also red and hosts a small colony of sea lions. There is a small salt water lagoon where we will see ducks and stilts and sometimes flamingoes. The trail will take you inland to get beautiful views of the beach and the lagoon. Look for Darwin finches, flycatchers and mockingbirds. In the cliffs along the coast you can find Nazca & blue-footed boobies, brown noddy, herons and the two species of sea lions: Galapagos and fur seals.

Snorkel: You can snorkel from the beach and explore a sheltered rocky area, which is excellent for fish, sea lions and reef sharks. Look at the high diversity of small invertebrates attached to the vertical walls.

PM: CHINESE HAT
This small islet is formed by a volcanic cone with a perfect symmetrical shape. It is separated from Santiago by a narrow channel forming one of the most beautiful bays in the islands. Blue-turquoise water and coral sand beaches surrounded by dark lava rocks gives this area a real tropical character, which makes even more surprising finding penguins resting in the rocks.  The trail goes along the shore, taking you through a small colony of sea lions.

Snorkel: When you swim in this place you will get mesmerized by the incredible colors of the fish and the sleek silhouette of reef sharks and, it is not uncommon to see a penguin darting through the water chasing anchovies like a small torpedo.

AM: SEYMOUR
This island is home for large colonies of both magnificent and great frigatebirds and you can see them displaying their red balloons to attract a female. Blue-footed boobies nest in the ground and perform their famous dance in the open areas, while swallow-tailed gulls perch on the cliff edges. Land iguanas are common inland while their marine cousins bask in the rocks by the sea, close to sea lions, which often like to body surf in the waves.

Snorkel: This place is a really great snorkeling location, as it has tremendous diversity and amount of fish, but also sea lions, sharks, eels, turtles, rays and many more.

Then, transfer to the airport to take your flight back to continental Ecuador.