Our 8-day itinerary aboard the yacht Archipel I allows you to combine the seabird colonies of North Seymour and the exclusive Genovesa with the spectacular volcanic islands Bartolome and Charles Darwin Research Station. Moreover, you will have the chance to explore Española, the most southern point of the archipel and swim with sea lions in the Loberia, on Isla Floreana. 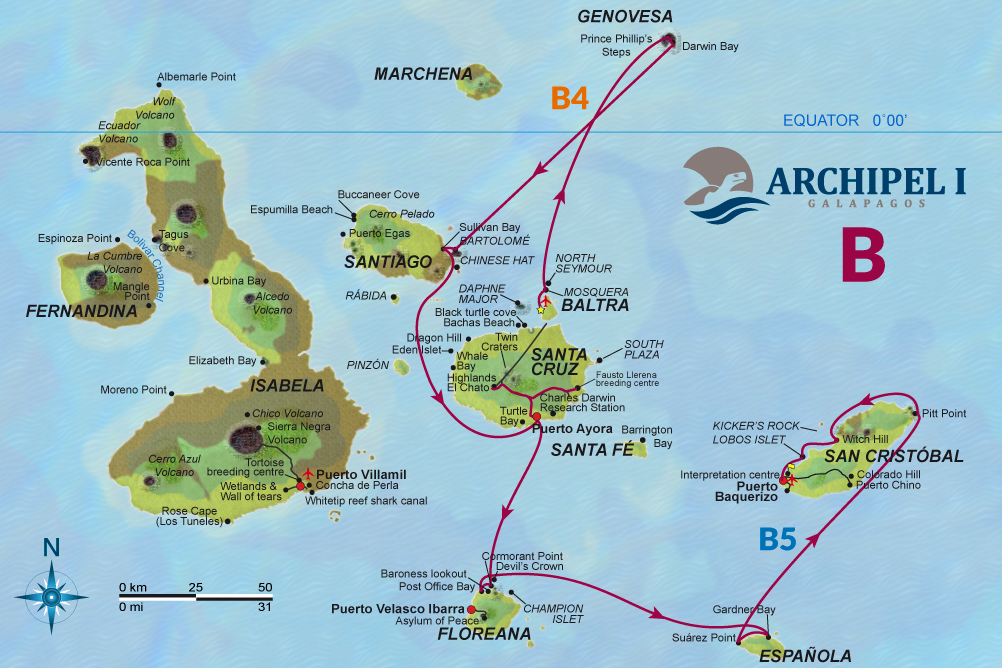 AM - Arrival at Baltra airport
Upon arrival at San Cristobal airport, you will pass through an airport inspection point to ensure that no foreign plants or animals are introduced to the islands, as well as to pay the park entrance fee of $100 (unless it has been prepaid). A guide will meet you, help you collect yourluggage, and escort you on a short bus ride to the harbour.

PM - Mosquera
Mosquera Islet is located between Baltra and North Seymour. This is a small islet formed by a geological uplift, with a reef of rocks and coral and a great white sand beach where a big population of sea lions likes to relax. You can also observe several species of shorebirds and the site offers great snorkelling and swimming. Along the rocks, it is common to see the red lava crabs and sally light-foot crabs.

AM - Prince Philip’s Steps (Genovesa)
Before landing, you will take a dinghy ride along the eastern arm of the caldera. As you approach, the soaring 25 m/80 ft high walls become overwhelming. Sometimes, a Galapagos fur seal is resting or a seabird is nesting on one of the ledges at the base. You will then have to hike and overcome the steep stairs from the landing dock to a bush of palo santo shrubs on top. Red-footed boobies gratefully use these scarce nesting places; so that they don’t have to nest on the rocky ground. Upon arriving at the edge of the rim, the bushes open up and you can enjoy panoramic views, a strong sea breeze and the amazing flying skills of countless seabirds. Following the exposed rim, you will first pass the Nazca boobies and finally reach the extensive storm petrel nesting places, where, if you’re lucky, you can spot the well-camouflaged short-eared owl hunting for food!

PM - Darwin Bay (Genovesa)
Inside the submerged caldera of Genovesa lies Darwin Bay, with a diameter of more than 1.5 km/1 mi and it is almost 200 m/650 ft deep. The small area will surprise you repeatedly, walking along a coral sand beach, crossing barren lava formations and creeks, passing tidal pools, shrubs and further ahead following the top of some cliffs. With these peaceful surroundings, every single species has occupied its ecological niche (or habitat) without disturbing others.

AM - Bartholomew
The beautiful volcanic islet of Bartholomew is among the youngest of the islands and, on a geological scale, was just recently born out of the fire. Although it looks lifeless at first sight, Bartholomew offers some of the wildest landscapes and best panoramas of the entire archipelago. To enjoy the postcard view of the idyllic “Pinnacle Bay” you will have to climb the stairs to the viewpoint on top of the island (114 m/375 ft). Enter a dramatic world of threatening (though extinguished) nearby spatter cones, craters, and lightweight lava droplets that have been spewed out by fiery fountains. The summit trail is also ideal for witnessing how scanty pioneer vegetation, such as lava cactus, struggles to take root in the bare virgin lava fields.

PM - Sullivan Bay (Santiago)
The arrival in Sullivan Bay is like a moon landing. The desolate, sprawling fields seem to be mostly lifeless, but this island, which is particularly popular among photographers, still offers a lot to see. There is even some life! Green sea turtles burrow in the small white sand beach, where you can also find crabs, blue herons and oystercatchers.

AM - Twin Craters and El Chato Reserve (Santa Cruz)
The native scalesia forest of El Chato Tortoise Reserve is the best place to search for Galapagos giant tortoises in their most authentic setting! Despite the interesting breeding centres – where you are guaranteed to find tortoises in their corrals – there is nothing better than to observe them in their wild environment. Though it can be quite moist and muddy, your visit may turn into an adventurous quest when they have left their favourite pond silently. The Twin Craters are found on either side of the road leading to Puerto Ayora. These impressive formations are not volcanic craters and were formed by magma domes, which hardened on the outside while the lava continued flowing inside, leaving huge and empty magma chambers that eventually collapsed, leaving two large holes. The craters lie within a lush scalesia cloud forest, a high-altitude plant species that are endemic to the Galapagos. This area is also home to the carpenter finch, which uses tools to search for food. There may also be opportunities to see the vermillion flycatcher, a small red-breasted bird.

PM - Fausto Llerena Breeding Centre (Santa Cruz)
At this site, you can observe tortoises that come from various islands of the archipelago. They comply with the captive breeding programme and then return to repopulate the areas where their population has been affected. The land iguanas of Santa Cruz, Isabela and North Seymour are also in a captive breeding programme, as the populations in these areas suffered from feral dogs. One of the main attractions is the famous embalmed Lonesome George. Estimated to have died between 93 and 109 years of age, it is recognised as the last of its kind and a symbol of the efforts invested to conserve endangered species. The captive tortoises are used to the presence of visitors, so it's a great place to take photos with them.

AM - Cormorant Point and Devil’s Crown (Floreana)
The peninsula of Cormorant Point forms the extreme north cape of Floreana, which exists out of smaller volcanic cones, covered by a tropical dry forest of palo santo. At the landing beach, you will be welcomed by a small Galapagos sea lion colony. The green sand on this beach contains a high percentage of glassy olivine crystals which have been blown out by the surrounding tuff cones. The “flour sand” beach on the southern side of the peninsula is made up of even finer white coral sand which feels very smooth on the feet. Parrotfish have pulverised it, grinding the calcareous skeletons of living coral. You can spot schools of stingrays who love the sandy bottom to hide. During the first months of the year, Pacific green turtles come ashore to bury their eggs. Devil’s Crown offers one of the best snorkelling spots in the Galapagos due to the coral reef in its centre, which attracts a lot of marine life. Here you can spot Galapagos penguins, sea lions, sea turtles, many different colourful fish and even some dolphins. The current can be a bit strong sometimes, so it should not be attempted by novice swimmers.

PM - Post Office Bay and Baroness Lookout (Floreana)
Historically, this site is the location of a wooden barrel that was placed there in the 18th century by the crew of a whaling ship. Letters found inside the barrel were collected and delivered by sailors returning home. There was no postage fee and, surprisingly, this mailbox and its honour system are still in use today. Although letters are no longer important messages from sailors to their loved ones, tourists leave thousands of them today and many still reach their destination. You can also relax on the beach, where in addition to Galapagos sea lions, Pacific green turtles and golden rays, you may see Galapagos penguins. This is the only place in the southeastern archipelago where penguins reside. You can also climb the small basaltic cone of the Baroness Lookout and enjoy the coastline’s paradisiacal views. This viewpoint was the favourite spot of one of Floreana's first settlers, the eccentric baroness and self-proclaimed "Empress of Galapagos" Eloisa von Wagner, who even built her house a few metres further back.

AM - Osborn Islet and Gardner Bay (Española)
The striking white beach at Gardner Bay is an important breeding site for Pacific green turtles. However, without a doubt, its main attraction is the Galapagos sea lion colony. Females stay year-round in this nursery, suckling their pups until they are three years old, although they start to fish at five months. During the breeding and mating season, the colony becomes even bigger.

PM - Suarez Point (Española)
Huge ocean waves crash onto the southern basaltic cliffs of Suarez Point, forming a spectacular blowhole, where the water sprays metres high into the air (depending on the season, the tide and how strongly the sea breeze pushes the waves). Take your time for a meditative break in silence on this emblematic viewpoint, and convert this unforgettable moment into a lifetime experience.

AM - Pitt Point
Two wind-sculptured tuff cones at Pitt Point make up the extreme eastern end of San Cristobal, thus the archipelago. These cliffs were the first sight of land when HMS Beagle and Charles Darwin arrived on the 15th of September, 1835. On the small green sand beach, you will be welcomed by a group of barking Galapagos sea lions. This is a bachelor colony, where males usually relax and prepare themselves for fighting and mating.

PM - Witch Hill
This site’s primary attraction is the coral sand beach; an excellent place to swim and snorkel. Witch Hill is the remains of a tuff cone and one of the first sites visited by Charles Darwin. It has an impressive landscape, where it is often possible to see coastal and migratory birds, including pelicans, blue-footed boobies and swallow-tailed gulls; as well as sea lions and marine iguanas. At times, the lagoon is completely dry and deposits of salt can be found at the bottom. The people of Puerto Baquerizo Moreno used to use the lagoon as a salt mine.

AM - Lobos Islet
The Lobos Islet’s beach harbours a colony of Galapagos sea lions. As in other colonies in the archipelago, you can approach nurturing females within a few metres. In the breeding season, this colony is also visited by territorial males, defending and mating the harem on their part of the beach. This low islet is home to more than just Galapagos sea lions. Two other emblematic species breed here: male blue-footed boobies and great frigate birds who try to impress the females (and tourists) with clumsy dances, heaving their striking blue feet or blowing up their balloon-sized scarlet pouches. During the breeding season, the fluffy and hungry chicks cry for food, and when their wings get strong enough, they will learn to fly. After this, assisted by the naturalist guide and some crew members, you will be taken to San Cristobal airport.

It has been a pleasure accompanying you on this unique trip and we hope to see you again very soon!